We come in Peace 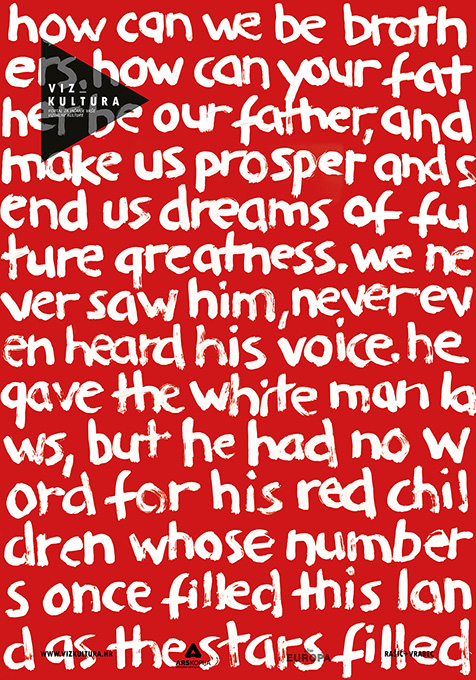 Plakatiranje ("Postering") is a project developed by the culture-related news portal Vizkultura. One poster and its authors are commissioned and presented every month. The author can choose any theme and the only requirement is to use the Vizkultura logo in a left upper corner.

The poster is inspired by a speech of a famous Indian chief Seattle that was allegedly held in the year 1854. The speech was addressed to the US president in response to an offer to buy Native American land for the purpose of building a railroad.

This poster draws a parallel between the current migration to Europe and the invasion of America in the past. Back then, the "superior" Europeans were taking land from the natives in various ways, and today we have the opposite situation when the "inferior" people come to an "advanced" and "socially aware" Europe in search of better living conditions.

Part of original speech: „So how can we be brothers? How can your father be our father, and make us prosper and send us dreams of future greatness? Your God is prejudiced. He came to the white man. We never saw him, never even heard his voice. He gave the white man laws, but he had no word for his red children whose numbers once filled this land as the stars filled the sky. No, we are two separate races, and we must stay separate. There is little in common between us.“

The poster had great feedback on Social networks.