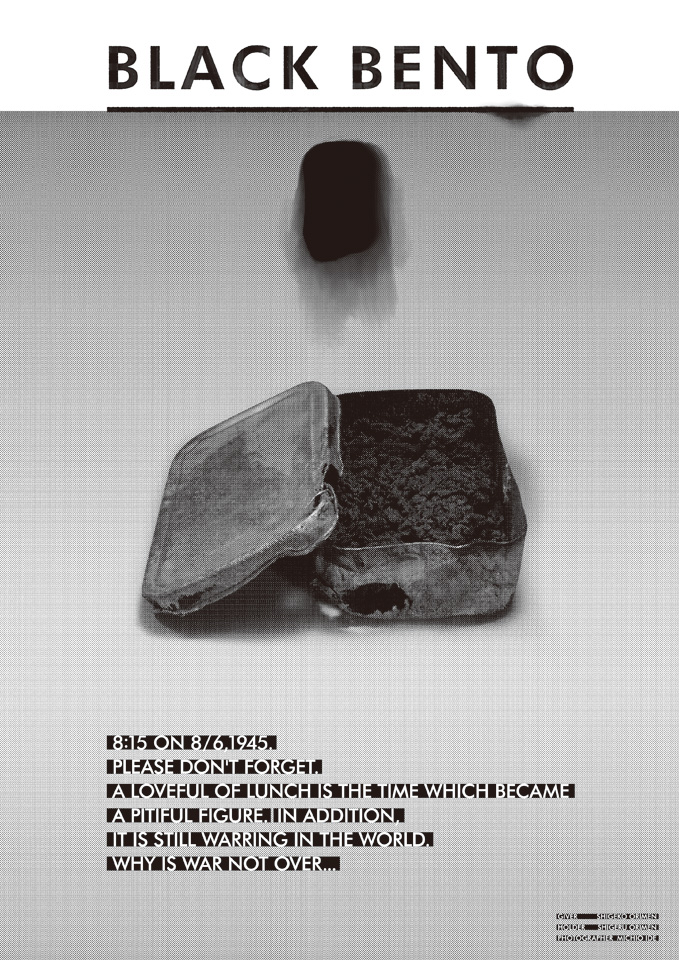 The Japan Graphic Designers Association Hiroshima area-sponsored peace poster exhibition "Hiroshima Appeals" will be held in Hiroshima in August every year.
This poster was made for that exhibition.
There is a lunch box which suffered from Hiroshima Peace Memorial Museum. An owner of a lunch box and Shigeru are a 1st grader of those days junior high school. For building removal work, I also left the house early in the morning with a box lunch on August 6. The one for which a mother made a dish of the box lunch with the cropper who harvested for the first time from the field Shigeru reclaimed. Mother sincerity was very glad about the box lunch which shut itself up. ※ The lunch box which is also a symbol of "love and peace". The, I couldn't take my eyes off the cruel shape that I was bombed. Because it's a bomb site, the theme as love is heavy. How should it be told? I had the lunch box among which free love was included much help while worrying, and produced. Don't forget it. Keep telling. Achieve it. A wish to Heiwa will also wish that many people appeal now by itself.

This box lunch symbolizes bombing and is exhibited to foreign countries many times in a year. The shape which is under BLACKBENTO was the icon mark which showed a lunch box, and expressed the state when an atom bomb fell.

The visitor of the show was about 1000 persons.
I think that the peace message was told at many people.