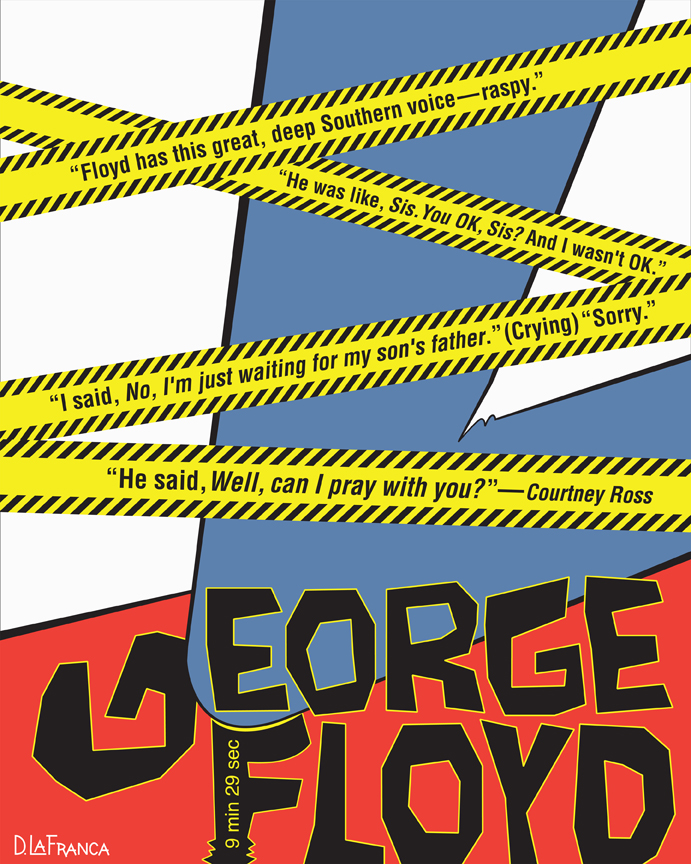 Empathy is one of the most essential keys to sustaining a civilized society, and it begins with the recognition of one another’s humanity. I wanted this poster to convey George Floyd’s humanity through his own words, the pain and suffering that he experienced, and the emotional devastation that his death left behind. I want it to evoke empathy in everyone who sees it, regardless of his or her race, political persuasion, or any other social identity.

The inspiration to design this poster came from watching witness testimony in Derek Chauvin’s murder trial. Floyd’s girlfriend, Courtney Ross, began crying almost immediately when she took the witness stand. She relived the first time she and George met. Ms. Ross was crying on that occasion too, and Floyd asked her, “ Well, can I pray with you?” The irony hit me in a flash, as I thought about the countless times in my youth that I kneeled to pray in church. The concept took off from there.
I wanted to use expressive typography and started experimenting with different elongated shapes slicing into Floyd’s name. Initially I tried traditional typefaces. I also wanted to give Ross’s testimony a concept-driven graphic framework, so I placed the entire block of text in one big bar of police tape. First drafts were emotionally and aesthetically lacking. I realized that I had to use hand-drawn type, as well as an actual representation of Chauvin’s leg and knee, and a zigzagging strip of police tape. Finer details were later added such as the thin yellow outline around the black letters to make them pop, the bulging folds of the pants behind Chauvin’s knee, the buckling of the letter ‘F,’ and the number of minutes and seconds that Floyd struggled to breathe.

Overall, I think the final result is successful. Aesthetically, it makes good use of color, pattern, movement, and positive and negative space. The type is effective in the use of quotation marks and italics to distinguish Ross’s words from those of Floyd and discordant hand drawn type for his name. The concept is clear and palpable. The response on LinkedIn has been positive. It has received 754 views thus far, as well as 15 reactions and one comment.