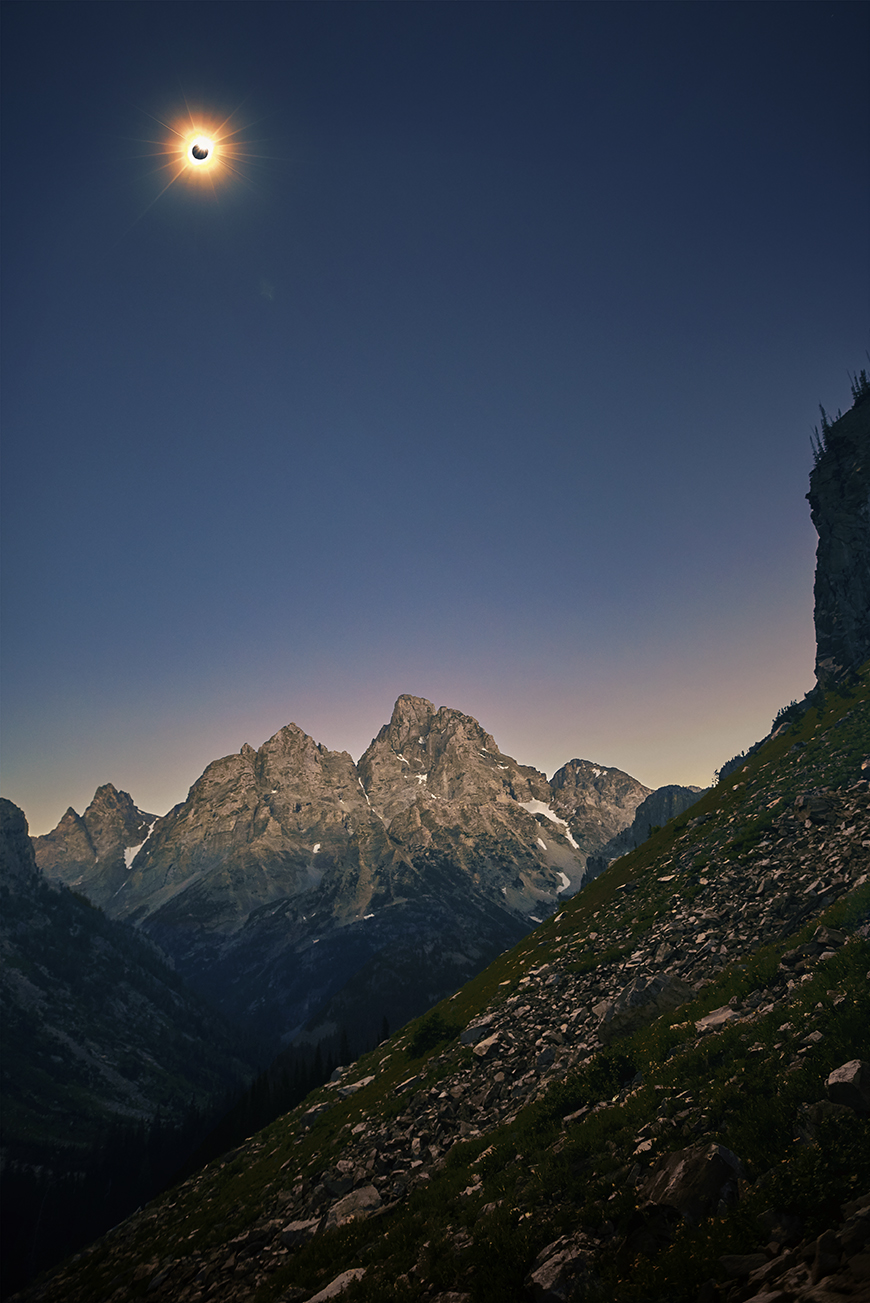 I knew I wanted to experience the total solar eclipse ever since I'd heard about it a year ago. When I found out it was going to be passing over southern Grand Teton National Park, I knew I wanted a shot of the eclipse over the mountains. I'm an avid outdoor enthusiast and try and spend as much time as I can in the backcountry, so I started planning to get in the backcountry and off the trail in order to shoot it. My goal was to get an image, or series of images, that captured the eclipse over an epic landscape. I knew I wanted a context to place the eclipse, not just a shot of the sun.

The obstacles I had to overcome were several. First, I had to find a suitable location that had both mountains and sun. I also knew the sun was going to be quite high in the sky, as totality would happen at 11:35am, so I would need to figure out how to fit both the landscape and the sun in the frame. Second, I'd never shot a total eclipse before, so I had no idea what to expect with regards to exposure. I knew I'd shoot from a tripod. I also knew I didn't need to worry about solar filters, as I wouldn't be shooting the sun directly. Beyond that, I wasn't sure what to expect. I had settings in my mind that I would try within the first 30 seconds of totality, but they were just educated guesses. I arrived in Grand Teton National Park on Wednesday before the eclipse (Monday). On Thursday I began scouting. I knew that I would need to be west of the mountain range, so that I could turn around and look back to the east, where the sun would be. I first chose a route into Cascade Canyon and then breaking out of the canyon to the northeast. After hiking 7 miles into the canyon, and passing The Grand, Mt. Teewinot and Mt. Owens, I started gaining quite a bit of elevation, and came across a boulder field that scaled a mountain to my south, and ended below a cliff line. The field was vast and steep, with no trees blocking the view of The Grand. I counted myself lucky that on my first scouting trip I'd found a prime spot to shoot the eclipse! I had a perfect view of not just any mountains in the park, but Grand Teton itself. I marked the spot on my GPS and decided that on eclipse day I would scramble up the boulder field to find a spot to shoot. I did scout several other canyons in the subsequent days, one of which was as close to the center line of totality as you could get, but none of them offered the view of the first one. On eclipse day, I left my campsite at 5:00am. On the way I saw two bull moose right off the trail, only about 20 feet away! I knew it was going to be a special day. I arrived at the boulder field at 9:15, about an hour before partial phases began. I started up the boulders and saw just below the cliff line a large, flat-topped boulder that would be perfect to shoot from. In fact, it was large enough for three of my friends, plus one german shepherd, to lay totally sprawled out with all our gear. After arriving at the boulder, I set up my camera, checked the position of the sun, and knew that the shot would have to be vertical orientation to capture everything without resorting to doing something like a vertical pano. I wasn't so keen on that, as I also wanted to enjoy the eclipse and not be messing with my camera too much when totality happened. It took my about 20 minutes to find a composition I was happy with, then I just had to wait for nature to take its course.

The onset of totality from the partial phases was something I can't describe. It didn't just get dark. The whole character of light and color changed. Everything started to look as though we were looking through amber polarized glasses. Mid-tones were all crushed, there was no glare at all off of anything. The deep blues of the sky began to turn purple. Then totality happened and everything got surreal. I had to make some quick adjustments to my exposure and started shooting brackets from a cable release. I wasn't really paying attention to my camera any more as I was completely enthralled by the heavenly event. The corona was the whitest light I'd ever seen, but was also something you could look at with your naked eye. The sun was completely gone and in it's place, a black hole. Totality lasted 2:10, but it felt like 30 seconds. All of a sudden one of my hiking buddies shouted "the diamond!" which is the point at which the moon begins to move away, and partial phases resume. The phenomenon sends out shooting rays of light, as though light were glinting off of a diamond ring. When I got a chance to review the images, I knew that my pick would be from this moment. The rays of light were just incredible. Overall, I'm very happy with the results and I've been getting great reactions from people who have viewed the photo. Most of all, I feel very lucky to have witnessed this in person. While I like my photo, any photograph can't do it justice. It's something I recommend everyone try and experience for themselves, even if they have to travel outside of the country. Of course, in hindsight there are a few things I would do differently, but overall, I'm very happy with the results.