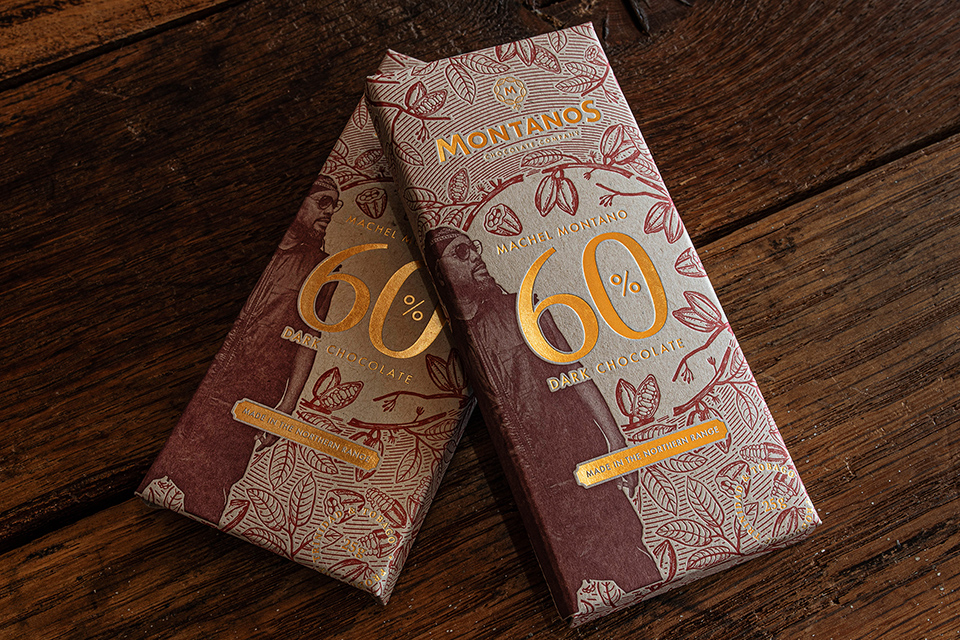 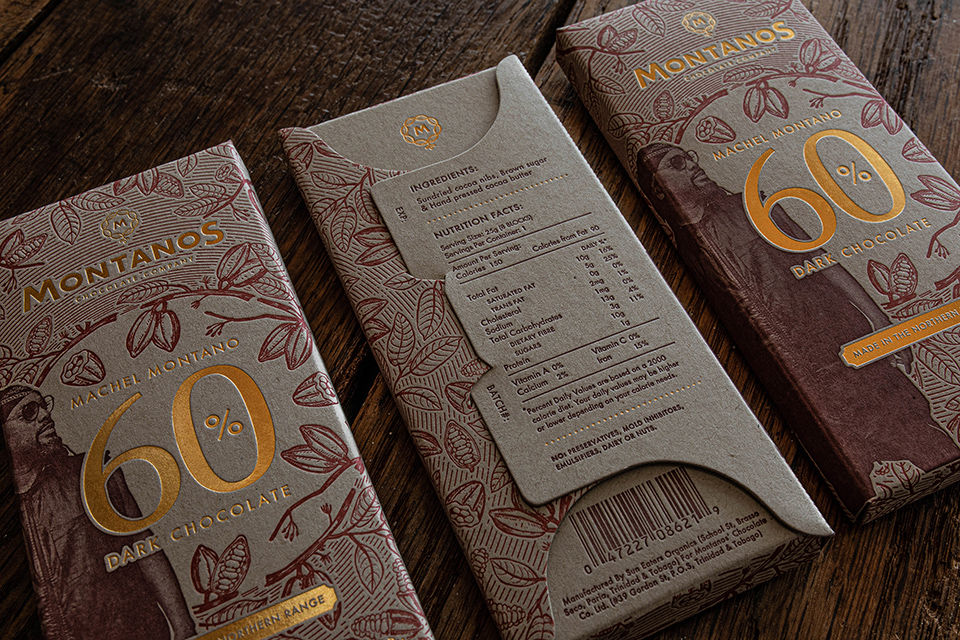 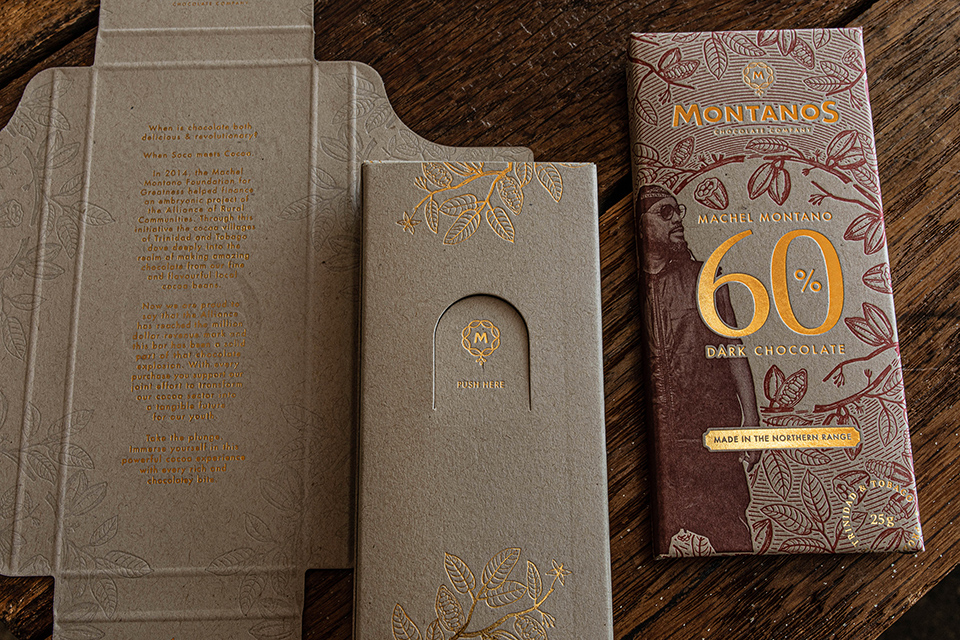 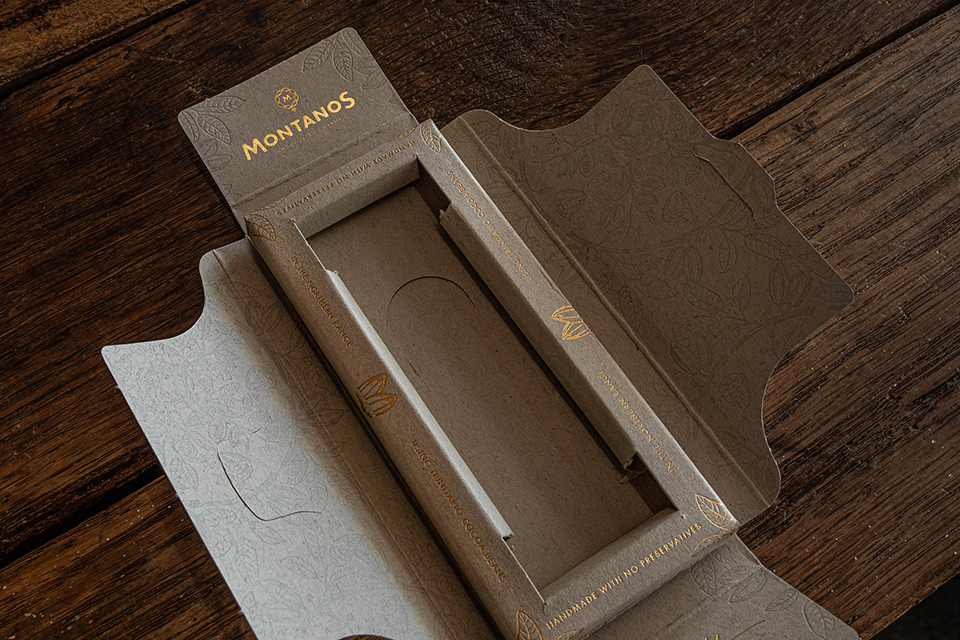 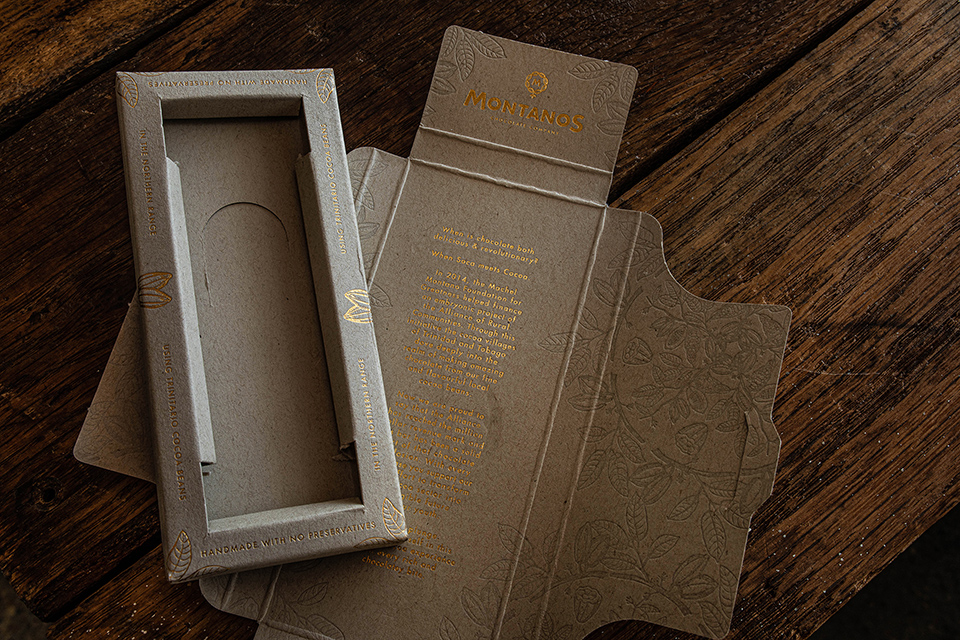 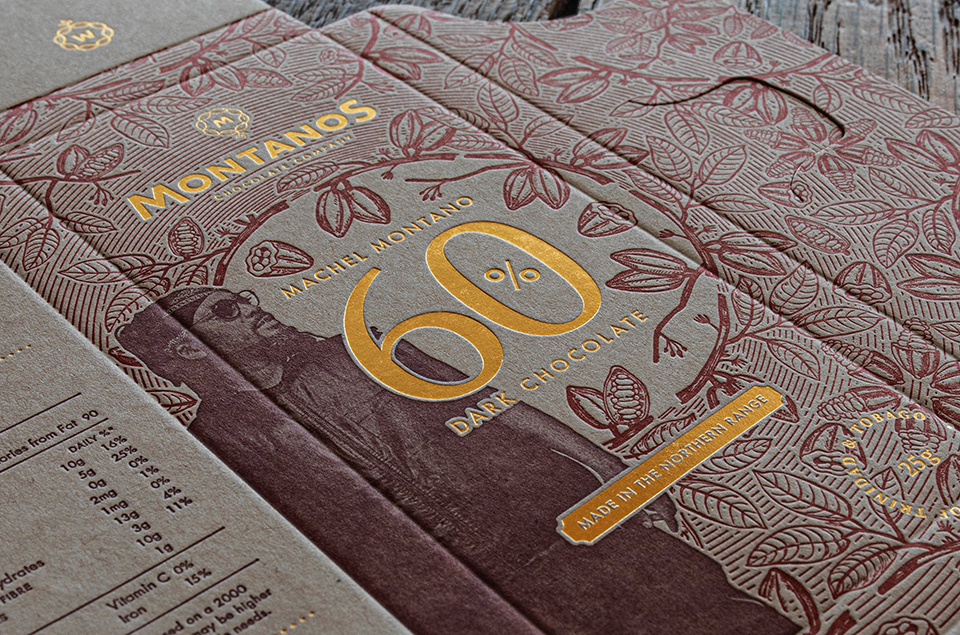 When we were initially approached by the Montanos’ Chocolate Co. (MCCL), the task being presented was to re-design packaging for their already existing Machel Montano 60% Dark Chocolate bar. They needed a new look, mainly for the updated size and price point of the bar. They were also ready to make a serious entry into the dark chocolate market abroad while maintaining appeal to the existing local and regional market. It became immediately apparent to our team that the design process needed to start with an identity development exercise, that would give them a brand that could be built on. Something that could become a recognisable stand alone entity and even house hold name, beyond just the musical fame of the brand’s primary ambassador. With this in mind a new identity and supporting materials were developed and translated directly into packaging for the flagship chocolate bar.

A key aspect built into the goals of the identity and packaging development included bridging the mass market appeal of Trinidadian Carnival, and Machel Montano’s role in it, with the more refined appeal of a sustainable dark chocolate brand. We also had to ensure for the local market requirements, that this new smaller mould size of the bar would still be able to stand on the shelves with an eye catching presence, as opposed to be being overlooked due to size and impressions of quantity vs quality with respect to value of an item. Another key aspect to be considered was the sustainable practices being observed in the creation of the chocolate itself. Along with local chocolatiers and community development group ARCTT, the MCCL was founded with goals of fostering legal and sustainable ways to help local farmers and their communities take control of their lives financially and make use of the world renowned Trinitario cocoa beans which are grown locally. With these along with a couple other key points in mind, we began the identity process with a questionnaire (Our ‘Firestarter’) and small interview that helped to isolate the ideal verbal representation of their brand which we would be able to translate into visual and physical deliverables that while uniquely Trinidadian, would have global appeal.

One of the pre-requisites for the packaging development was the presence of Machel’s face on the package, to utilise the brand equity and quality assurance that has been built among the global Caribbean diaspora over his 30+ year career as an entertainer. With this, we dove into Machel’s dual persona and spiritual interests in personal growth as a main starting point for the visual research in building this legacy brand. It took us through various visual elements seen in Hindu and Buddhist mandalas. We then explored mala beads, which he would often wear and the significance of their tassels, and by extension the ties to the lotus flower and its symbolic references to resilience and growth. We found these aspects tied perfectly into the history of the Trinitario cocoa bean’s history. In the mid 1700s in Trinidad, in an area that would later become Machel’s home town of Siparia, the Criollo cocoa crop was almost completely wiped out by a hurricane but was interbred with the Venezuelan Forastero strain and the combination of the two, along with the unique soil conditions of the area gave birth to the bold flavours of Trinitario Cocoa.

We then tied these eastern visual elements to prevalent design cues that can be seen in Trinidad’s Carnival; both in costume design and our locally invented steel pan. Our Carnival by nature is a smashing together of cultures, with its origins routed in Africa, adopted by the Greeks and Romans, reinterpreted by the French, and then unknowingly reclaimed by the descendants of African slaves to later include the strong influences of Indian and East Asian cultures present in Trinidad’s rainbow populous. We further included from our history, some design cues that were left over from our days as a colony of British and various European crowns. These aspects were drawn from carvings the can be seen in our architecture, and even our currency, notably our red one dollar bill. With the final considerations made toward the cocoa pod itself, the identity was born and out of the same sensibilities the illustrations and typography on the packaging. We worked with a local illustrator to develop the pod and leaf elements, which were used to create the geometrically arranged, yet overgrown illustration style, which we felt tied into the honest underlying subtleties of life in Trinidad.

The design of the box itself was influenced heavily by the need to give the smaller bar greater presence in a mass market shopping location. We wanted to give it the presence it deserved as a high quality product, without ever making the consumer feel tricked in any way by a smaller bar inside a bigger box (the potato chip bag conundrum). We drew inspiration here from packaging design of a fine single malt scotch. The way it’s nestled into an inner bracket of its own, which makes it feel well presented and protected as a precious heirloom would be. The outer sleeve we wanted to bloom in a simple manner, to present the hidden treasure, so for this we called back to the references to the lotus flower and used a closing mechanism that would allow it to stay firmly closed on it’s own, once the vegan sticker seal was removed.

Initially we considered locally available offset printers to achieve the finished box, however the board materials available and the finish they were able to execute to achieve the desired look weren’t in keeping with our requirements for a sustainable package with a feel of accessible luxury. The boards were bleached and coated and the foil stamp wasn’t able to achieve the level of detail to create the symbol, and finer accents. At this point we changed our considerations toward letterpress printing and reached out to Minnesota based Studio on Fire to work with us on the project. This shift opened the door for us to have access to uncoated recycled boards such as the Neenah Kraft folding board used, and brought a dimension of physical texture that embossing and varnishing available on the offset press would not have been able to express in the same manner. With the back and forth help of the Studio on Fire team we were also able to refine the edges of our box and saw the introduction of the push element at the back of the chocolate bar bracket to allow for easier removal.

Designing for a global market, from the point of view of a small Caribbean island with a population of only 1.3 million can be a challenge. Aside from some of the restrictions in print processes and paper stocks available, there comes an educational component for any designer, daring to step out of the communally familiar.

For this project, we were fortunate to work with a client who was ready and excited to learn and grow beyond the familiar to achieve a higher standard. Despite the project starting as a request for a quick revision of a flat, digitally printed bar sleeve, the team, hand in hand with the client, had expanded the vision for the project into a venture not yet taken on by other local chocolate producers.

This resulted in being able to produce a package that matched the flavour standard set by our internationally renowned cocoa beans. The client was then in a position to have the bar welcomed with open arms into the boutique shops of various western and eastern global chocolate distributors regionally and internationally.