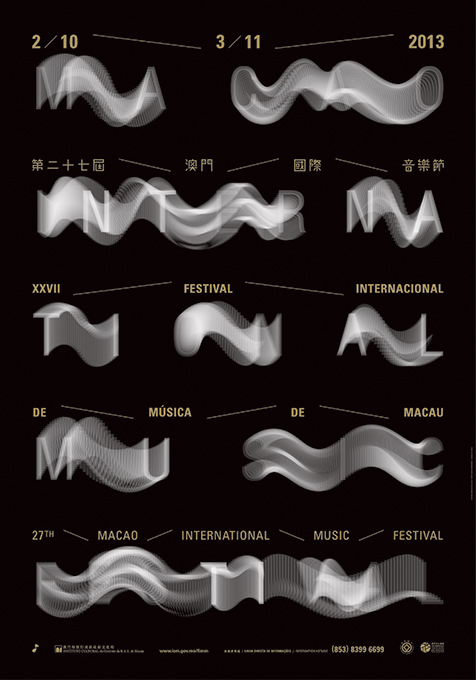 The Macao International Music Festival has been a melodious music journey since 24th October 1987. It is an annual event held by the Cultural Affairs Bureau of the Macao S.A.R. Government every year inviting world-class musicians to perform for the local citizens. The Macao International Music Festival features around twenty programs every year performed by world famous musicians and orchestras. The annual congregation, together with whirling notes and enthusiastic resonance, creates a channel for musician from all over the world to infuse into the pulse of the city. This broadens the horizon of the city to a global level through music and enhances the artistic humanism of the citizens. The annual Festival will have it’s brand new theme and visual elements to express the remarkable essence of the event every year.

The Festival has been developing over the last three decades in Macao, as a local citizen at the same time a senior graphic designer of the Cultural Affairs Bureau of the Macao S.A.R., Leong Chi Hang, had been responsible for the visual design of the whole Festival for over years. The concept of this visual design is to imitate the baton’s movement of the conductor while performing on stage, every single move brings in an new tune from various instruments, and finally it comes to the whole picture of the piece of harmonious music. The baton strongly represents the initiation of all, about the rise of melody, the participation of the orchestra, the focus of the audience and all in all, the Music Festival itself. This poster demonstrated those touching melodies during the performance in the Macao International Music Festival via abstract illustrations. This visual image of the baton movement of the conductor was also further developed into various number of posters for the twenty and more different music program of the Festival, each program will have their sub-poster, expressing its music story with the same visual element throughout the Festival, which at the same time centralized into the one main theme of the year.