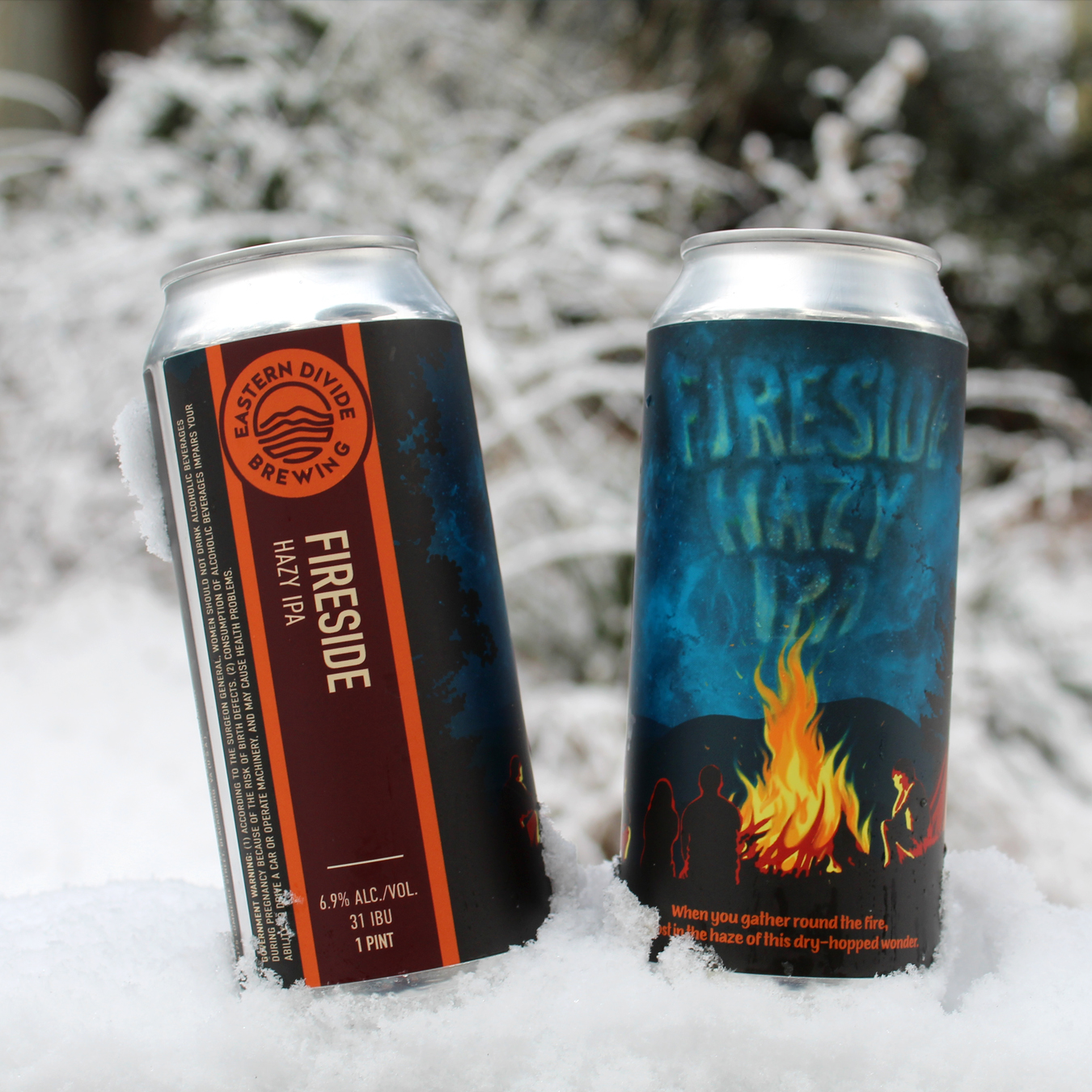 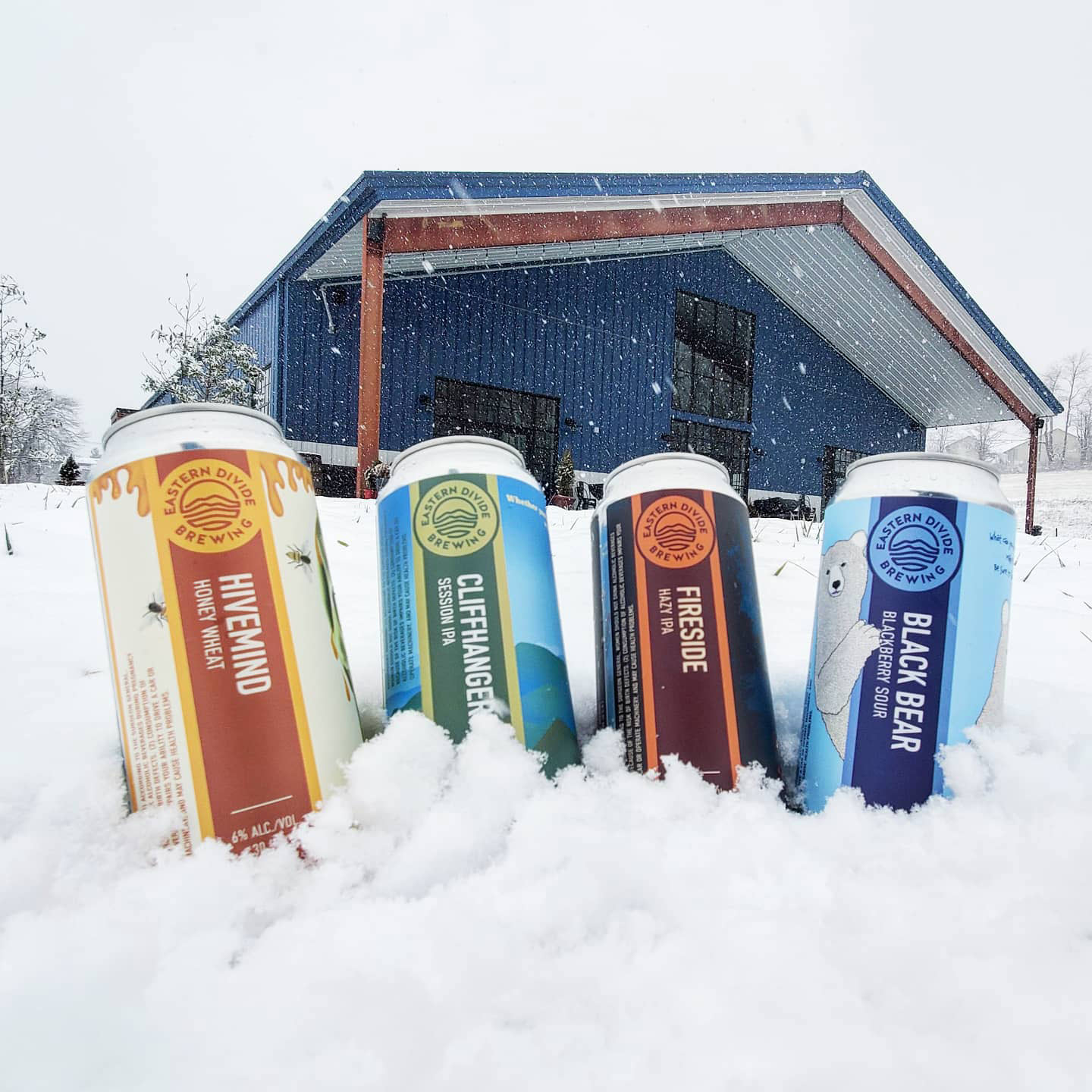 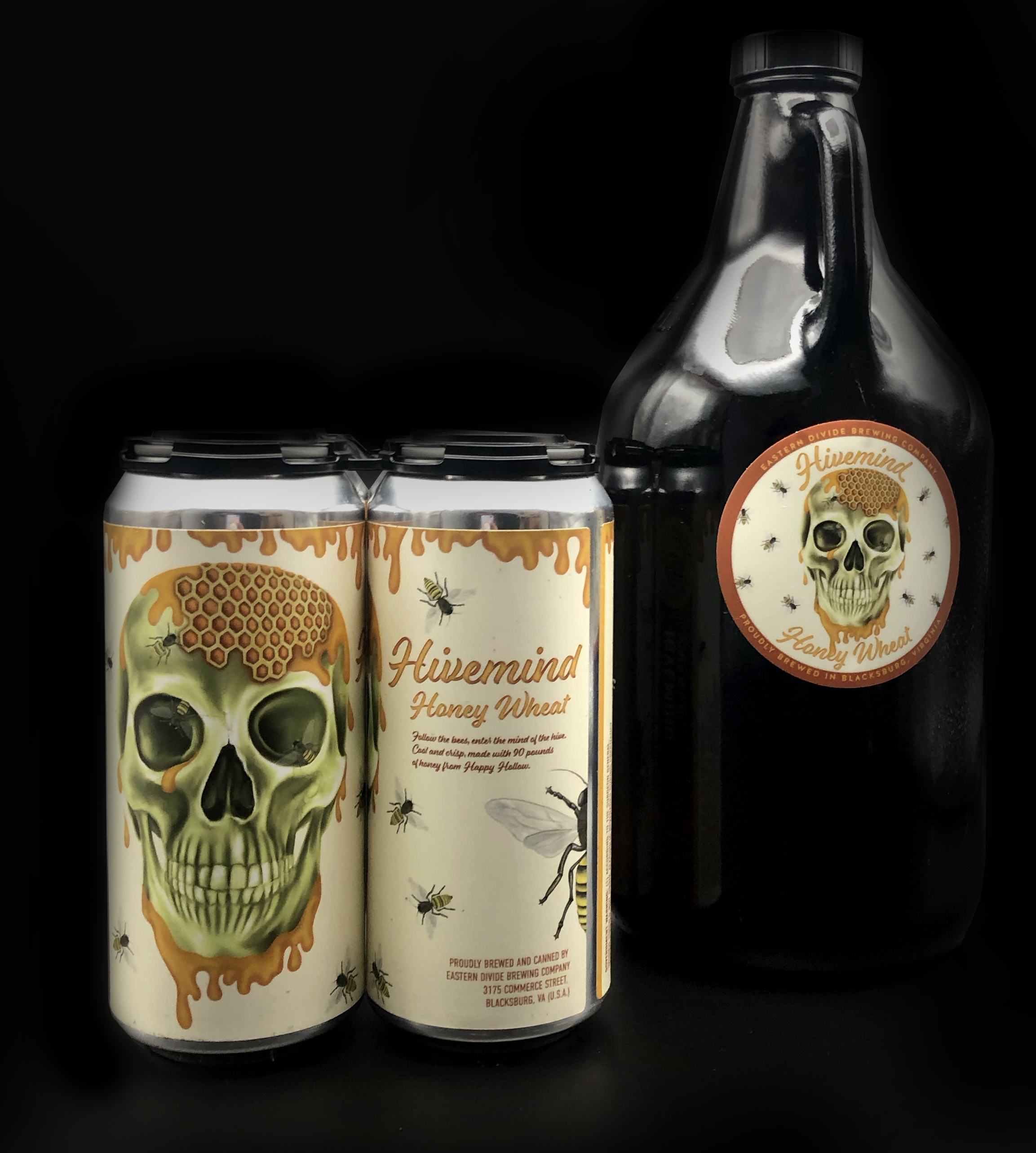 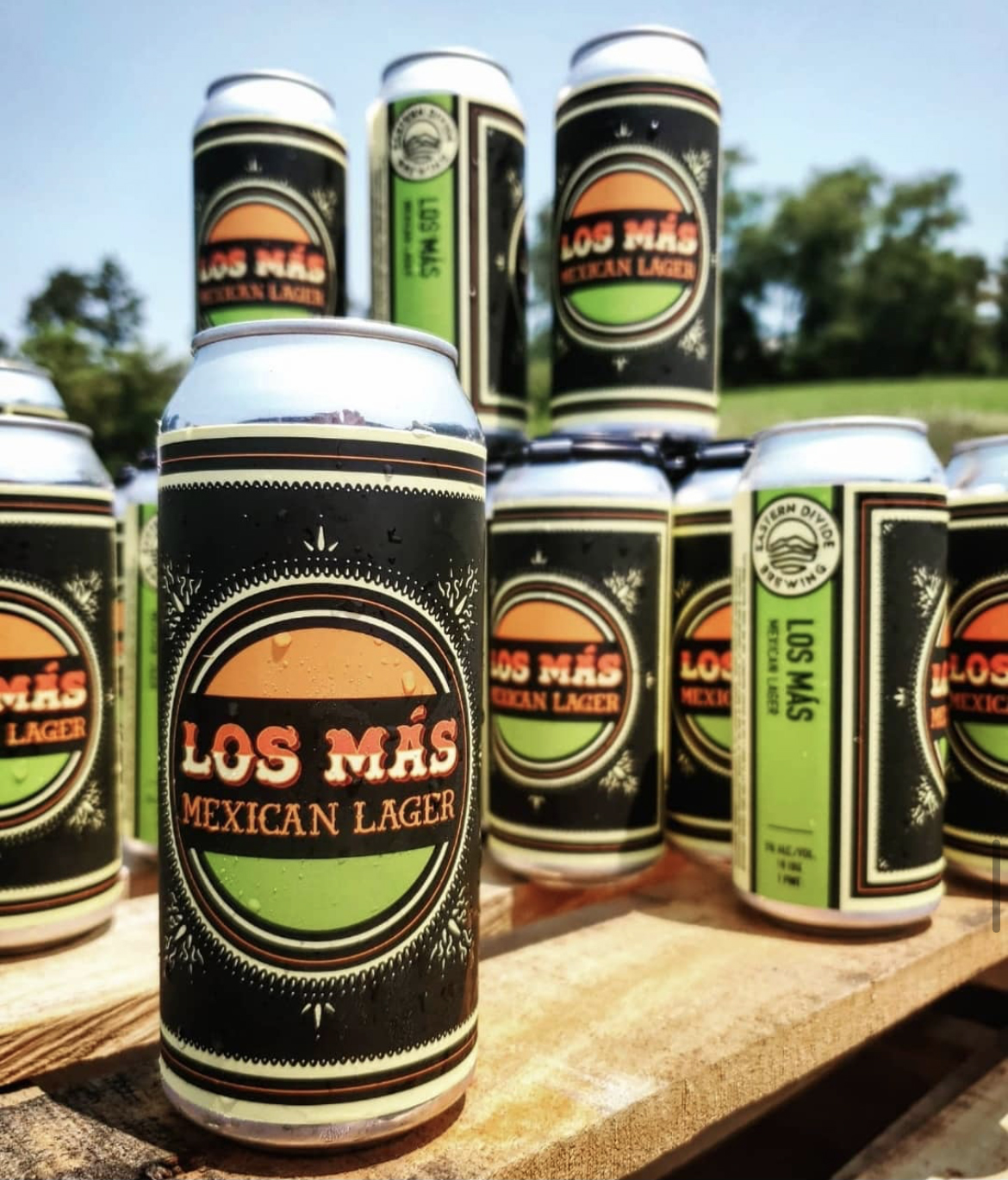 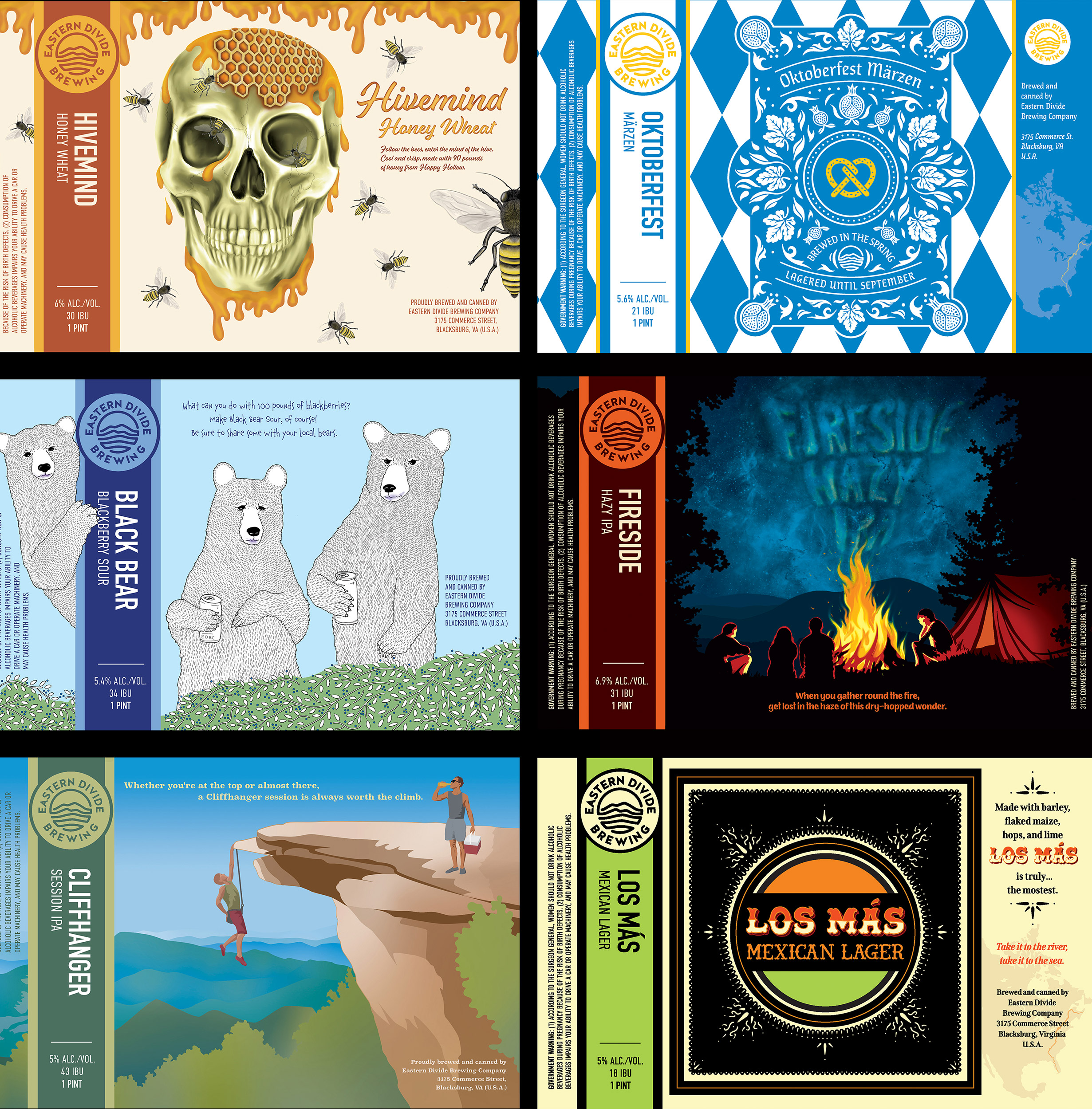 Eastern Divide Brewing Company decided to begin canning their beers to offer customers easy 4-pack to-go options and they are working to increase distribution to additional retailers. I both developed a label-design system and a series of illustrations for their series of canned beers. Because the client wanted to have illustrations featured for each design, I chose to develop a vertical band design for the primary text, which maximized the illustration area. The vertical band colors change based on those used in the imagery.

Eastern Divide wanted to have a “primary” illustration style, which we describe as a retro travel poster aesthetic. Their location-based beers follow this style (such as the Indie Park Ale and Cliffhanger). Each location that has been selected is based along the Eastern Divide. For example, the image on Cliffhanger Session IPA is an illustration of McAfee’s Knob, a popular hike (with spectacular views) on the Appalachian Trail. The imagery on Indie Park Ale is a bit closer to home, in that it is based on the highway exit sign you’d see when you arrive in Blacksburg, Virginia. The brewery itself is located within an industrial park (hence the name Indie Park).

For their “secondary” illustration style, Eastern Divide embraced funky outliers and humor. The illustration for Hivemind Honey Wheat was based on a sketch the brewer, Brandon Roberson, had done for the menu signage (and what could be a better symbol of the pandemic than a skull with bees crawling out of the eye sockets?). For the Black Bear Blackberry Sour, I chose to illustrate sour (grumpy) black bears, with lips stained from eating too many blackberries—and they, of course, are also drinking Eastern Divide beers.

Each illustration also includes a bit of an Easter egg. Included somewhere on each can is the shape of the Eastern Continental Divide line (e.g. it is the central crack in the skull on Hivemind and it takes the shape of one of the mountains on Cliffhanger).

Eastern Divide has had tremendous success selling its beers and has extended the designs to additional merchandise (stickers, apparel).