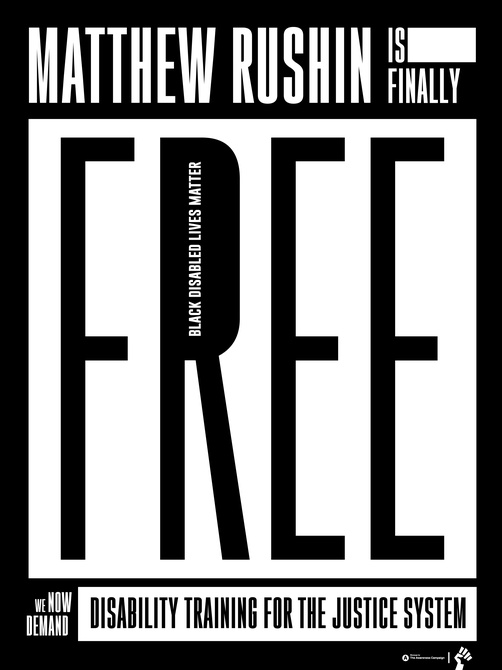 Matthew Rushin's criminal case in the state of Virginia is a prime example of ableism in the justice system.

Matthew, a black male on the autistic spectrum, had a seizure while driving, which caused two separate car accidents in 2019. Due to the disoriented behavior, it was believed by police that he deliberately caused the accidents. They thought it was an attempt to kill himself. Autism experts and his family both said that his behavior after the accidents is not uncommon for people with austism in high stressful moments. Matthew was persuaded to sign a plea agreement without his advocates present. He was imprisoned for two years but is now free from serving a 50-year sentence. Matthew received a pardon from the Virginia Governor, Ralph Northam.

The poster calls out the ableism, especially towards people of color, that regularly occurs in the justice system and demands that there needs to be disability training for all criminal justice personnel. The poster will serve as promotion material for The Awareness Campaign, a campaign that speaks to overt and covert ableism.

There was no need for imagery to communicate what happened to Matthew Rushin. Big typography in black and white is all it took to develop a design solution for the poster.

Through the various channels of The Awareness Campaign, the poster will be distributed to bring about the awareness of the ableism and racism that black people with Disabilities have and continue to experience