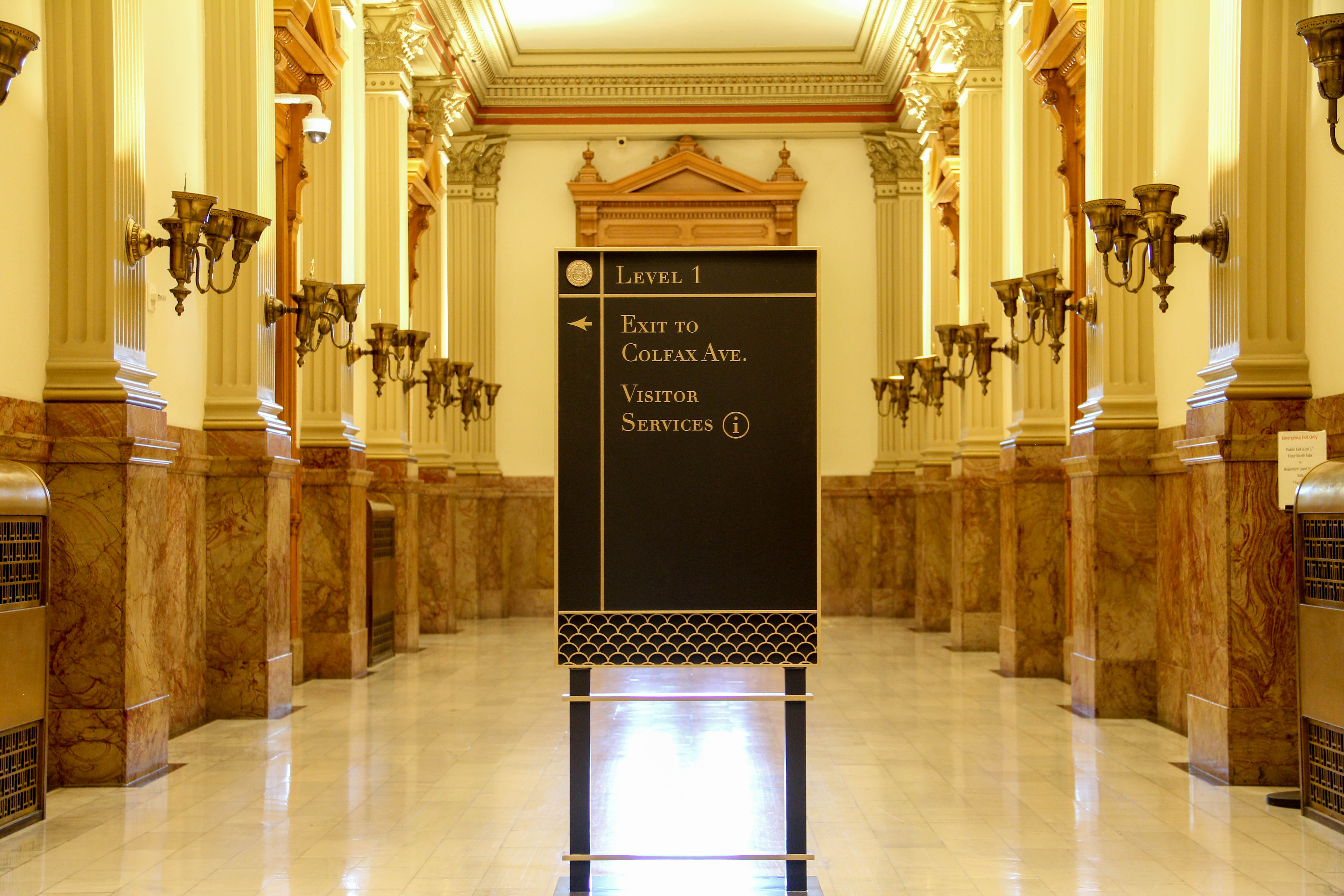 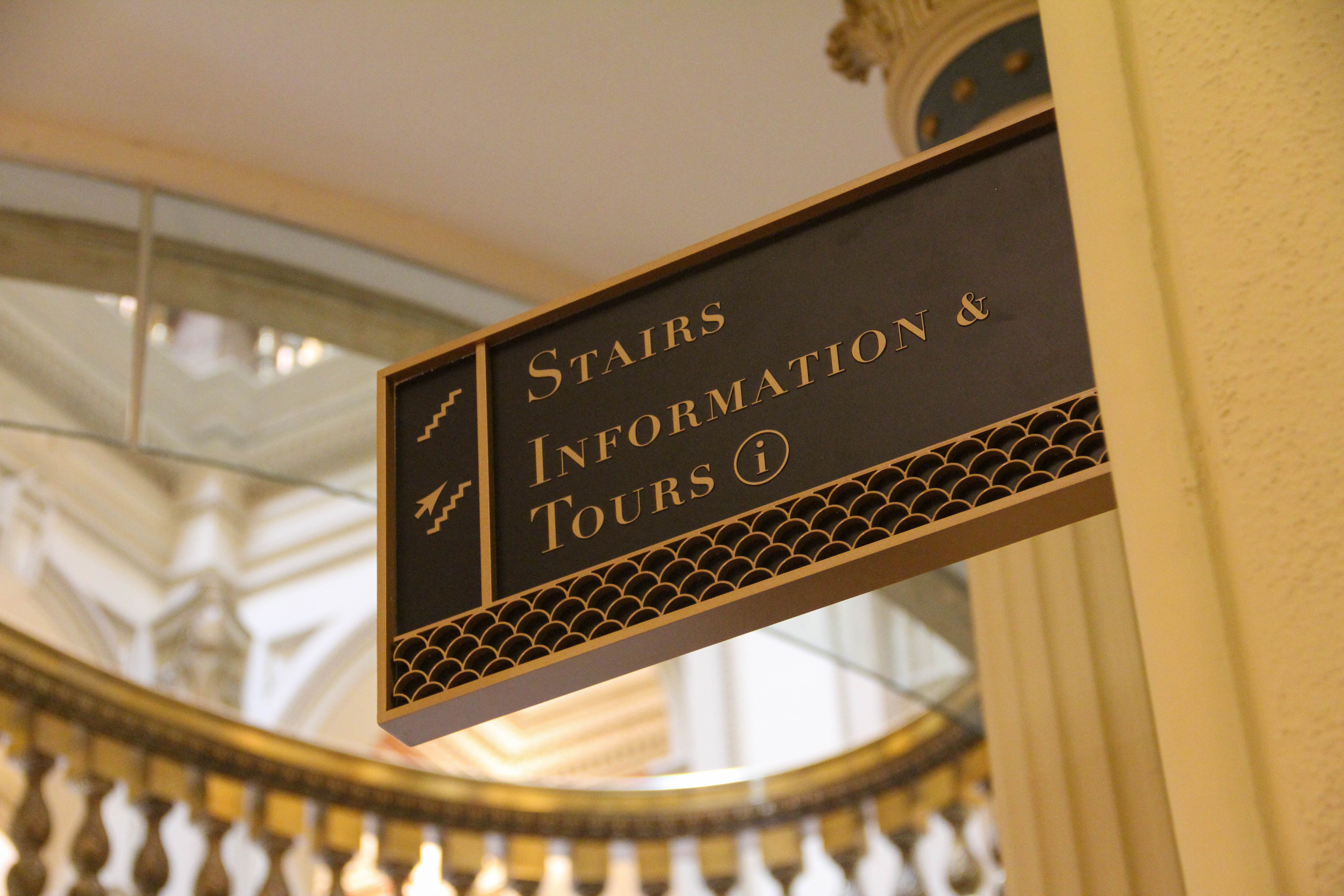 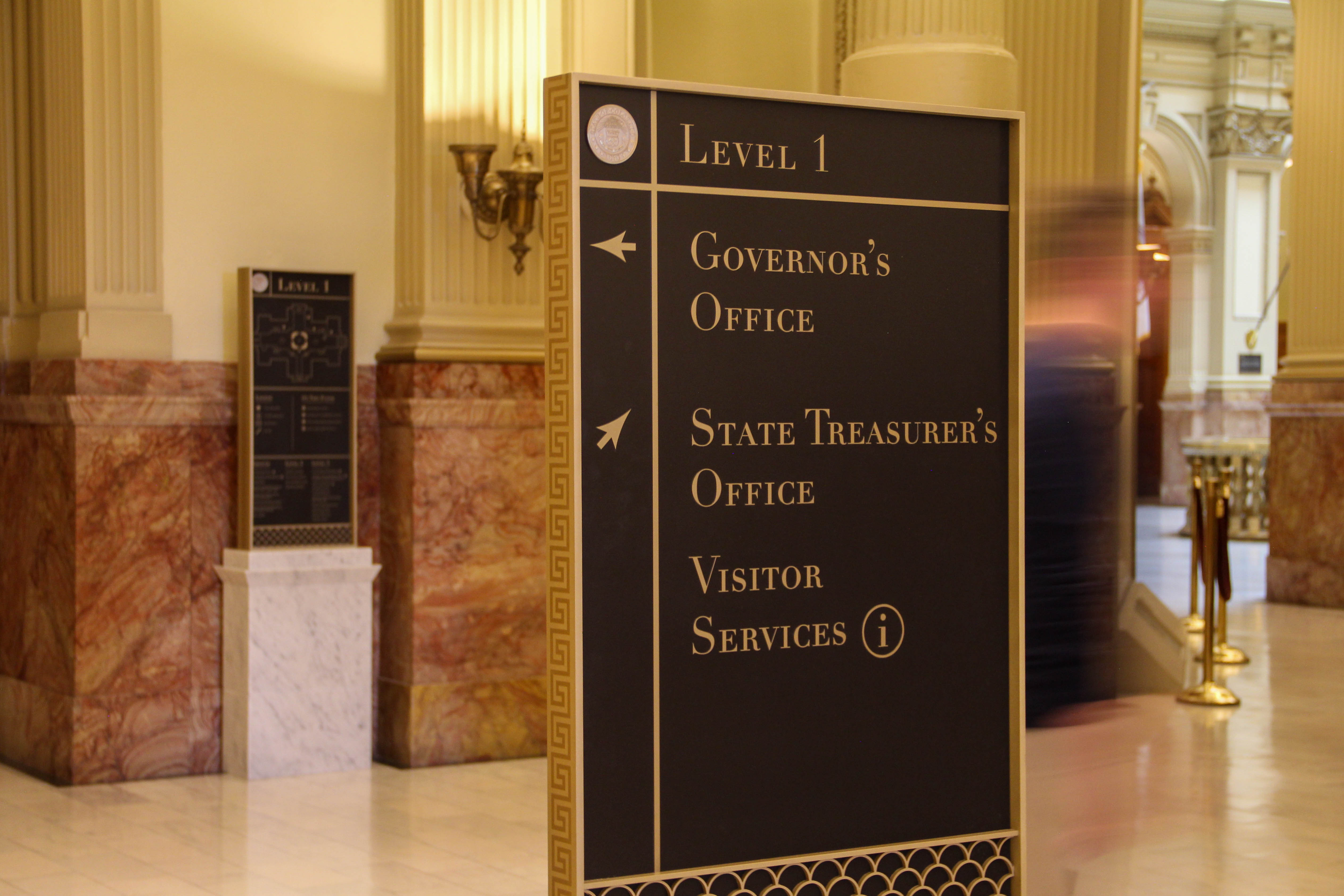 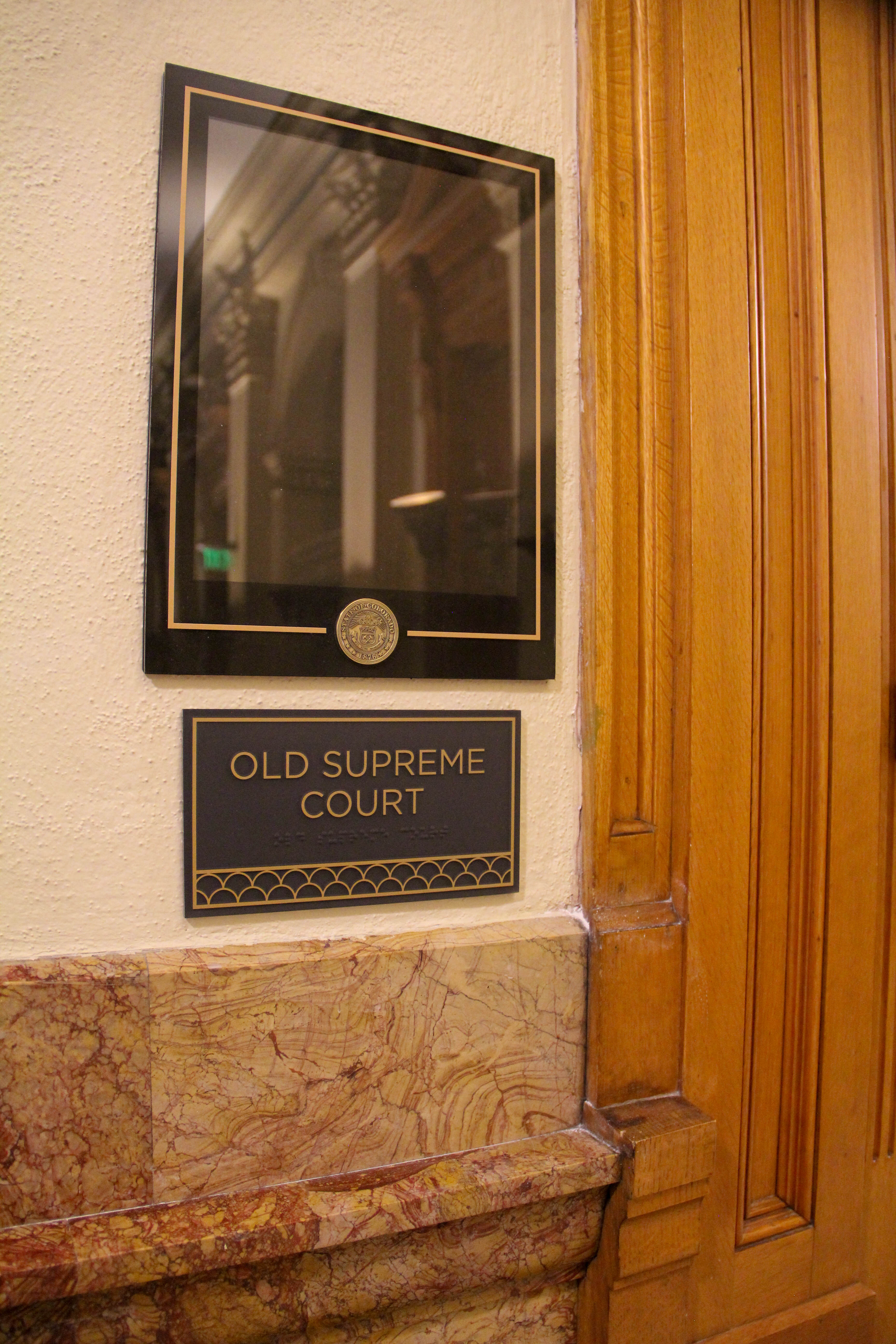 The Colorado State Capitol is one of Denver and Colorado's most iconic buildings and is famous for its official mile-high elevation marker. Its stunning gold dome, a nod to Colorado’s gold rush history, is one of the state’s most recognizable landmarks and the Capitol Complex is one of Denver’s most visited tourist sites, as well as being home to the seat of the state’s government. The State Capitol building and the Legislative Services Building across the street are both National Historic Landmarks, as well as landmarks in the City and County of Denver. Both buildings house lawmaker offices, government services and staff and both have distinct architectural styles, creating a charming juxtaposition, but with visible differences in design. The design team created a system of wayfinding, identification and interpretive signage for both buildings and accordingly resolved the buildings’ navigability issues, making the people’s house more accessible and intuitive to its diverse and constantly changing visitors.

Colorado State Capitol staff representing a diverse group of stakeholders determined that the historic State Capitol building was difficult to navigate due to its architectural features and symmetry and its changing uses throughout the typical year. After years of haphazard attempts to improve the wayfinding in the complex, layers of ineffective and confusing signage clutter had accumulated throughout.
With lawmakers, lobbyists, staff, visitors, school groups and the public making use of the building in diverse ways throughout the year, the need for effective signage and wayfinding was especially pronounced. Additionally, the state capitol, being the People’s House, needed wayfinding that was more inclusive and intuitive to a wide and often changing range of non-English speaking visitors. Another key challenge facing the design team was the various ADA vs. non-accessible pathways into and throughout the building. In the same vein, the building is largely divided into sections that correspond to the House of Representatives, Senate, Governor, Treasurer and other state staff, so it was imperative to address this with the wayfinding system.
In addition to traditional wayfinding, the design team was also challenged with creating a unified system of identification and interpretation signage to address the needs of the complex’s Visitor Services. Some of the Capitol’s most iconic visitor destinations are not intuitively accessed from within the building, or even the campus and required clarified pathways, verbiage and nomenclature to alleviate the wayfinding issues. Additionally, the design team was also asked to develop a permanent way to honor the Native American tribes of Colorado in a flag-raising ceremony that would take place during the project.
This project also addressed wayfinding at the Legislative Services Building across the street from the Capitol, which had its own specific wayfinding challenges. While being more intuitive on the interior, the building has a prominent engraved sign that reads “Colorado State Museum,” a historic and protected remnant of the building’s original purpose. Due to this sign, many people oftentimes did not know where to find the Legislative Services Building even though it was right in front of them and visible from the Capitol’s public south-facing entrance and exit.
From an aesthetic point of view, the new wayfinding system also needed to integrate appropriately into the historic context, while taking into account functionality, visibility and legibility. A significant visual factor in the interior of the Capitol Building is the iconic Colorado Rose Onyx wainscotting which comprises the world’s total known supply of this type of onyx. Due to this unique feature, signs had to be carefully placed so as not to touch or damage this irreparable and irreplaceable material. The design team was also tasked with designing a visually unified wayfinding system to lead between the two buildings, while also ensuring that the design was appropriate for the context of each building, their evident architectural differences and within the campus overall.

The State Capitol building is an architectural and historic jewel in Denver, and the design team strove to ensure that the proposed designs were respectful of and referential to its historic context, but in a contemporary way. The design team combed the building for unique details to incorporate into the design, such as a simple scallop pattern on the risers of stairs, Yule marble flooring, a Greek key pattern etched into glass or the state seal cast onto antique doorknobs. The use of gold was inspired by the state’s history with the Gold Rush and the building’s famed dome. Other moments of inspiration came from the (literally) one-of-a-kind Colorado Rose Onyx wainscotting found throughout. By incorporating these details into the design, the end result was a delicate balance between old and new, allowing the signage and wayfinding to contribute to the rich layers of history in the building.
The design team met with project stakeholders and conducted extensive visual, brand and positioning exercises to learn about the history of the building and hone the wayfinding’s eventual look and feel. This included listening sessions and workshops with the various users of the building, security teams, legislators and representatives of the Governor. Additionally, representatives of the Office of the State Architect and state historian lead the design team on extensive tours of the building, including to many spaces not normally accessible by the public, including the top of the gold dome, the tunnels under the building, the House and Senate chambers and archives.
The design team researched the many ornate architectural details throughout the complex for inspiration and carefully developed an eventual design direction appropriate for such a grand setting. Working with project stakeholders, the design team established the visual and aesthetic look and feel of the future wayfinding and signage system, discussing considerations such as typography, materials, historic preservation, and sign function and placement.
Wayfinding and signage needs varied widely among different user groups— staff, tourists, press, lobbyists, etc—and based on the time of year-in (legislative) session, out of session and during the school year, for example. Accordingly, the design team conducted a Wayfinding Assessment of the Capitol Building, Legislative Services Building and grounds to determine weak points in the path of navigation, opportunities for new or improved wayfinding, areas of confusion in existing signage and areas that would require changeable content signage, interpretive signage or signage specific to a use and time of year. This led to a workshop with the project stakeholders to review the findings of the assessment and gather additional feedback based on their experiences as some of the buildings’ key users. From there, the team conducted an in-depth site walk to survey existing conditions. This helped determine the sign placements and types based on the surrounding context, viewing angles and need for architectural sensitivity. Since current architectural plans were unavailable, this exercise helped us determine scale in the space.
From the beginning of the project, the client team was enamored with the design direction and eager to have the benefit of enhanced navigation for users. While the novel coronavirus pandemic set in during the final installation phase, preventing many of the building’s normal users from getting to see the new system, Visitor Services and Legislative Affairs staff have shared how much of an improvement they’ve seen already, and how excited they are for the signs to be put to even greater use.
With both interior and exterior elements, custom maps and icons and a unified visual language, the new system is both attractive and functional, intuitively leading visitors from one piece of information to the next with ease. The final result is a beautifully designed, thoughtfully programmed wayfinding system that complements the space while minimizing the impact on the building and while maximizing visitors’ ease of navigation.