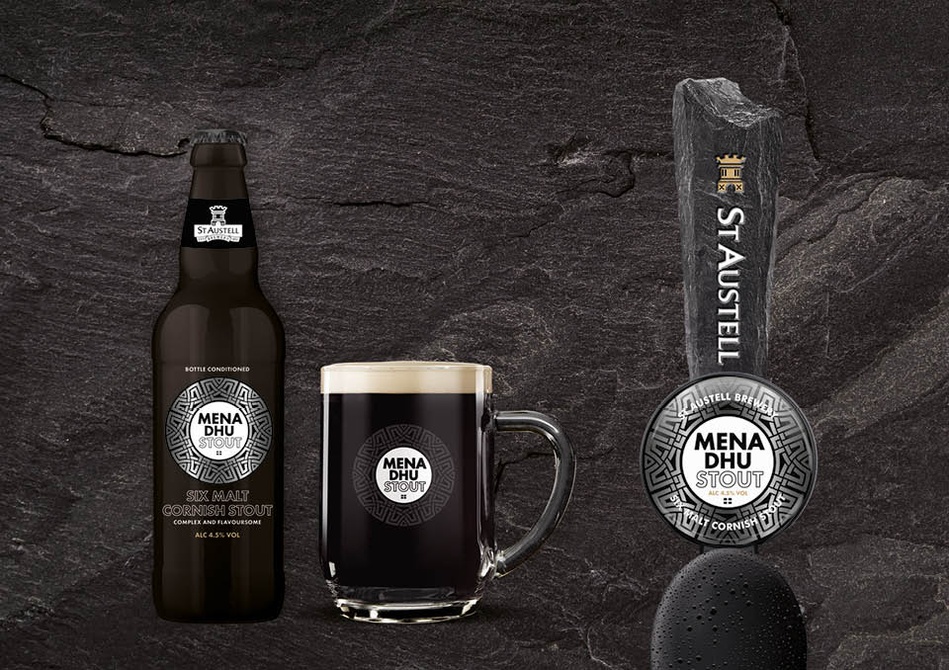 St Austell Brewery, the Cornish brewer (since 1851) wanted to launch a new beer that helped position it as a modern, contemporary brewer. The new beer had to build on its Cornish provenance and appeal to both the new generation (millennial) drinker and the traditional drinker. This Cornish stout is brewed to a 100 year old recipe and includes five malts, as well as a touch of liquorice. The project scope included: name generation; full branding and collateral including a launch invite and booklet; tap handle; lens; bar runner; drip mats; 500ml bottle labels; A4 sales presenter; glassware; launch poster.

The naming and design is inspired by Cornish provenance. Mena Dhu is brewed to an original 100 year old Cornish recipe and the name Mena Dhu also means Black Hill, a location adjacent to the former home of Walter Hicks, the founder of St Austell Brewery. The graphic is inspired by the Celtic stone carvings that are to be found in the area. This is a new generation stout that combines the best of the old with added complexity, flavour and refreshment of the new wave craft - the design appeals to both markets.

Mena DHU was launched November 5th 2015 which is international Stout Day, at the Samuel Jones Smoke & Ale House in Exeter, The first brew, which was significantly more volume than originally planned, sold out within the first few weeks and now the beer is firmly established in the St Austell portfolio – and is winning market share in key markets such as London.