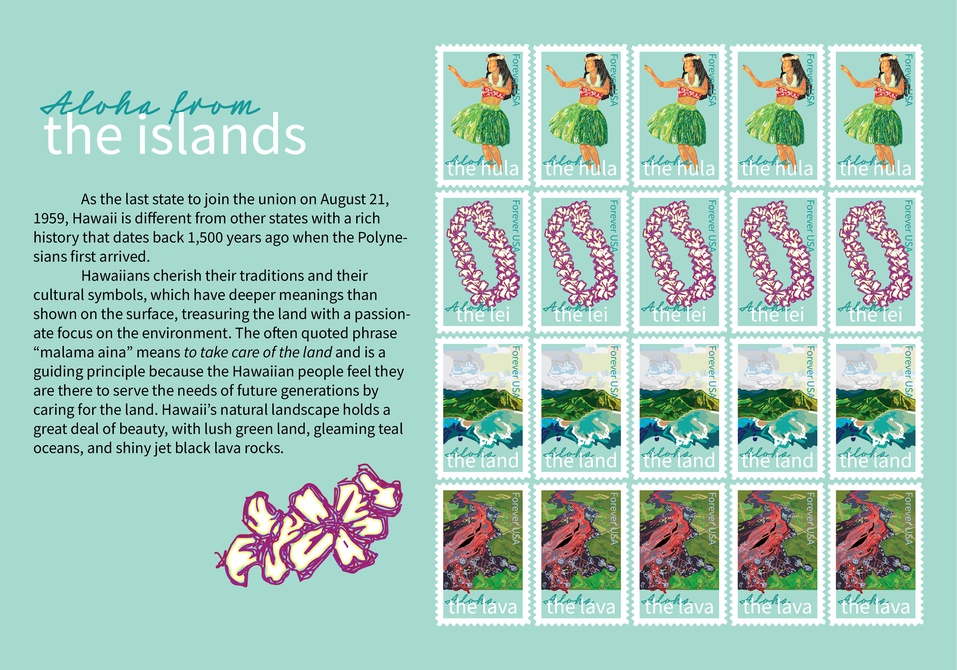 The assignment was to design a US postal service stamp series that prominently features typography and focuses on an unfamiliar culture, people, topic, or theme. As a concept for the US postal service, a requirement was that it had to be rooted in American history and culture. Also, it had to include four different stamps and it had to be presented on a single “pane” along with explainer text. The goal was to continue honing illustration skills.

I used two typefaces for this series. For titles, I used Neonoir in bold. This went with the stroke heavy feel of my illustrations. It also is a cursive typeface which I think works well for the word “Ahola.” For subtitles and body text, I used Source Sans Variable in regular. This typeface is plain and readable, so it does not distract from the illustrations. It is sans serif and rounded which matches the soft curves in the illustrations. Lastly, to create a hierarchy between the subtitles and body text, I changed the color and size of the text. I only used two typefaces to keep things simple: the titles in a more novelty typeface and the other text in a more basic typeface.

The color choices stem from my inspiration when researching Hawaii. For the background, I used a teal to represent the beautiful ocean. I used the same background color for each stamp to, again, create a cohesive series. As for the colors in the illustrations, I tried to accurately portray Hawaii. I looked at many images and made up a color scheme based on my research. I think the colors that I used work well. Additionally, I used the same typefaces and color scheme in the pane to tie everything together.

Before completing the final pane, I had to re-do the project approximately three times. With the help of my professor and her feedback, I was able to create a series that felt cohesive and she claimed: "quite lovely". Compared to my other projects, my professor agrees this is very successful and one of her all-time favorites. With that, I take the project to be a success.