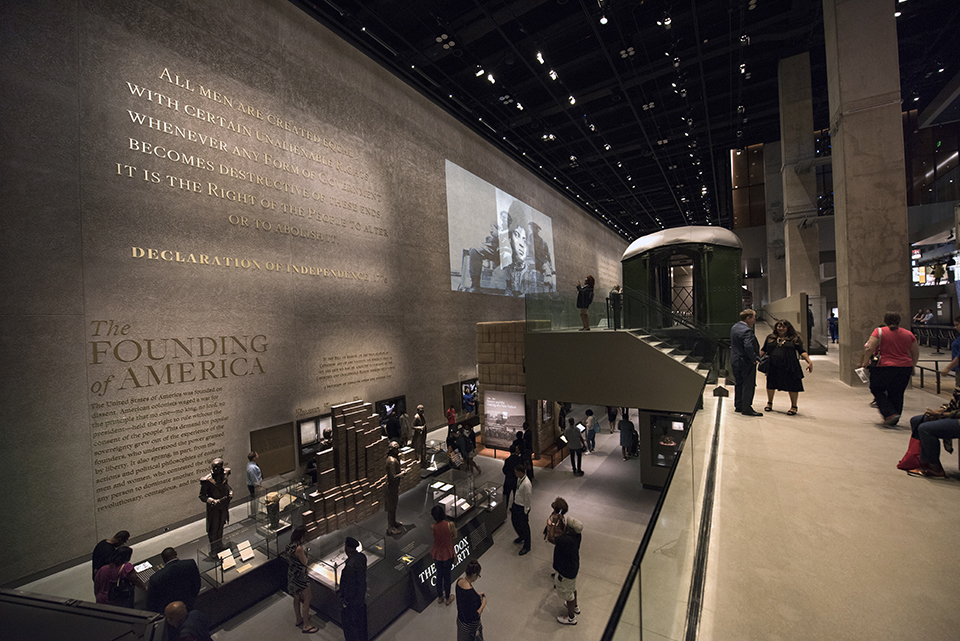 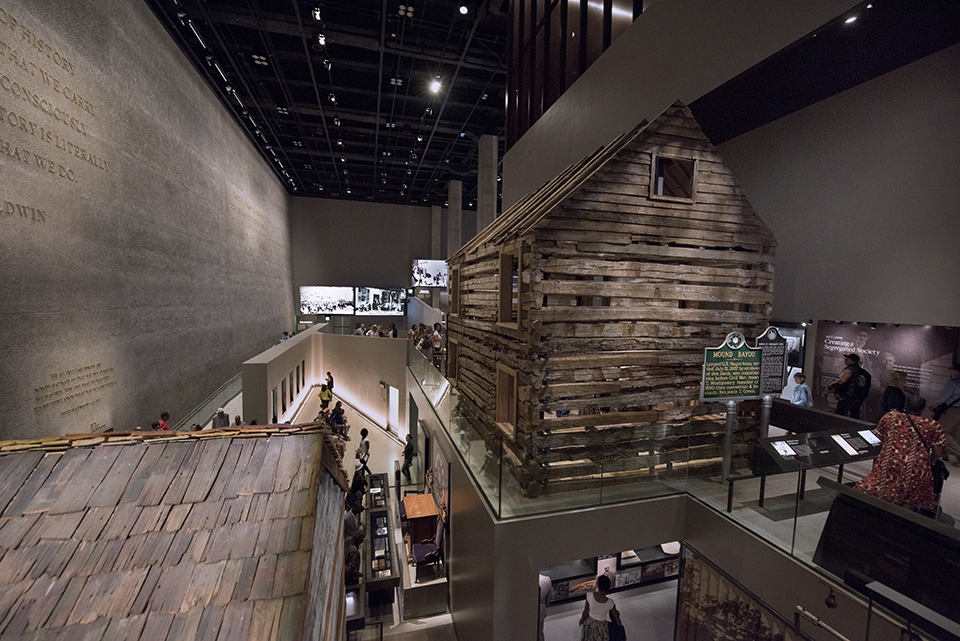 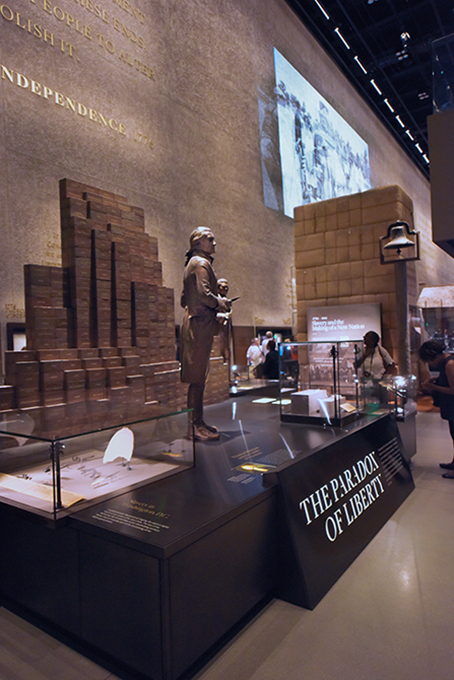 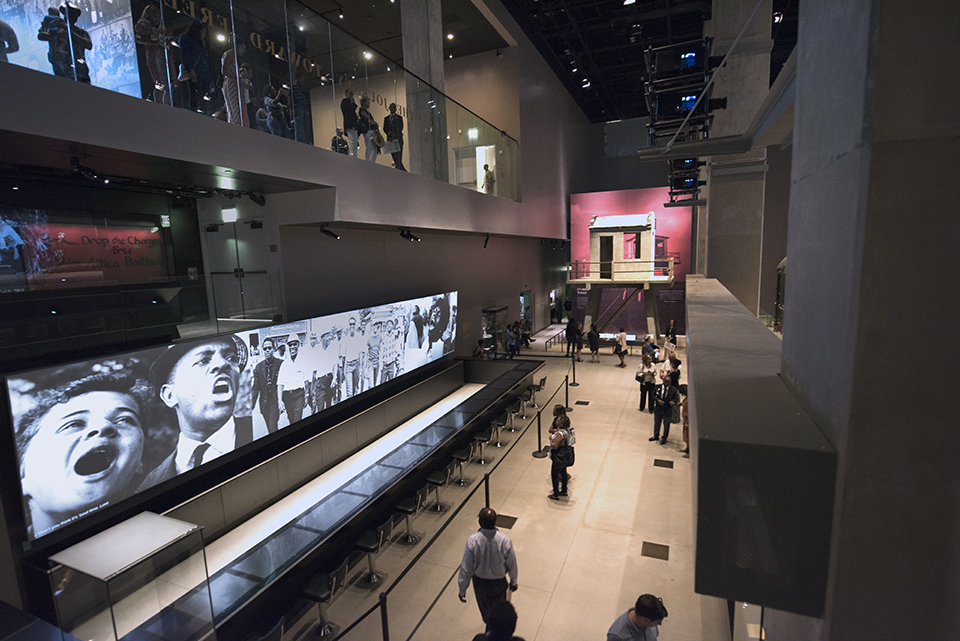 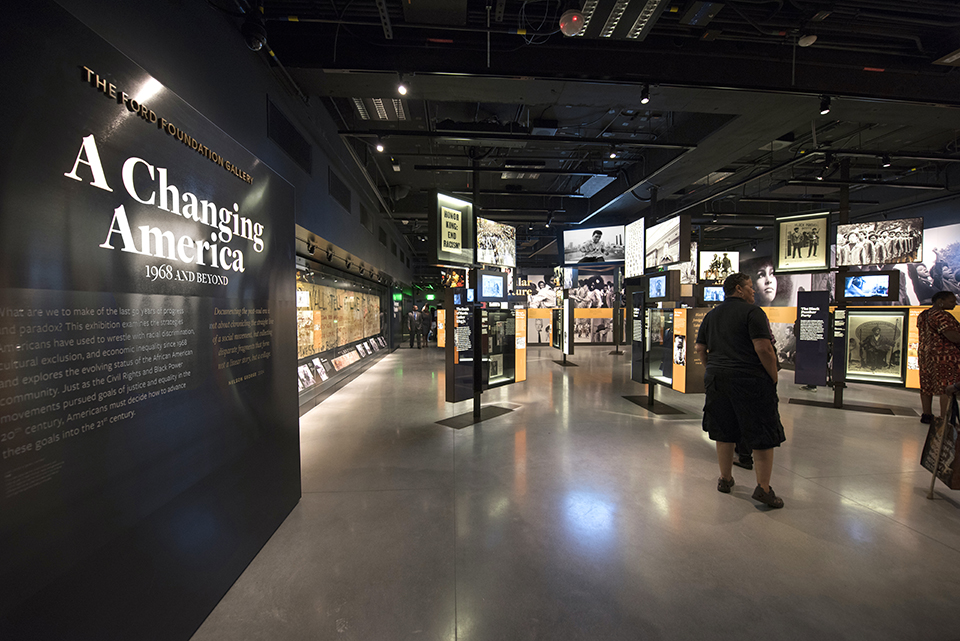 The National Museum of African American History and Culture at the Smithsonian Institution in Washington, D.C. is the only national museum devoted exclusively to the documentation of African American life, history, and culture. Efforts to establish this museum was initiated over 100 years ago by African American veterans of the Union Army, and it wasn’t until 2003 after sustained lobbying did it get established by an Act of Congress. The scope included designing 85,000 of the museum’s inaugural exhibitions, with each one of 12 galleries designed to be unique, yet make up a family of galleries that have thematic connections, design relationships and experiential balance. Visitors encounter a range of experiences and emotions brought by the presentation of difficult content and sensitive material to the most exhilarating moments of achievement and pride.

The 85,000 square feet of inaugural exhibitions for the National Museum of African American History and Culture tells a 400-year story of African American history and culture as central to America’s history. Twelve galleries take visitors on a journey that is rooted in history, embraces community, and celebrates culture.

On the concourse level, the museum’s iconic “History” galleries were conceived as tiered spaces within a large, 60-foot subterranean volume facing a monumental “Founding of America” wall, within and around which the country’s challenges, changing notions of freedom, and the paradox of liberty, play out. Three galleries: “Slavery and Freedom,” “Defending Freedom, Defining Freedom – The Era of Segregation,” and “A Changing America – Beyond 1968” present hundreds of artifacts and stories tracing the history of America from its roots in Africa and the Transatlantic Slave Trade to the establishment of colonies. The story continues through America’s wars, the country’s fight for Civil Rights, Barack Obama’s election to the presidency, and the country’s ongoing struggle for freedom, justice, and equality.

Exhibitions in two trenches tell the story of the Revolutionary War and the Civil War, and in a third trench, the display of the relics from the 1794 Portuguese slave ship, São José are located in the lowest point of the museum. Landing Theaters, Reflection Spaces and Story Booths are located along zig-zagging ramps that were designed to rise through the space toward Langston Hughes’ words “I, Too, Am America.”

On the third floor, the “Community” galleries present “Making a Way Out of No Way,” “The Power of Place,” “Military History: Double Victory” and “Sports: Leveling the Playing Field.” “Making a way out of no way” is a phrase rooted in and understood by the African American community, which expresses the creativity, resilience and optimism found in a community that for generations was given and told “no way.” This theme is the lens and pathway through the Community galleries. “The Power of Place” gallery explores the diverse experiences and stories of African American people and communities around the country, and across time. An interactive media “hub” allow visitors to explore and share stories from all over the country. The “Military History” gallery traces African American participation in America’s wars since the Revolution and up to the present day. Medal of Honor recipients have a special place of honor with an exhibit that focuses its view toward the Washington Monument. The “Sports” gallery highlights “Gamechangers” whose contributions have been made both on and off the field. Exhibits include Jack Johnson’s boxing glove, Michael Jordan’s jersey and Jackie Robinson’s bat, along with a statue of Tommie Smith’s and John Carlos’ Black Power salute at the 1968 Olympics.

The fourth floor is composed of four “Cultural” galleries: “Cultural Expressions,” “Taking the Stage,” “Musical Crossroads” and “Visual Art and the American Experience.” The Cultural Expressions gallery introduces the broad concept of African American and African diaspora culture through ways in which that culture is expressed, including style, foodways, artistry, language and movement. “Taking the Stage” gallery explores the history of African Americans in theater, film, and television to celebrate their creative achievements, demonstrate their cultural impact and illuminate their struggles for artistic freedom and equal representation. In the “Musical Crossroads” gallery, the story of African American music is told from the arrival of the first Africans to the present day The “Visual Arts” gallery is dedicated to illustrating the critical role American artists of African descent played in shaping the history of American art.

The goal of the Museum was to create a transformative experience and we feel this has been achieved by witnessing first hand reactions by visitors as they walk through and absorb the exhibitions. The overall response to the Museum has been enormous and visitation numbers have exceeded projections by a significant factor, having reached over 30,000 visitors per day and topping 1 million visitors in the little over four months since it opened. In addition to increased numbers of visitors, people are being engaged much longer (3-4 times) than the average 2 hours, for durations of 6-8 hours.