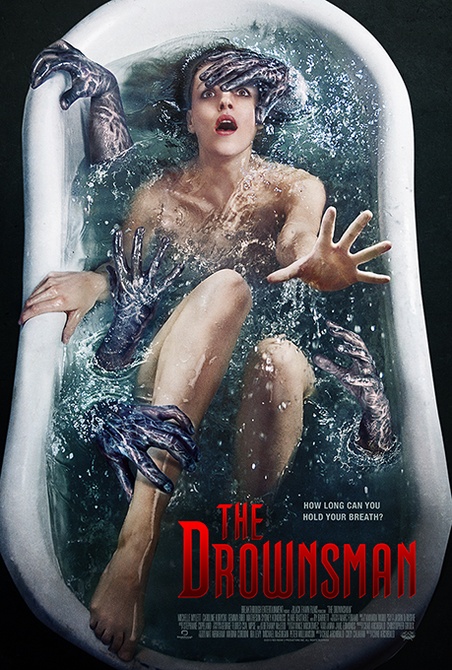 BreDOG & PONY was tasked with creating a poster for the indie horror film "The Drownsman." In the film, Michelle Mylett's character experiences an intense hydrophobia. Haunted by terrifying visions of an evil figure, her fear intensifies, and she is dragged to a dark place where she may never return.
In It was important to the client that the image represent a supernatural entity, as opposed to a human psychopath. Additionally, the client requested a retro style poster, referencing a 1980s horror aesthetic that carries through to the film itself.

A powerful visual element in this film, the antique bathtub quickly became our setting. Bathtubs are a place of relaxation, and it makes a shocking, unexpected backdrop to this violent struggle.
We sketched the scene from several different angles and sent these sketches along to the photographer. Michelle was shot alone in the tub, and so were the hands. Plates of the empty tub were also shot to aid in compositing.
Once we received the photos, we chose the overhead angle, taking full advantage of the vertical poster format. The final result, while it appears to be a single image, is actually a composite of many. Michelle's arms, legs, and head are all separate shots. Every hand was individually placed in the scene, and veins were painted on to achieve the look of dead skin. Multiple hands were used, in order to convey the idea of a supernatural attacker. Finally, we created a title treatment and color palette that harkens back to 1980s horror classics.

Our client loves this poster, and they are not alone! Most importantly, the poster has garnered a lot of attention from the press and the general public. Horror blog BloodyDisgusting.com even wrote, “Seriously, this is going to be one of the best one-sheets you see this year,” and Steve Barton at DreadCentral exclaimed, "Hollywood, take note… See this poster for The Drownsman? THIS is how you do it!”