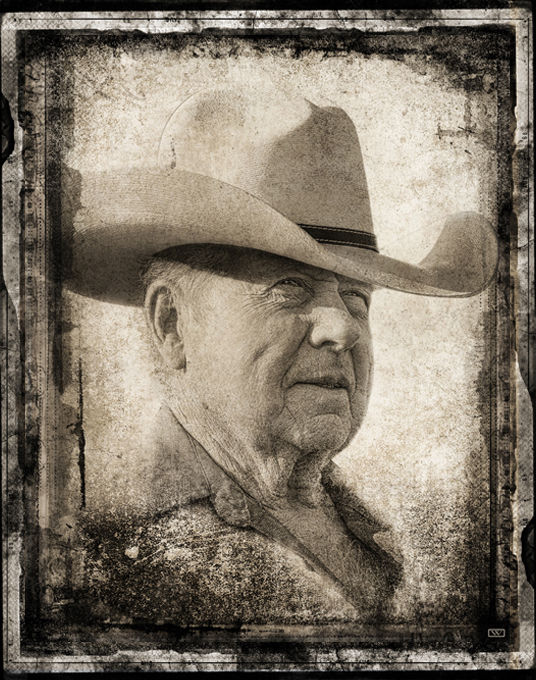 My father's 80th Birthday was coming up on September 21, 2020 and my family wanted to produce something special for him. Because he grew up a cowboy and he loves the movie "Lonesome Dove" with Robert Duvall, I decided to do his portrait as if he were one of the characters from the movie. We nicknamed him "Pretty Boy Palomino Pete." Because he admires the character "GUS" from Lonesome Dove, we bought him his own hat as a gift and the hat is named the "GUS" as well.

Because this was supposed to be a surprise for his 80th, I asked him to wear a baseball cap to make him believe that we were making a historical baseball photo of him. After I photographed him in different positions, I photographed the "GUS" hat in the same light and position as his face and added it separately. I then added textures to give the photo the feel of west Texas and a rough flavor of toughness. My father was a tough man and I wanted that to come through in the photo.

When we presented my father with his "GUS' hat, we revealed the portrait of him and he absolutely loved it. He giggled when I nicknamed him "Pretty Boy Palomino Pete." It turned out to be a tribute to my long time cowboy hero who just happened to be my father. So with that being said, "Happy 80th Birthday Pete."