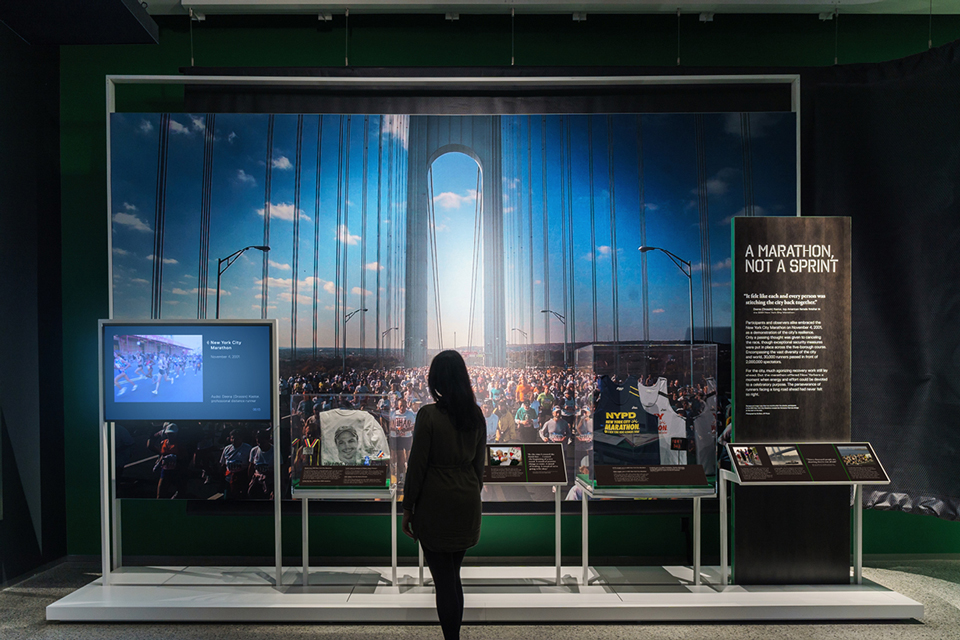 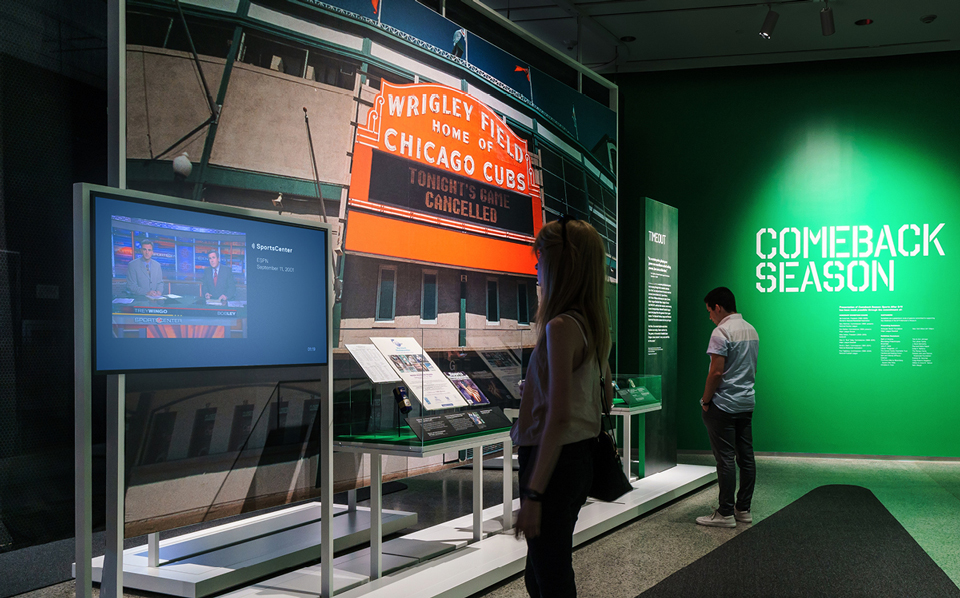 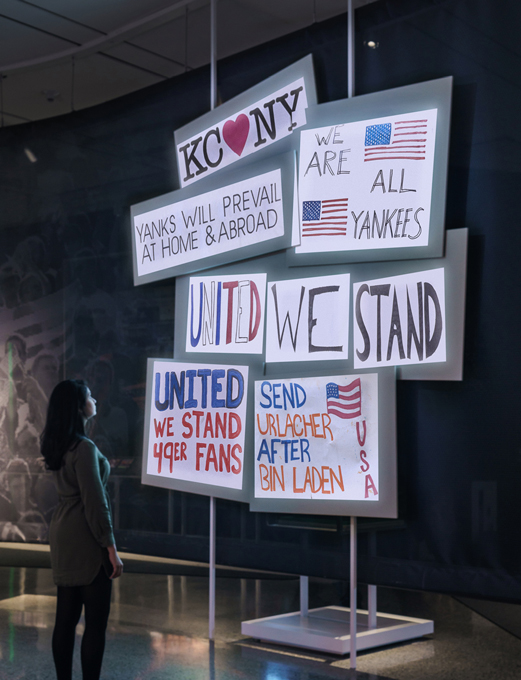 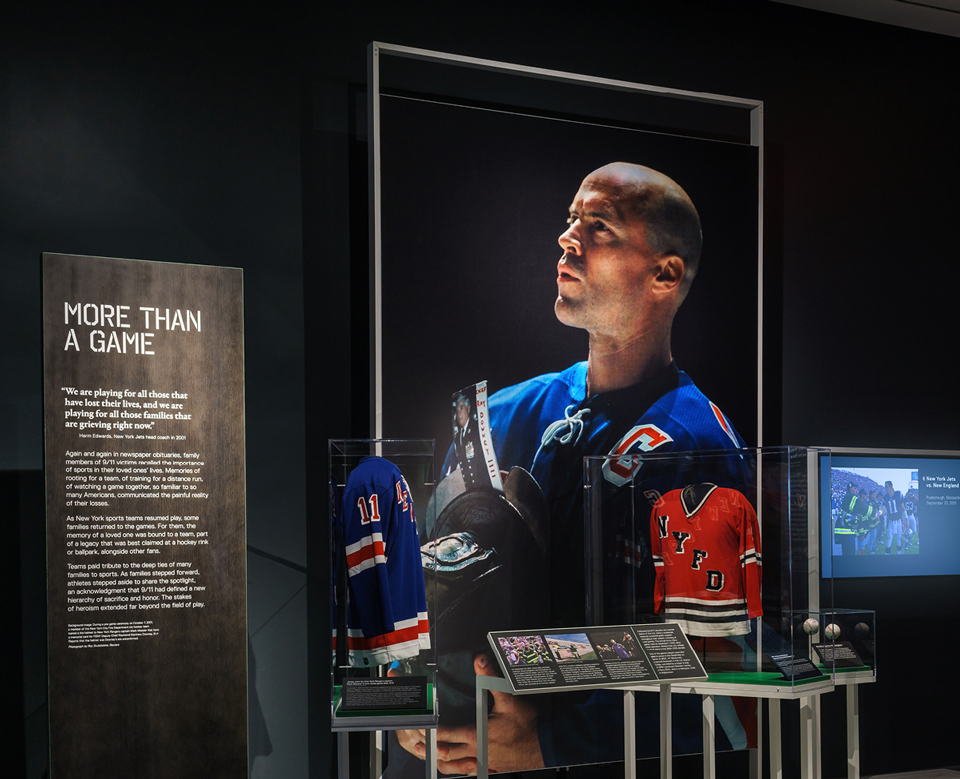 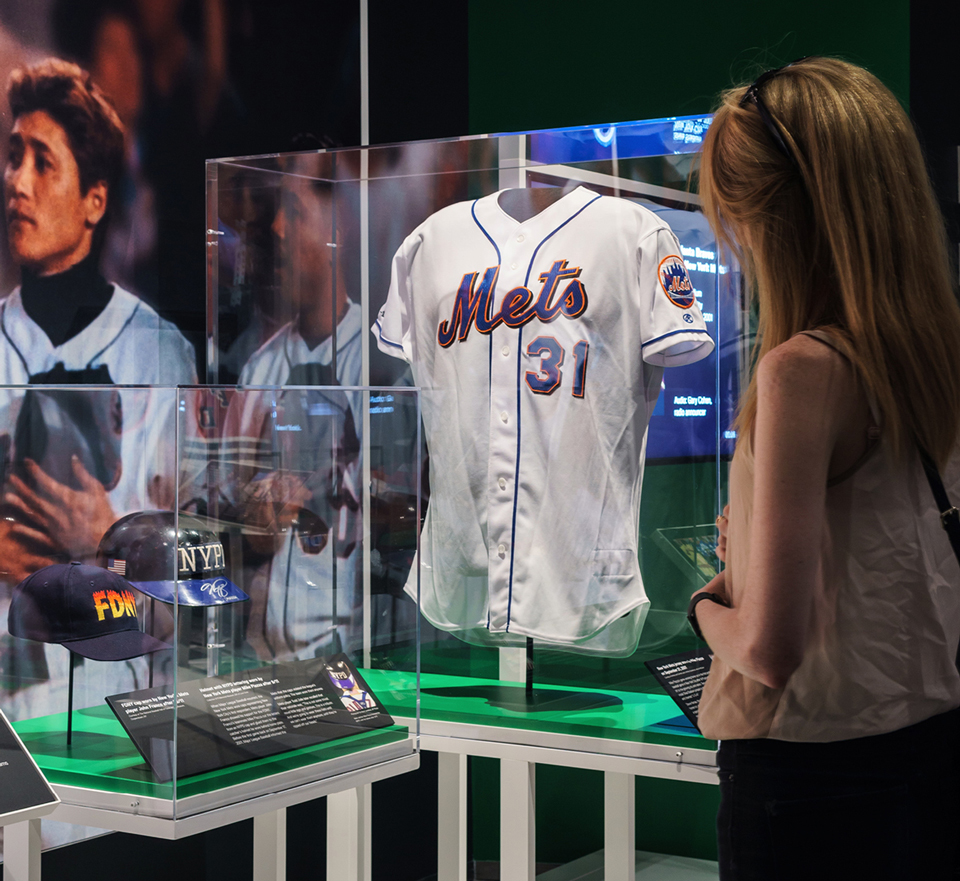 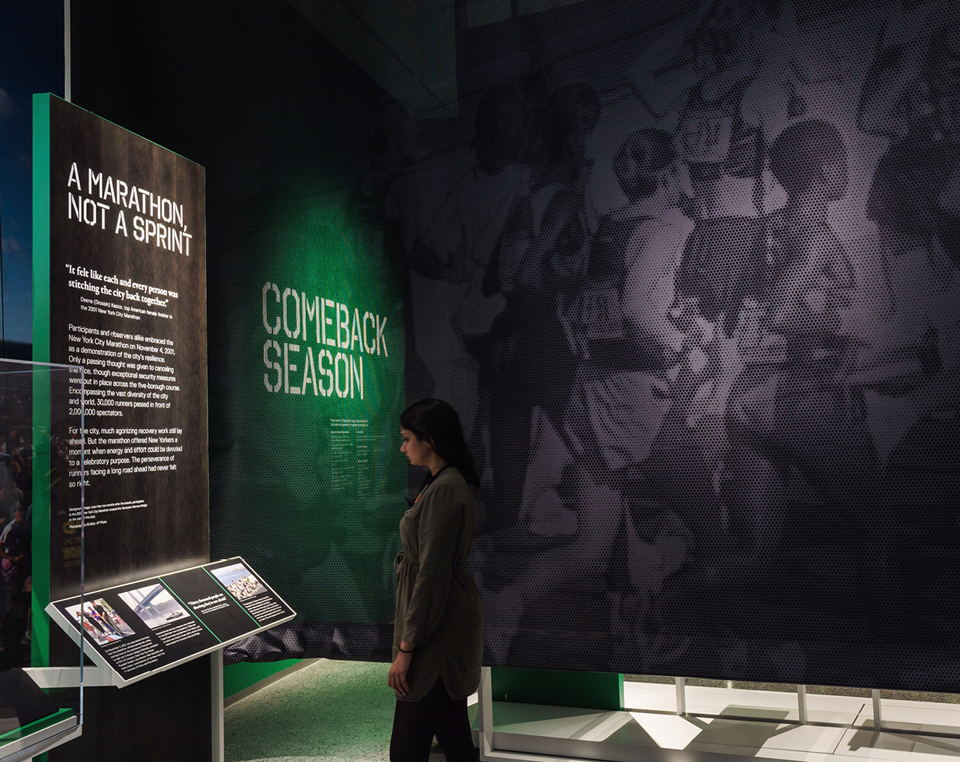 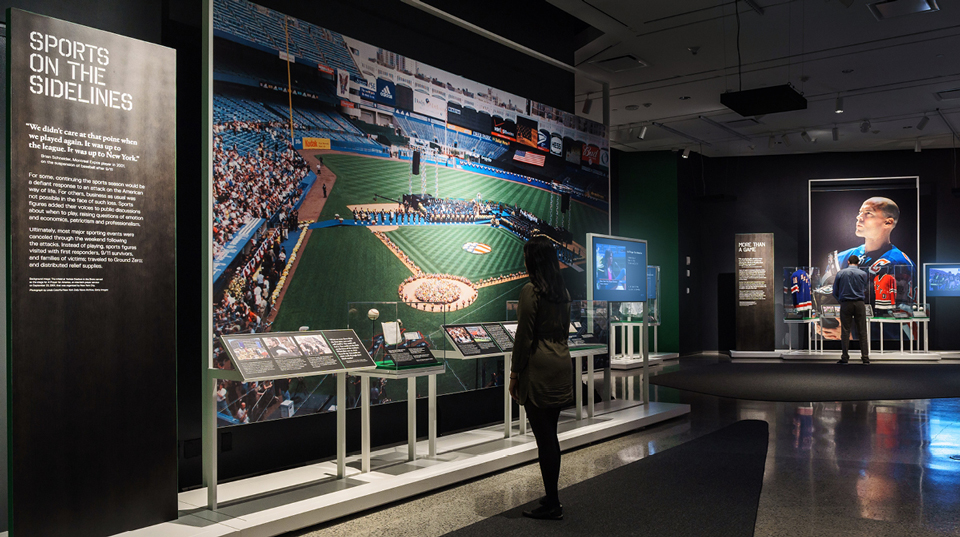 Like everything, the sports world was affected by 9/11 attacks. Games were put on hold, local stadiums and venues were used for relief efforts, athletes donated their time and money, and much more. When games resumed play, sporting events brought together the greatest number of people since the terror attacks. Not knowing what the future would hold, fans braved soft target sites to honor the fallen and in an attempt to return to normal. "Comeback Season: Sports After 9/11," is an exhibition that looks at the tragic day in a new light. C&G Partners was tasked with the exhibit design, graphic design, and sound and media production for the exhibition.

This topic was chosen to increase local membership. The Museum has tremendous visitor numbers, but the majority are foreign and domestic tourists. Locals, it seems, avoid the museum as they lived through the tragic day and do not wish to experience it again. "Comeback Season" focuses on local teams and athletes. In addition to being a subject approachable for all ages, the hope with the exhibit was to draw in greater local numbers.

The exhibit follows a mostly chronological story from the moments after the attacks on 9/11 through the following two months, ending with the New York City Marathon in early November. In between, sports paraphernalia recovered from ground zero ties the exhibit’s theme to the victims. The design strategy uses the changing emotions of the crowd after the attacks as context for the narrative. It’s an effective way to frame the story arc, using design gestures to take visitors back to those key moments in stadiums to portray the changing emotions of a whole nation. By making visitors feel as if they are actually in those crowds, they experience the profound transition from uncertainty and grief, to hope, that swept the country over the weeks and months once sports leagues resumed play and brought us together.

The show consists of nine chapters, four short stories, and a halftime show. Each chapter includes pylons of written content, supergraphic imagery to set the scene, artifact vitrines, reader rails, and a custom-made media program. Each media piece is 2-3 minutes long and provides context with archival footage. The short stories pay homage to sports stories that deal specifically with 9/11 victims and their family members, where audio is delivered through a customized directional speaker tuned to small groups of listeners.

The gallery space is divided by a translucent scrim which separates the space while maintaining an illusion of openness. Suspended from the ceiling, the scrim is made of material reminiscent of sports jersey fabric. Graphically-treated images of crowds are printed onto the scrim, using double-sided halftone printing techniques. A varsity-inspired typeface, commonly found in sports stadiums, are used in the identity and exhibition materials. The letters appear to be stenciled, similar to those that appear on stadium turf, and are reminiscent of “do not cross” emergency warnings to reflect the seriousness of the time. Green is a focal color, alluding to grass in sports stadiums as well as a sign of hope and regrowth.

The halftime show is a projection-mapped digital installation that populates a custom-made sculptural form with images of the fleeting fan-made posters of the era, fading in and fading away over time. The ephemera enhances visitor experience further conveys the emotion of the fans. These signs carried messages both personal and poignant. They also revealed an emotional evolution in fans from the immediate aftermath of the tragic day to weeks and months later. Our solution there answered the question “what do you do when these ephemera items cannot be tracked down and many were likely not preserved at all?”

The exhibition has been visited extensively by both local and international audiences, including some who didn’t expect to find themselves in the Museum. In addition to support from sporting celebrities Mark Messier and Tiki Barber, the exhibition was covered extensively press by outlets that include New York Times, CBS New York, ESPN, Sports Illustrated to name a few. In speaking with family members of victims during VIP events for the exhibit, and local visitors during regular museum hours, it’s clear that Comeback Season has brought joy to those who wouldn’t expect to find it in the Museum.