MTN DEW A Can Has No Name 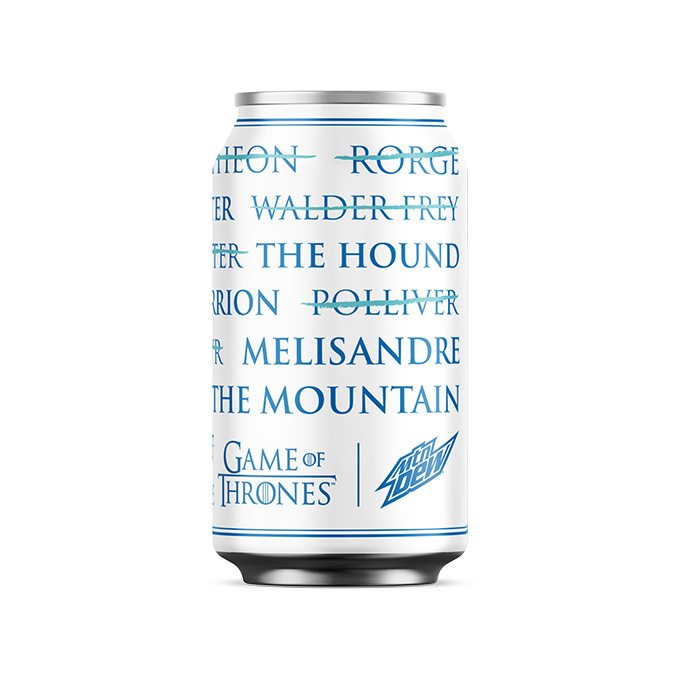 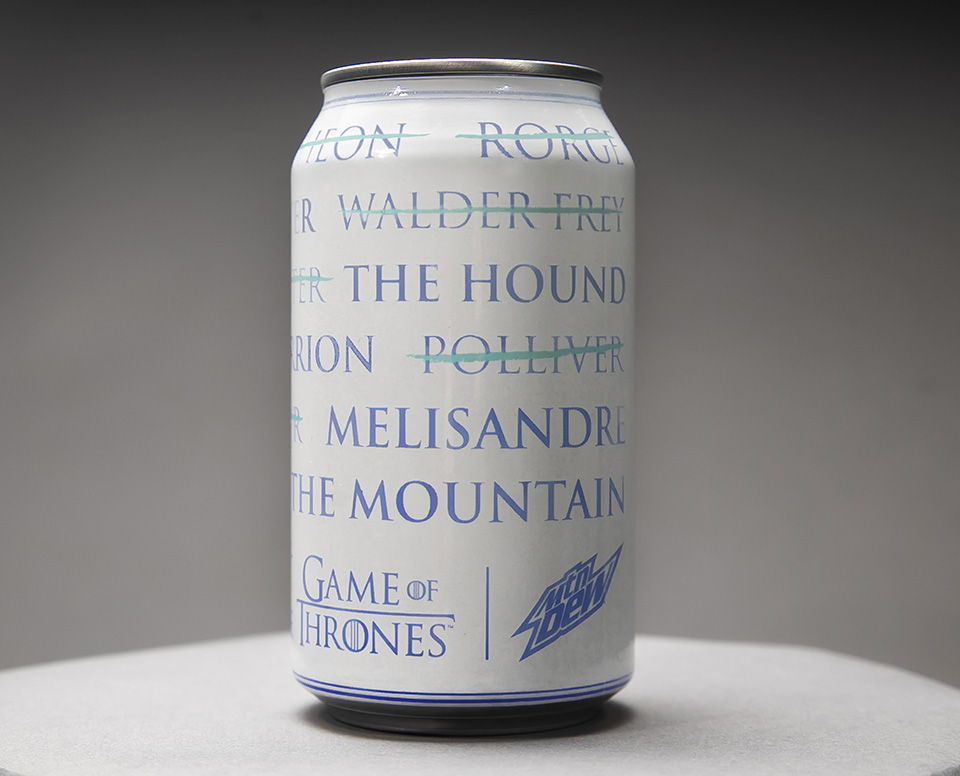 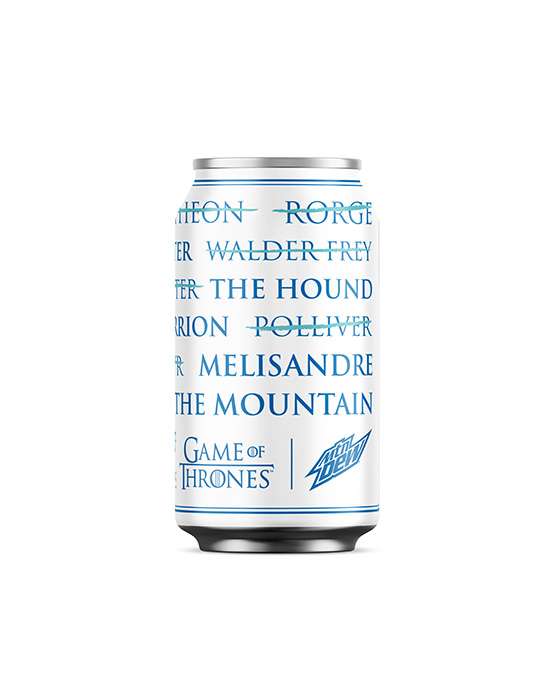 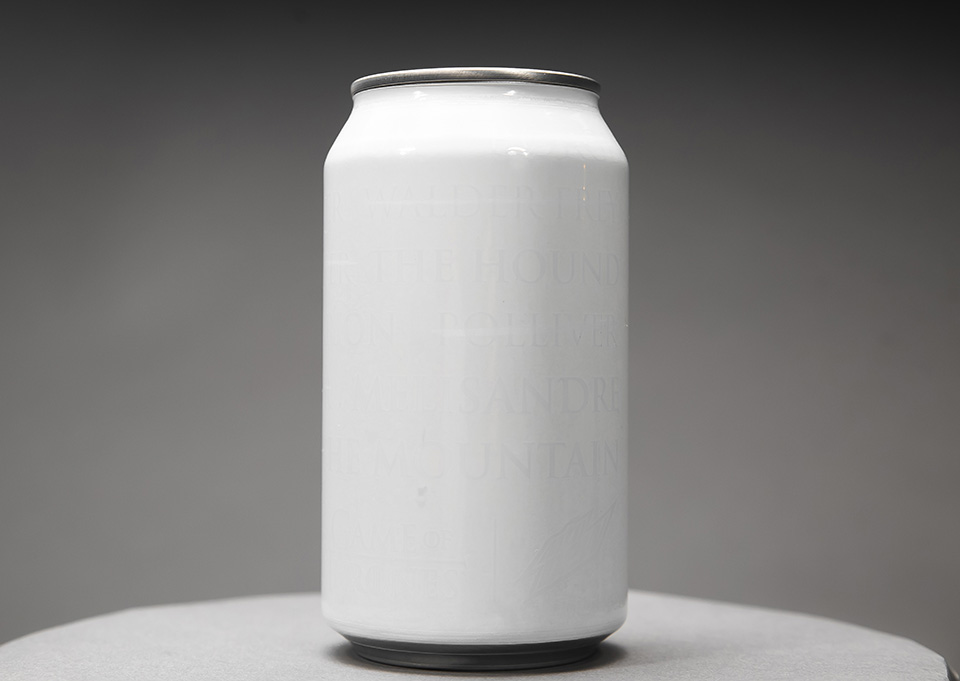 Title
MTN DEW A Can Has No Name

There is a strong cross-section of dedicated fans who love both Mtn Dew® and Game of Thrones. Before any official Mtn Dew/Game of Thrones partnership, fans were already drawing parallels between the two. In anticipation of the final season of Game of Thrones, HBO challenged both fans and brands with the question “What Would You Do for the Throne?” Mtn Dew and the PepsiCo Design team were willing to sacrifice everything: our brand, our name, and our iconic visual identity. The Mtn Dew brand equity is in its iconic logo, neon green color, and iconic shards and rails on our packaging. We decided to take the risk to sacrifice it all, and the result was a huge success. While the budget is undisclosed, PepsiCo produced 9,000 cans with some designated for influencers, some for online sweepstakes, and most through in-person vending machine brand activations in New York City and Los Angeles.

‘A Can Has No Name’ was created specifically for the Mtn Dew and Game of Thrones super fan. The inspiration for the design of ‘A Can With No Name’ came from the reinterpretation of key elements from Game of Thrones. In the show, the Faceless Men (a guild of assassins), give up their identities to become “no one” in service to the Many-Faced God. Arya Stark, a beloved character, trained with the Faceless Men as a girl with no name. In tribute to Game of Thrones, Mtn Dew gave up its iconic neon green “face” to reveal a stark white, brand less can. When warm, the cans appear nameless, but once chilled, they reveal Arya’s kill list. ‘A Can Has No Name’ pays tribute to the characters killed and reveals a reminder of her remaining targets for the final season, turning a key show element into a tangible keepsake.

We started with a blank canvas to make the most intriguing and impactful impression. This bold move created an opportunity for an epic reveal of Arya’s kill list, rendered in Game of Thrones’ iconic use of the Trajan font. The ‘A Can Has No Name’ concept was achieved with temperature-sensitive thermochromatic ink, allowing for color to have a faint residual look at room temperature, then become enhanced when refrigerated to illuminate the design. The campaign execution included the ‘brandless’ Mountain Dew can, ‘winterized’ social media assets, an online sweepstakes, and consumer activations. For the activations, fans went to a location in NYC or LA specified on social media, said the secret password (another homage to the Faceless Men) to get a coin to insert into an Iron Vending Machine. Once fans had the can in hand, it was dunked in a liquid nitrogen bath to finally reveal Arya’s kill list.

The Mtn Dew brand delivered a tailored co-branded Mtn Dew/Game of Thrones experience, adding to consumers’ love for both brands while celebrating a significant moment in pop culture. For a campaign that was developed in under two months and ran for 13 days, the results were outstanding. On Facebook, the ‘A Can Has No Name’ reveal video garnered 15.7+ MM impressions (6.4x average), and was the highest performing video of the past year (number of views at over 95% completion), with 1.2+ MM views. On Instagram, 4 of the top 10 highest engagement posts of the past year were related to the Game of Thrones campaign posts. 3 of the posts had engagement at 500+, over 2x the average. The can reveal Instagram video also accounted for 4 of the top 10 highest video performances of the year with 33,557 views (+272% increase over average video performance.)

We had an interesting design challenge in both the concept we started with, a blank can, and a relatively open brief from HBO for what graphics could be revealed with one key exception, we didn’t have the rights to show memorable characters from the show due to rights limitations. Our challenge was to connect the story of the characters without showing any of them directly. To achieve a truly memorable and bespoke keepsake for fans, we tapped into the PepsiCo Design team’s love of the show by assigning a team of super fans to work on the project from start to finish. This allowed our concepts to truly live in the Game of Thrones universe and aesthetic. In the end, the Arya’s kill list concept was the resounding winner both from PepsiCo and HBO perspectives.