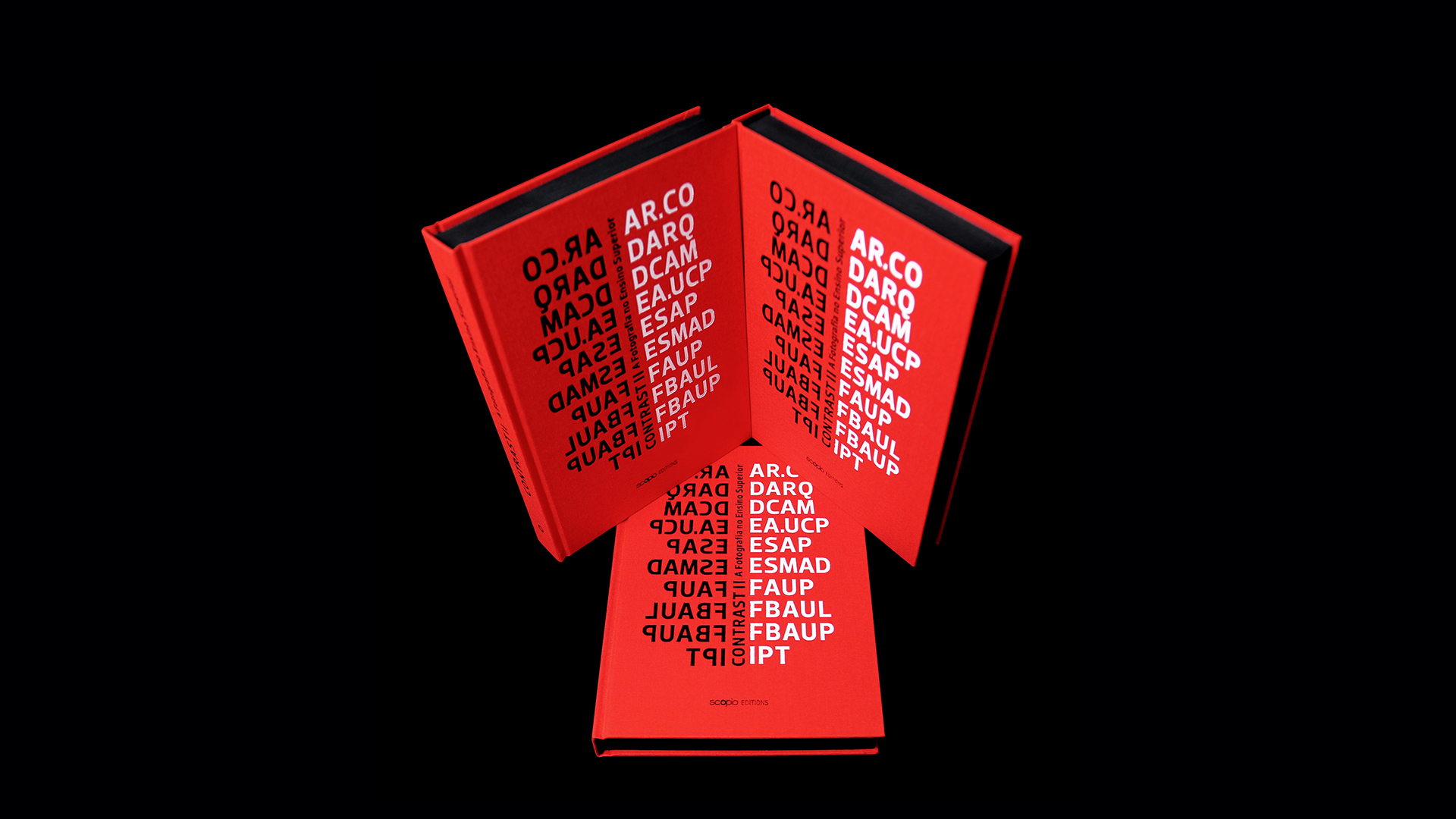 Assuming itself as an independent space, integrating several editors, teachers, artists and students it gathers a diverse set of texts on pedagogical strategies, reflection and critical analysis, about photographic projects carried out in the context of teaching and research, also integrating curricular units in which photography appears within several disciplinary areas.

The diversity of projects assembled by this initiative both in a physical book format and online platform allows a reinforced dissemination and accessibility of its outputs, better communication between all involved and a deeper understanding of the photographic world and its potential for making us perceive the real in new ways and dive into time and space travelling images.

The creation and book production of the CONTRAST project was a huge challenge in terms of editorial design due to its multidisciplinary character: diversity of photographic projects and institutions involved.

We sought an approach which would allows us to build a book whose graphic design would correspond to a space of intersectionality between the universe of Photography, Art, Image and Architecture, reflecting the contribution of various institutions that integrate photographic practice as an object of study for research and artistic practice.

It was from the multiplicity of contents concentrated in Contrast that the global design of the book was idealized and the physical structure of its pages was drawn, inviting the reader to dive into images that travel in time and space, that are sometimes hermetic in the sense of an intimate universe, sometimes open in the political sense of criticism to society, namely to its representations and more conventional cultural, sexual and life values, or else, responding through the body and the architectural landscape to a singularity uniquely belonging to the emotional subject.

The imagetic force of the publication’s cover wanted above all to convey the immense energy and creativity that this collective project possesses in its dialogue with contemporaneity. Paraphrasing Thomas Hirschom (2005) in his text I am an Artist that energy is what matters in art, this thought influenced the design of the book cover, that is, the will that from this one flowed a significant energetic intensity reflecting the internal strength of the set of its various photographic projects. A cover that would motivate the reader’s interest in getting to know the projects and texts of the various institutions in their dialogue with contemporaneity and contributing to the national and international projection of the students and professors.

The typography, the relations of the text areas, the geometric figures, the combination of images, as well as the visual narratives represented and the paragraphs, constitute a complex grid that was worked out down to the minute and contributes to a strong identity, as well as to the creation of a dynamic and rhythm that leads the readers, namely students and teachers, to absorb its contents with the necessary time to observe the graphic subtleties, something that we believe counteracts the too fast rhythms of today’s society that sometimes lead to superficiality.

The book intends to create “another time” so necessary both for the study and appreciation of the various photographic projects and for a careful reading of their texts, allowing and inviting readers to an appropriation of its pages through handwritten study notes in the margins and blank spaces created in articulation with the text area, also thinking that books are not untouchable artifacts and that the possibility of underlining and personalizing the book is of the utmost importance to mark its interest and further study.

Finally, it is important to refer that all this work of graphic design and production of the book was characterized by an exceptional collaborative endeavor capable of creating synergies and integrating the various contributions of the students and editors into a dynamic and unified layout, exploiting the specific potential of the physical book in order to offer an innovative reading and a deeper understanding of the CONTRAST project as a whole.

We are convinced that CONTRAST had a significant success for two main reasons. First, as was already explained, because of the exceptional collaborative endeavor capable of creating synergies and integrating the various contributions of the students and editors. Second, because of the inexistence of a publication with these characteristics, which allows for this editorial project to fill an important gap in the universe of photography teaching in Portugal. This has been confirmed by the positive reaction that have occurred in the many presentations of the book in schools and of its use by students and teachers. For all these reasons, we believe that Contrast will help creating synergies between several photography schools and bringing more visibility to these institutions, as well as to the projects of their finalist students, promoting them at a national and international level.