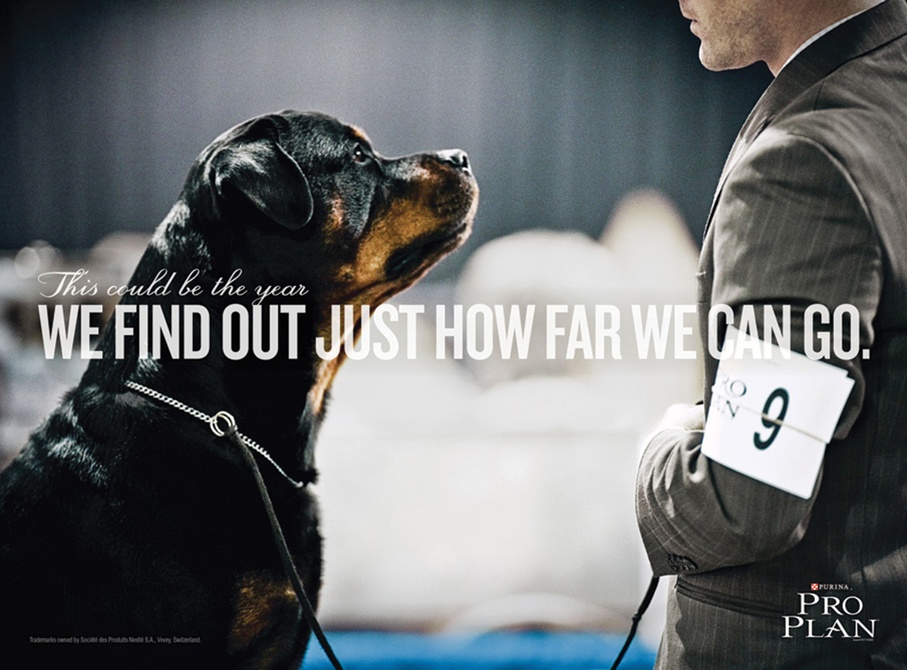 ASSIGNMENT
Our charge in creating a new brand campaign for Purina Pro Plan was to convince breeders, handlers and owners that feeding a dog the right food is a huge part of a dog’s success in the world of dog shows. The campaign was to demon- strate the important role nutrition plays in a dog’s success while also acknowledging the role the breeder plays in that success.
APPROACH
Our insight was based around the idea of defining success. We knew that whether you’re a professional or an enthusi- ast, everyone has goals they aspire to reach. The challenge was to serve up these goals without feeling elitist or catering too much to the lowest common denominator.
THE BIG IDEA
Knowing that everyone’s definition of success is different, we created a new inspirational theme line that all could per- sonalize to their own individual goals: This could be the year. Whether the goal is to win Westminster or just to enter a dog show for the first time, this campaign encourages everyone to dream of what the coming year has in store. Using a photo journalistic approach to the imagery, we set out to capture these beautiful dogs in their natural environment, the show ring. By shooting these dogs as if they were professional athletes, we were able to capture the energy, intensity and passion those involved in the world of dog shows know all too well.
RESULTS
The campaign has been an overwhelming success. In total, 17 different print ads were created, tailored to breed specific publications and their audiences. As a result, Pro Plan has continued its dominance over all other brands of food among top breeders. Currently, 89 out of the top 100 show dogs rated by the American Kennel Club are fed Purina Pro Plan. A staggering number that has helped extend the reach of the brand to breeders who aspire to see great results out of their dogs as well.