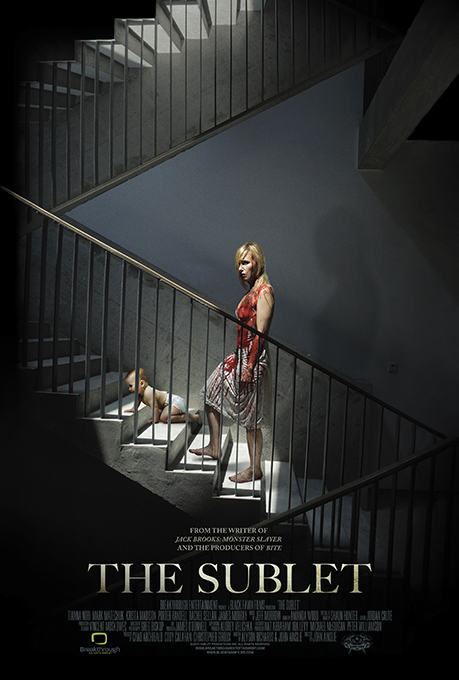 "The Sublet" is a psychological thriller about Joanna, a mother coping with her newborn baby alone in an odd sublet apartment. When she discovers her new home's violent past, Joanna's sanity begins to unravel. The viewer is left to wonder: is this just postpartum depression, or does this building want Joanna to make the ultimate sacrifice?
DOG & PONY was tasked with creating a poster that portrays a mother slowly descending into madness.

Joanna climbs up and down the staircase repeatedly in the film, and we decided it was the perfect setting for our scene. Staircases traditionally symbolize the ascent to knowledge and enlightenment--or, conversely, the descent into unconscious and all its demons. The Escher-influenced steps on the ceiling make the us question: is she climbing up or falling down? Her blood-soaked gown and eerie stare seem to imply the latter. She casts two shadows, one on the wall and one on the steps, hinting at the split in her consciousness. Meanwhile, her baby appears innocent and unharmed, leaving us to wonder... whose blood is on her dress, and what will she do to that baby?

The poster successfully piqued the interest of genre movie fans worldwide, leading up to the film premiere at the Whistler Film Festival. It continues to generate buzz and fill seats at screenings.