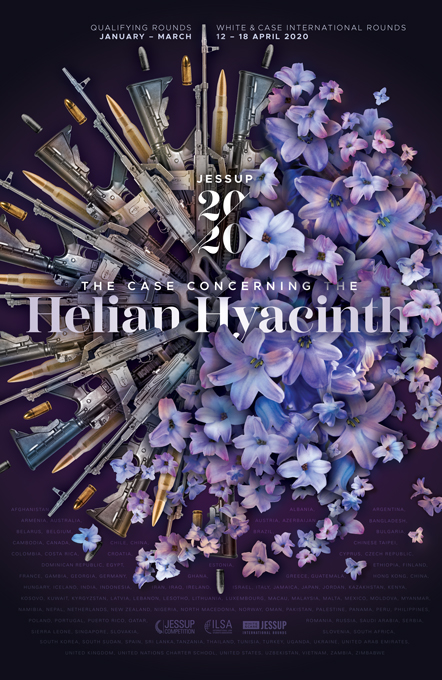 Create an exciting poster which brings this fictitious case to life for the students and judges participating in the Jessup and encourages the student to participate in this year’s competition.

The key issues of the dispute are the main elements of this design. The hyacinth flower is the point of the dispute between two countries: Adawa and Rasasa. The story is brought to life by the composition of flowers turning into guns.

Adawa and Rasasa were once friendly neighbors, mutually benefitting from the cultivation of the Helian Hyacinth. Its pollen is a prized spice whose weight-to-value ratio is comparable to saffron and a significant contributor to the countries’GDP. After a catastrophic cyclone struck the region causing death and destruction, the countries are now fighting over growing, harvesting and selling the pollen of the Helian Hyacinth.

The flowers literally turn into guns in this design. Slightly spiral composition also alludes to the cyclone which caused former allies to turn on each other. The list of over 100 countries participating in Jessup is creates the textured background of the poster.