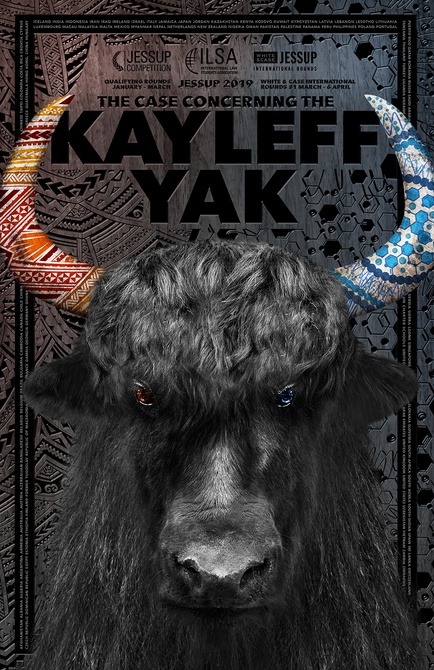 White & Case is the sponsor of the Jessup Cup—Philip C. Jessup International Law Moot Court Competition. It is the world’s largest moot court competition, with thousands of law students from around the world presenting oral and written arguments in a fictitious dispute between two countries in front of the International Court of Justice. We createed an exciting poster which brings this fictitious case to life for the students and judges participating in the Jessup and encourages the student to participate in this year’s competition.

The key issues of the dispute are highlighted in each element of this design. The story is brought to life by the portrait of the majestic Kayleff Yak. The yak is the main point of the dispute.

Aurok, the country which relies on the Yak to preserve their traditional way of living, is represented by the tribal patterns in warn earth tones painted on the left horn of the yak.

Rakkab, the developed country, harvested yaks nearly to extinction to produce life-saving medicine from the enzymes in their gallbladders. Rakkab is represented by the pattern of molecules painted in cold, bluish tones on the right horn of the yak.

The two patterns and the title of the case look “carved” in the background of the poster. The list of over 100 countries participating in Jessup is “carved” to create a border around the design.