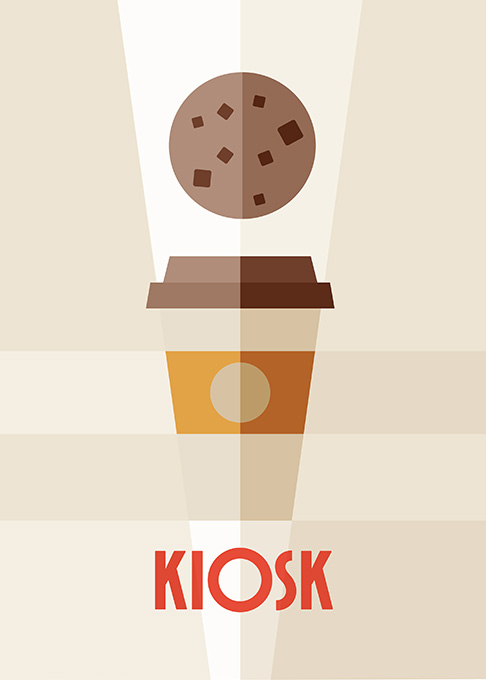 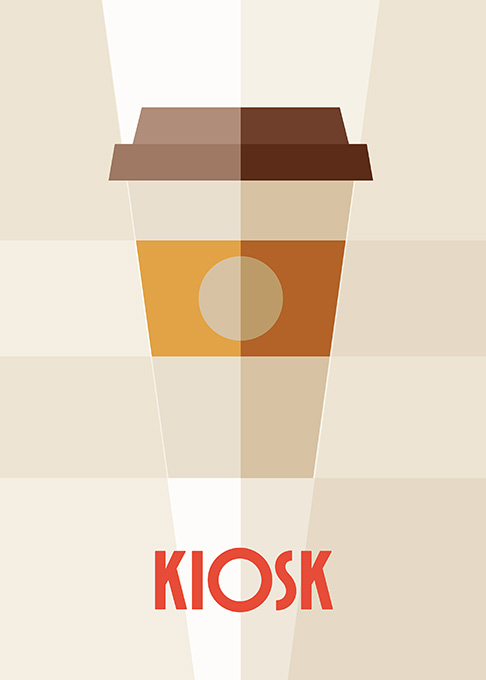 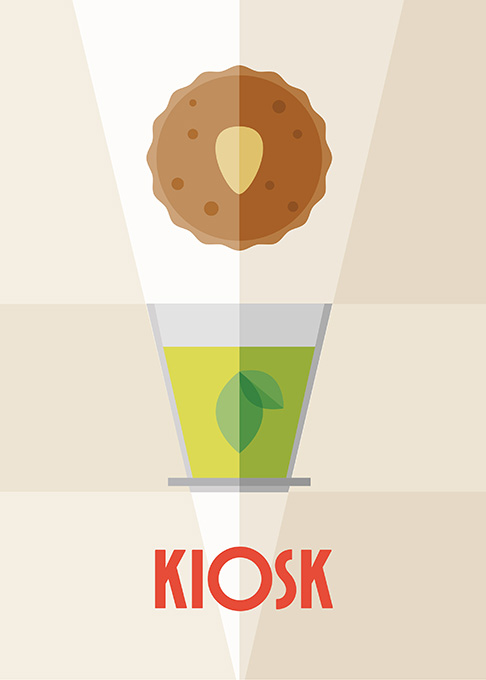 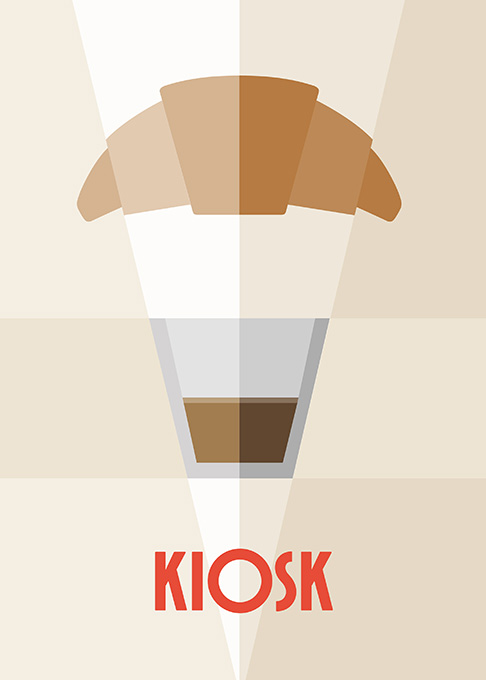 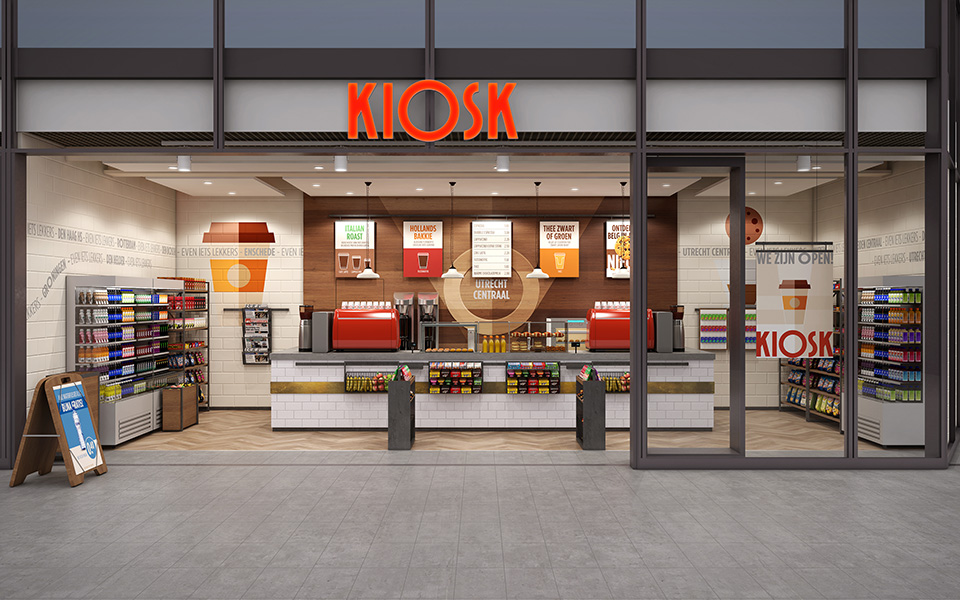 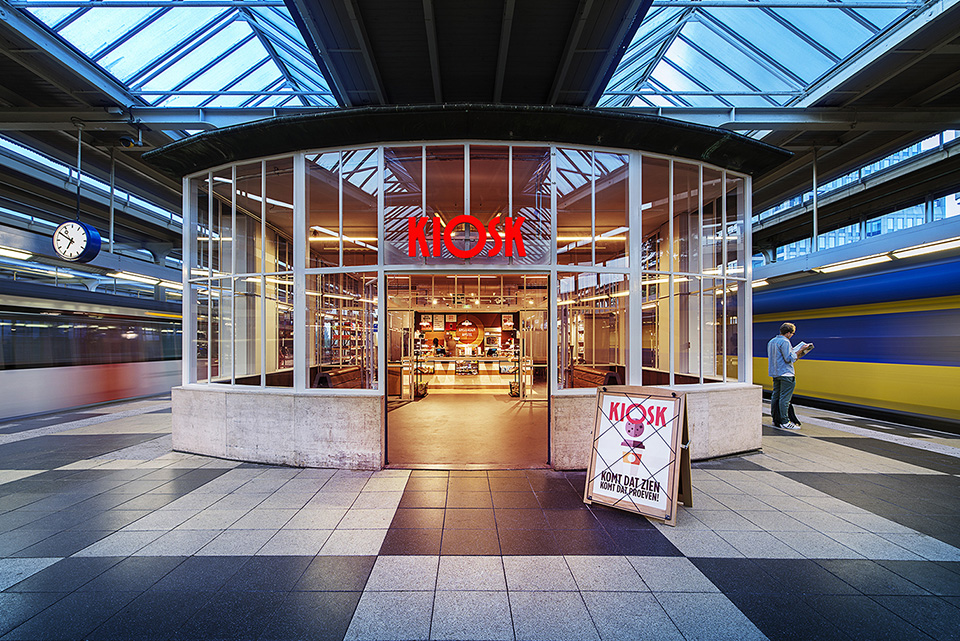 Kiosk is synonymous with Dutch rail travel and is the oldest retail format of the NS Station, part of the national rail operator in the Netherlands. For many years, it was the only place at railway stations where it was possible to buy snacks and refreshments to make the train journey ahead more amenable.
The competition in retail outlets has increased markedly over recent years, with the arrival of high-street chains, such as Starbucks, Albert Heijn and HEMA. At larger stations, particularly those that have recently undergone major face-lifts, such as Rotterdam Central and Utrecht Central, the choice available to consumers has been raised to yet higher levels. Whilst Kiosk continues to meet its commercial objectives, its pulling power in attracting new and younger customers has lagged in the face of this fiercer competition and the changing needs of consumers.

NS Stations decided to develop a new design concept for Kiosk, a new life cycle phase for the grab&go service for rail travellers in the Netherlands. The new store concept needs to be rolled out to more than 100 locations in all across all types railway stations all over the country, from main port to small commuter stations.

The aim was to produce a clear frame of reference to guide the expectations of the customer. A quick and easy way to provide a treat for the journey ahead, without the fear of missing the train. A rich history made relevant for now and to serve as a basis for future growth. A contemporary retail format, addressing the needs and expectations of today's travellers, with an unmistakably Dutch heritage.

What had become a mini convenience supermarket with a focus on maximising the product offer needed a fundamental refreshing on its core competence and relevance for customers. An inviting place, different from the ‘to go’ supermarkets like Albert Heijn To Go and also able to compete more high-end coffee specialist, such as Starbucks.

The approach for Kiosk was threefold; rearrange the product offer with a focus on coffee & tea, bake off bread & pastries and cold drinks. Quality improvement on these core ranges to address the changing customer needs. Develop an unique customer experience that is a credible environment for a better product quality performance. All whilst maintaining the assurance of the fast service you need to make sure customers are getting on the train in time and everyday affordable. Kiosk is for everyone taking the train. A better quality to compete with the specialists with the price levels to compete with the supermarket chain.

With a new concept comes a new brand identity design. The idea was to reference the new Kiosk to the traditional kiosk stand that was born in the late 19th and early 20th century, which was the ‘grand’ era of railway travel. An image most can reflect to when a train journey was the most modern way of transportation for everybody and a pivotal part of the growing modern urban society.

Kiosk has been revamped as a completely new brand. Depending on the situation in every individual railway station, the Kiosk now offers a true kiosk experience with a very contemporary offering and unique ambiance. The focal point is a delicious cup of coffee or tea along with freshly baked pastries and savouries for the train journey.
A clear offer to the consumer and a platform to adapt to changing consumer needs. A brand identity more timeless and more flexibility in store design and execution.