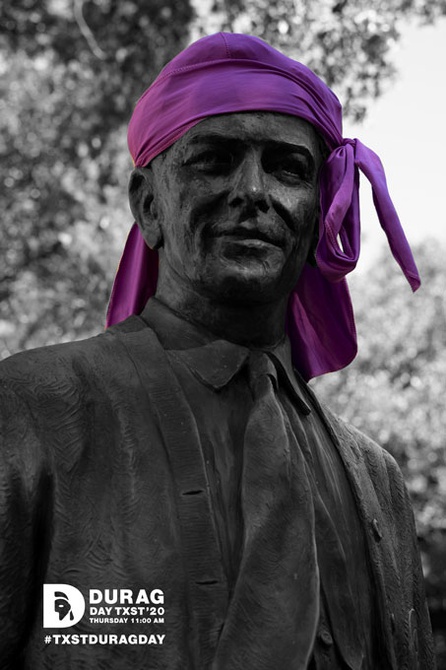 The assignment was to create a gorilla advertising campaign for Durag day 2020.

I decided to make a mark for an event that is held annually at the University of Texas at Austin,(and other schools around the United States) where all the African American students gather around the MLK statue on campus and have a social gathering. They do this while warning Durags witch are silk cloths used to protect one's hair while at night, this event is primarily used to celebrate African American culture. This event currently does not have a branding identity, so I created one, to represent this it. In doing so my professors and I decided that the mark could be expanded into a gorilla advertising campaign. I created a letterform logo for it, and then tied a durag on to the main statue on campus and placed a "call to action" on the statue as well. This statue was in the middle of campus so there would be. a lot of interaction with it.

Once the final advertisement was done there was a tone of interaction with the the statue, form local bystanders to new students who plan on attending Texas State in the future. Along with this, people started to post it on their various social media accounts, witch created even more of an awareness for the event.