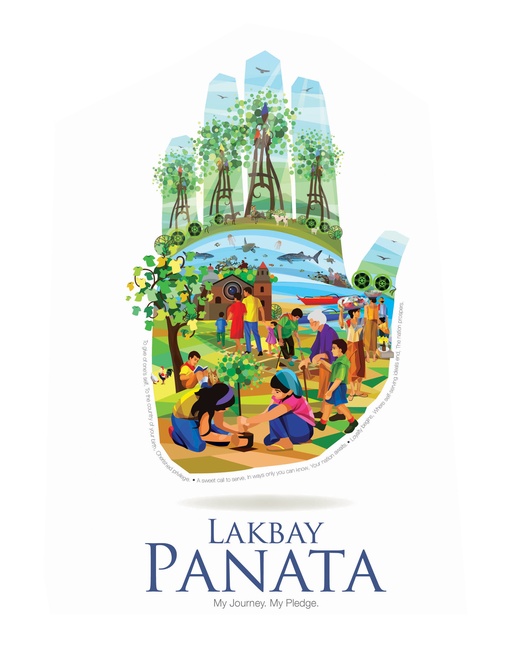 The Vision Petron National Student Art Competition is a 15 year old art contest specifically targeted for the Filipino youth, ages 16-28, and enrolled in a regular course in any Philippine university or college nationwide. Every year, the company's creative partner/agency - Studio 5 Designs, Inc. - conceptualizes a theme that revolves around Philippine culture, values, art, skills and other topics that will help the youth appreciate and be proud to be Filipino. This year's theme was a COMMITMENT or PLEDGE to be of service to family, school, community, city and nation. The theme should be present in entries for four categories - painting, photography, print-making and film-making.

To strongly convey the message of "pledging" or "committing," the designer took an open palm, positioned it an upright pledging stance, and put it on center stage. Within it, he composed a graphic essay of the various ways a young person can commit to: love for family, respect for parents and the elderly, love of God, pursuit of an education, caring for the environment, values such as cleanliness, industriousness, and other meaningful suggestions. To show the contest categories, paint brushes were made into trees, a church window became a camera lens, reels of film were stones or bushes, and a strip of film, the street. This illustration was used on all collaterals of the contest, primary of which was the Call for Entries poster. Schools all over the Philippines received the poster two months before the final deadline. To further strengthen the message, three short poems called 5-7-5s (a poetry form using the number of syllables allowed for each line) surrounded the hand. The "hand"illustration was used for various collaterals of the contest.

The Hand poster encouraged a total of 2,828 qualified entries, the biggest number in its 14 year history, from all 16 regions of the country. This was a 26 percent increase from last year's contest entries. The top six winners were featured in the company's wall calendar which is its official gift for 650,000 customers of its fuel products.