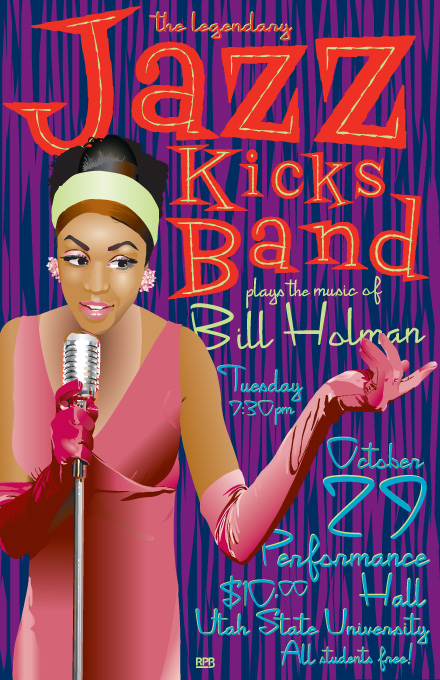 My assignment was to design a poster for a concert of the Jazz Kicks Band with the band playing compositions by the innovative composer, band leader, songwriter, conductor, arranger and saxophonist, Bill Holman.

Bill Holman's music might be referred to as the "Soundtrack of Mid-Century Modern." As a youth he was heavily influenced by both Duke Ellington and Count Basie. When he started performing in 1950 with Charlie Barnet's band, Mr. Holman's career commenced its meteoric rise. He was part of both the West Coast Jazz and Pop scene and like his East Coast music industry contemporary, Sam Phillips, he believed there was no "race barrier" when it came to music and the musicians who played it. Consequently, Mr. Holman worked with many of the important artists the period like Sarah Vaughn, Mel Torme, Stan Kenton, Ella Fitzgerald, the Fifth Dimension, Anita O'Day, Pearl Bailey, Bobby Darin, J.J. Johnson, Natalie Cole, Woody Herman, Buddy Rich, to name but a few.

As a tribute to Mr. Holman's colorblind approach to working for six decades in the music industry, I chose a Mid-Century theme; a "Sarah Vaughnesque" singer forefront, with period colors, patterns and fonts, that might be able to quickly convey to the casual passerby, the depth of the music of the upcoming performance.

The bandleader, Larry Smith, in notes on the music before the concert, referred to Mr. Holman's music being "challenging"– and possibly in rehearsal it was for the band, but the audience couldn't have known it. The band's performance at the concert was as accessible and honey smooth as Ms. Vaughn's voice and as inspiring as Bill Holman's once-in-a-century talent. The attendance at a "Jazz" concert on a cold Tuesday evening was gratifying.