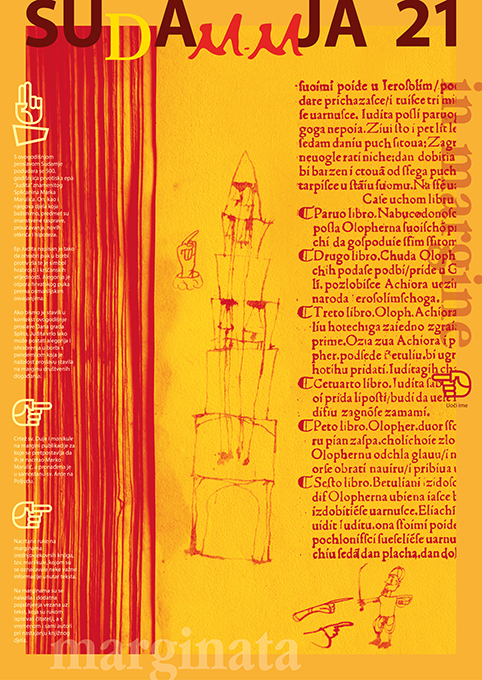 Client
The government of the city of Split

Client
The government of the city of Split

The task was to mark a religious and secular traditional ceremony, Sudamja - the Day of the city of Split and the patron saint of St. Duje (eng. Domnius) with an annual poster.
I decided to communicate the cancellation of various events and the problems of a culture that has been put on the margins of social life due to the pandemic. I used a great simultaneous moment, which is the five hundredth anniversary (Roman „D“) of the first edition of the epic "Judith" by the Renaissance writer and the "father of Croatian literature" Marko Marulic (1501.). Epic "Judith" is one of the most important Croatian literary works of all time. It was written to comfort and encourage the people in frequent medieval wars.

The poster plays with the Latin notion of “margin”, as a leitmotif, in a dynamic symbolic alternating game between the central and the marginal. The use of drawing of the city bell tower of St. Domnius by Marko Marulic on one of the margins of a medieval publication points to the consequent marginality of events but defiantly positioning itself together with the book's margin in the center of the poster. The epic "Judith" is moved to the margins (lat. “in margine”) of the poster because it is marginal in relation to the celebration of Sudamja. The new composition is bordered (lat. “marginata”) by a frame - a margin, and St. Domnius and the epic "Judith" thus together become the new central, significant.
By the same method of the inherited book system, but in a modern style, on a new margin, the idea of the poster is explained, and the written and drawn typographic heritage is pointed out.
Yellow and red are the traditional colors of the festival "Sudamja". On the poster, the original initials MM are included in the name of the celebration "Sudamja" and the Roman mark for the number 500.

The epic "Judith" and the typographic term "margin" indirectly marked the pandemic time of the celebration. The poster is educational, points to the typographic heritage, and thus contributes to culture and education. The „manicule“ is a typographic mark with the appearance of a hand with its index finger extending in a pointing gesture to draw the reader's attention to important text. Connecting the writer's medieval marginals and "manicules" with the modern, it points to the tradition and continuity of the celebration, which is not interrupted by at least with this poster.
The epic "Judith" can also be seen as an allegory at the pandemic where viruses are today's enemy with whom the battle is being fought.