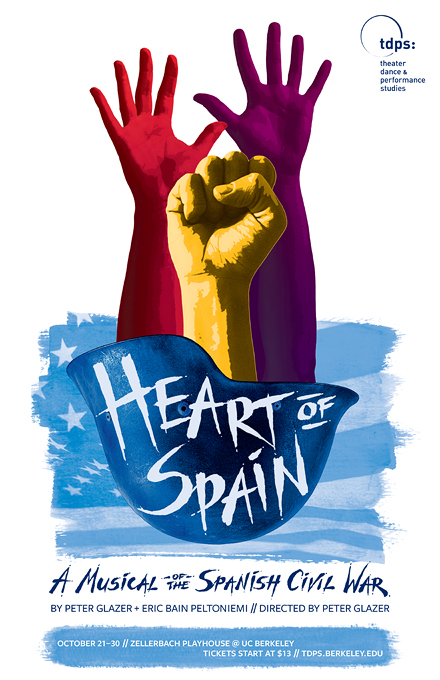 The brief was to create a poster advertising a production of "Heart of Spain — A Musical of the Spanish Civil War," presented during the battle's 80th anniversary. The musical follows passionate US volunteers from diverse ethnic and economic backgrounds who selflessly helped Spaniards defend their Republic against fascist General Francisco Franco.

To capture the unbridled spirit of volunteerism, I decided upon a central image of raised hands in the bold colors of the flag of the Spanish Republic. The varied colors further serve to reflect the diversity of the volunteers. The central hand is in a fist, recognized during the Spanish Civil War as an anti-Fascist salute, as well as a show of solidarity. The hands rise from a Spanish Republican helmet.

An American flag serves as a backdrop, rendered in blue as though impacted by aerial perspective; this emphasizes the distance the American volunteers traveled to lend a hand. Brushstroke edges evoke a feeling of energy and action. This aesthetic is carried through to the play's title, which was hand-painted.

"Heart of Spain — A Musical of the Spanish Civil War" enjoyed a well-attended run. Perhaps more gratifying, however, was the director/playwright's positive reaction to the artwork — I wanted very much to faithfully capture the spirit of his script in my visuals. The artwork was ultimately dispersed on the university's campus, on Facebook, and beyond, providing recognizable and consistent imagery with which to identify the production.