Recognition of Specificity of Representation 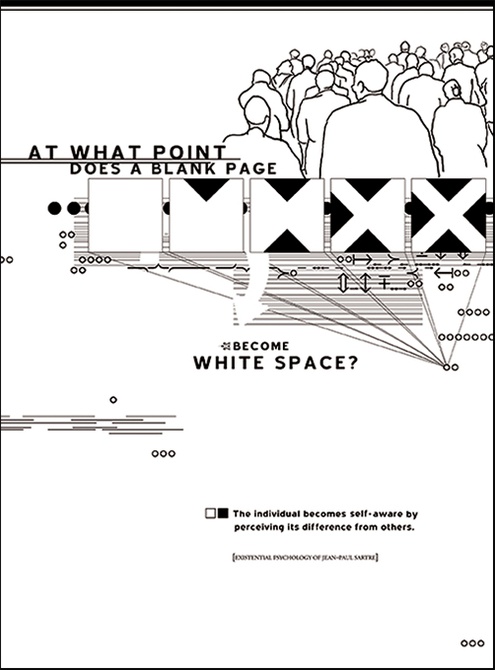 Title
Recognition of Specificity of Representation

On the surface this appears to be a poster simply about basic design principles of white space or negative space. But I hope the images of the crowd of people and the text about existential psychology suggests that the poster may be interpreted as something more.

In Existential Psychology it is suggested that the self becomes aware of the self through contrast to the other. An example of this phenomena is exhibited in the movie, Night of the Living Dead directed by George Romero. The scholar, Richard Dyer, suggests Romero took advantage of this idea of becoming self-aware via contrast with casting decisions that effectively stressed the hyper-whiteness of the brain-eating zombies. When individuals are asked to "read" an image of individuals that "look" like themselves, race is often "invisible," but if an image of the other is included in contrast, race seems to become more quickly visually read by those that recognize the contrast between themselves and the other. That was the idea behind this poster. I use white space on a page as the metaphor for this discussion.

How many “other” shapes do I need to put on the peripheral before one recognizes the big white shape that was there all along? There are white representations (white faces) in so much of the graphic design and mass communication in the world, we as graphic designers need to recognize the racial specificity of these images and work to avoid the use of exclusive imagery.