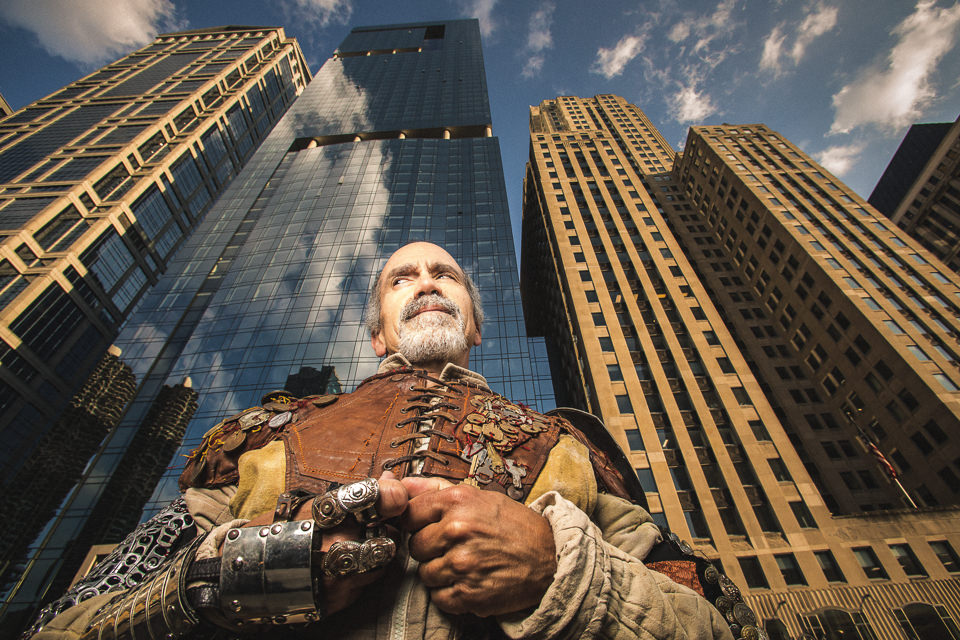 Create a poster image for "Quixote: On the Conquest of Self"

The image had to show Quixote in a modern environment. Chad-- the Marketing Director at Writers Theater-- gave me a happily huge latitude for choosing location. Collaborating on a few different ideas-- we chose downtown Chicago as the final spot.

Downtown provided opportunity for the use of height-- and lots of fun with contrasting scale.

Setting Henry Godinez against skyscrapers-- and showing him as almost-just-as-tall-- tells the story of Quixote in a quick and dramatic visual shorthand-- here's a character who naively sees himself as a 20 story hero-- and takes on the world with a sweet and innocent hubris.

My promotional theater photography is based in portraiture. I've been a performer most of my life-- so as a photographer I like to create unexpected moments through play and experimentation.

Most often, I only have actors for a short amount of time— usually a half an hour-- so I have to move quickly to create useful and compelling images that capture the essence of the show. I give a starting action, and push us all fast and loud to make as many surprises as possible. The less thinking-- the better.

Having no time has taught me to quickly eliminate what's unnecessary-- and to work quickly to get to the strongest moment. Too much time to shoot— leaves too much opportunity to think, to doubt. Just as in performance, the less time I have, the faster my terror (of failing) will make me see what's really compelling.

The costume was only available for a few hours-- and was shipped from Mexico next-day air.

We wanted to show Quixote among recognizable Chicago landmarks-- like the Corn Cob buildings in the reflection of the windows behind the actor.

I told Chad-- the Marketing Director-- that I wanted to keep things loose-- and try as many locations in one hour as we could. These buildings fit what we were looking for perfectly-- as they also matched the costume in color and texture.

To get the big, broad, and visually arresting-- I went with a 17mm lens and got as close as I could focus-- aiming to highlight the beautiful hand-work of the costume by Sanja Manakoski.

Henry Godinez, the actor in the 50 pound leather and bottle-cap suit-- was a consummate professional. The weather cooperated with us that day (THANK THE GODS)-- save for the 95 degree Chicago heat. We had a team of 7 people on the shoot-- and Henry was the only one that kept running with me across street to a new amazing spot right up to the end.

Writers used more images than planned-- and expanded their photo campaign, inspired by what we'd created during the shoot.

Also-- I've worked with them on two new predproduction shoots for the 2018 Season.