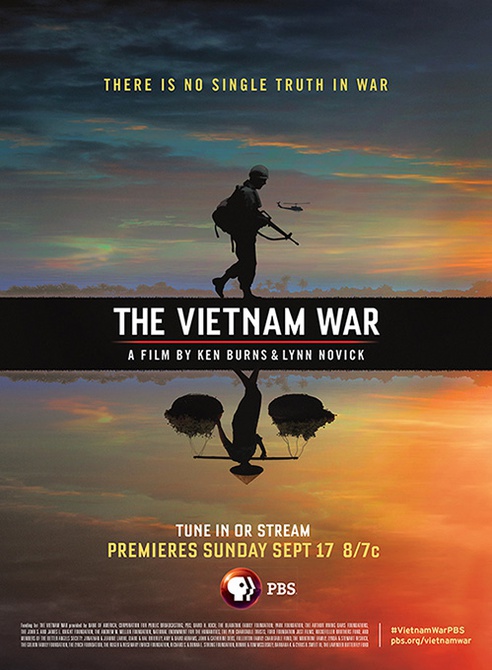 Key art for The Vietnam War, a landmark documentary by filmmakers Ken Burns and Lynn Novick. PBS’s goal was to engage a broad multi-platform audience on a topic both well-known and also uncomfortable and unresolved. The objective of the media campaign was to ignite interest for this 10-part, 18-hour film by achieving two goals: drive viewership to at least double the PBS primetime average, and start a conversation around this difficult, yet still relevant topic.

Research showed that the diversity of perspectives shown in the film could help our audience overcome their hesitation with this troubled history. That insight reverberated across the entire creative campaign and yielded our powerful tag line: “There is no single truth in war.” Termed ”Reflections,” the key art - with the striking, silhouetted images of a U.S. soldier and the reflection in the water of a Vietnamese farmer - clearly and effectively communicated the idea that there is more than one side to the story, and things are not what they seem at first glance.

PBS, Ken Burns and Lynn Novick were impressed with our elegant expression of this complex idea. The key art thus became the signature image of the film, and was leveraged across all platforms. PBS’s overarching campaign activity from paid, owned and social media to the filmmakers’ media appearances and PBS station events led to strong results. For viewership, the film tripled PBS’s primetime average and 39 million television viewers tuned to The Vietnam War. Moreover, the film reached 13% of all U.S. adults and 1-in-5 Baby Boomers. On digital platforms, it streamed 10 million times (9/17 – 12/31). A Vietnamese-subtitled version generated 1.9 million streams in Vietnam.