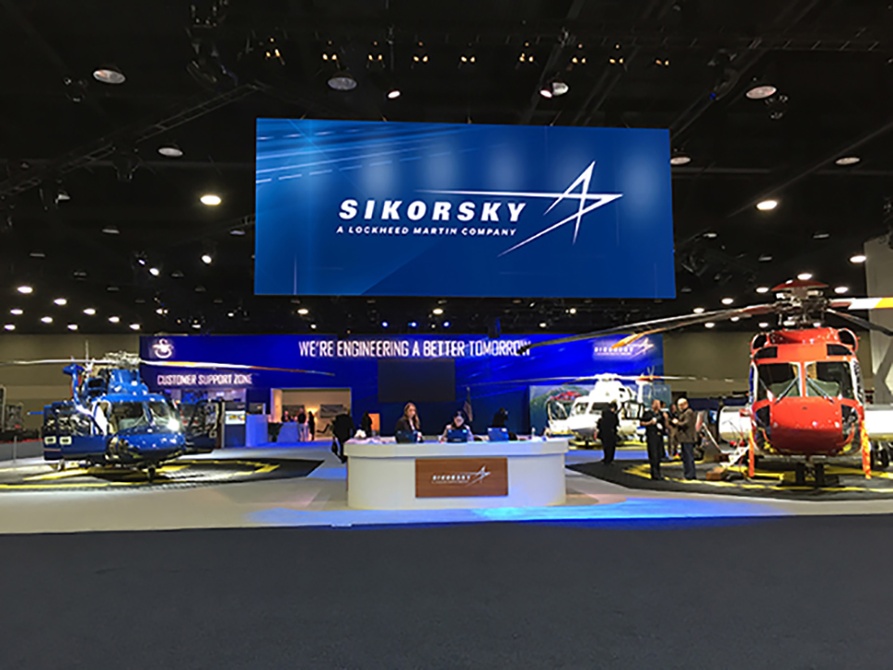 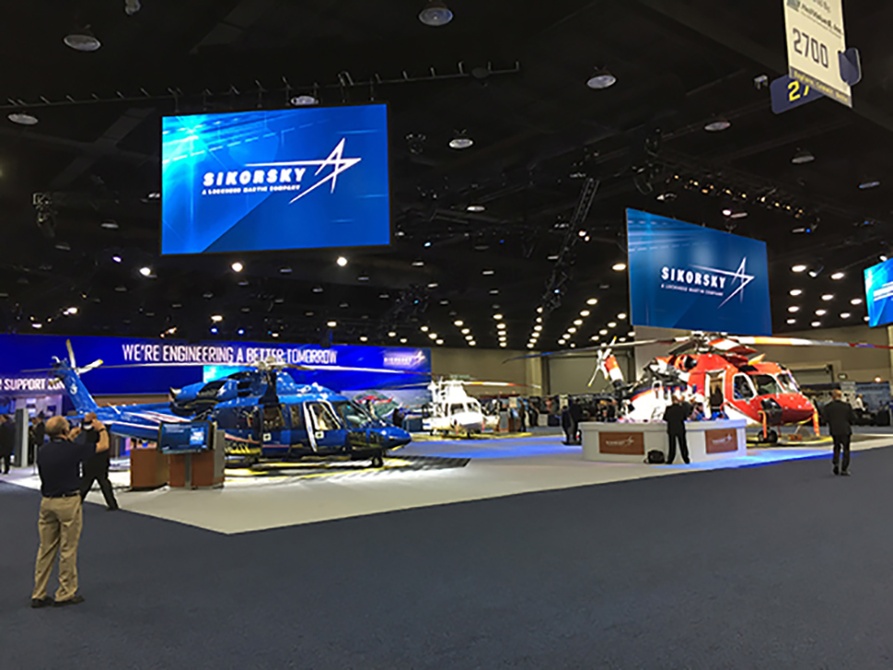 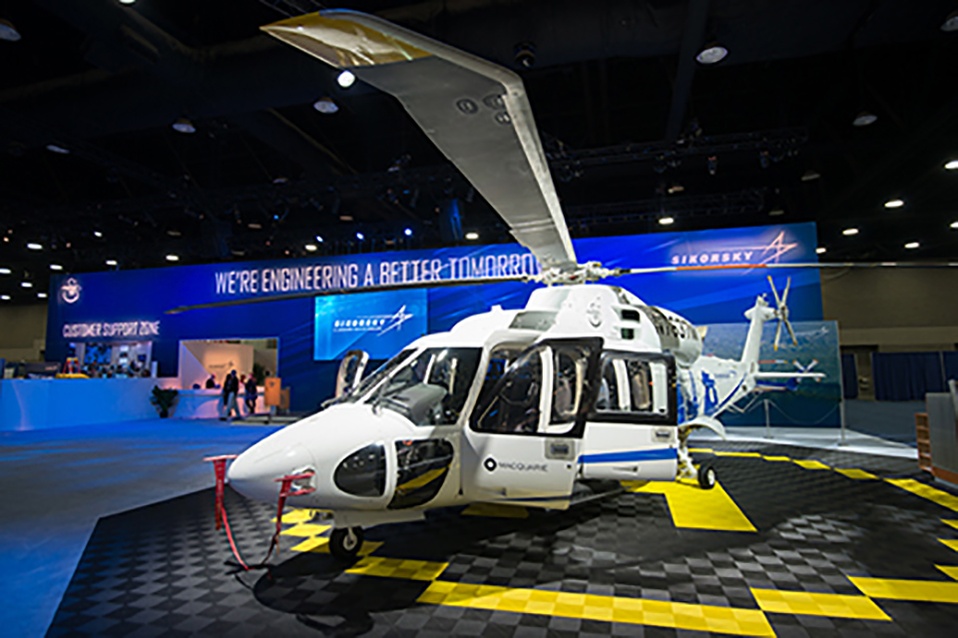 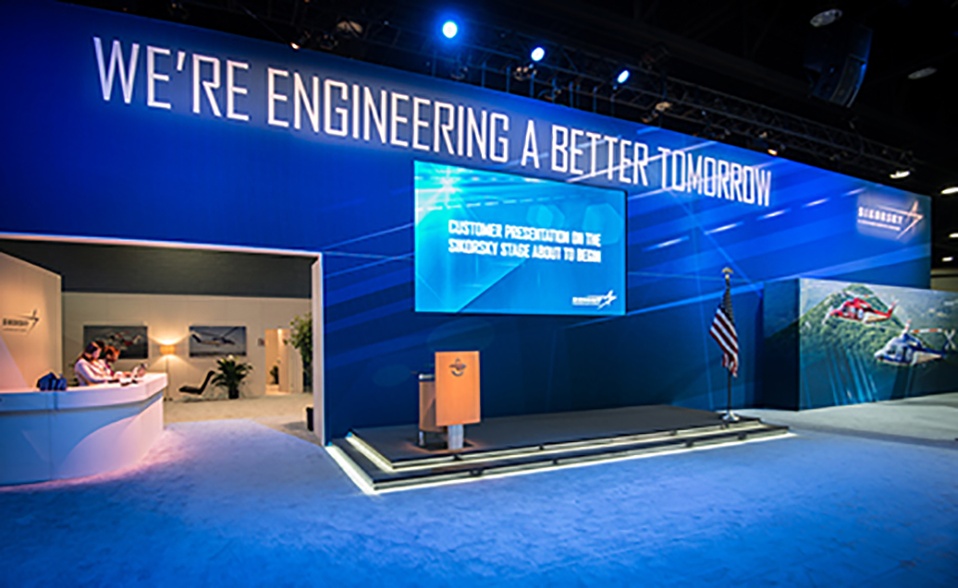 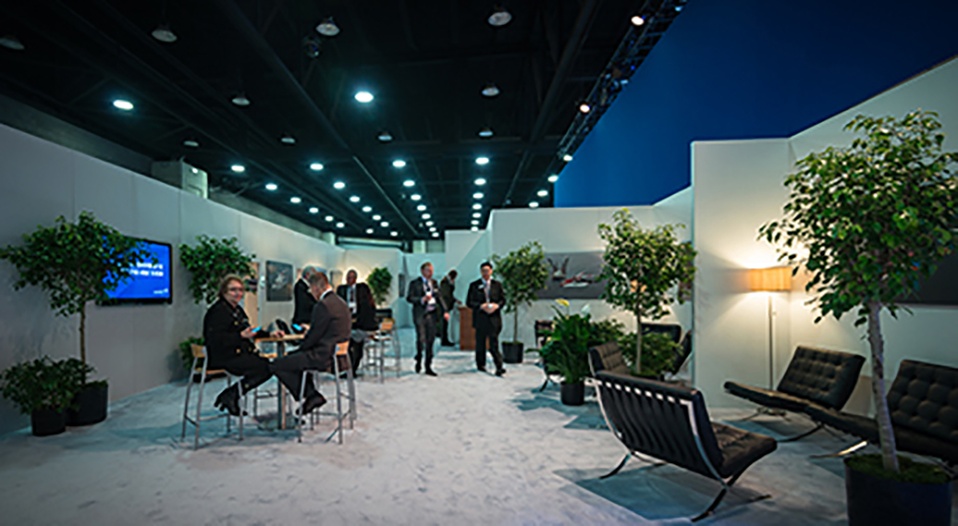 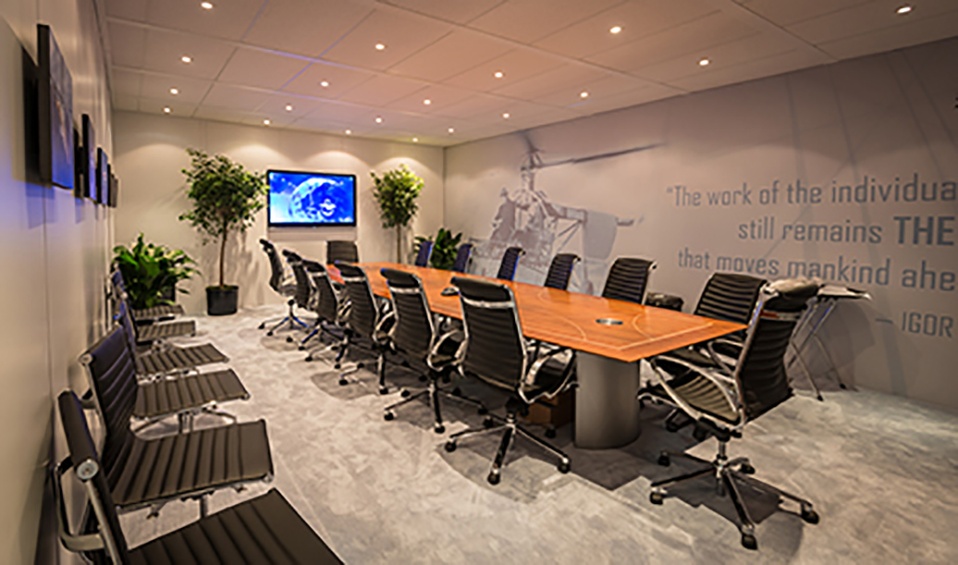 The purpose of this exhibit was to:

- Express the new identity and transition to a combined brand image with the new Lockheed Martin ownership of Sikorsky.
- Celebrate the opening of the new Fleet Management Center with expanded customer support capabilities.
- Showcase Sikorsky’s top of the line commercial helicopters: S-76D and the S-92 with focus on the S-92’s multi-mission transition from oil configuration to a search and rescue configuration.
- Live event recognition to present awards to current Sikorsky customers including high end video.
- Provide a quiet, exclusive, executive level lounge and (7) conference rooms for customer meetings.

The biggest challenge was having the budget reduction by two thirds from what it had been consistently for (6) years. To solve the budget reduction, the design solution created a simple, bold wall for strong identity which was a minimal exhibit component and functioned to separate the helicopter showcase from the more private conference rooms and lounge at the back of the exhibit. Along with that we used economical rental walls to create the lounge and conference rooms augmented with large photos of helicopters on the walls, warm lamp lighting and Fica trees as dividers between seating areas.

There was a last minute request to create a representation of the transition of the S-92 oil configured helicopter to a search and rescue mission. For the helicopter mission transition, we had (1) week and all hands on deck to create a CGI animation to illustrate the (4) change with components to change an oil mission configuration to a search and rescue configuration and had resources lined up to make even more requested tweaks to the video up to the day before the show.

We were also tasked with creating a visual plan and cue sheet for the live events including all large LED screens with a speaker IMAG capability. With last minute video submissions from client and changes to events, we created an evergreen visual plan and cue sheet for (2) large overhead LED screens, (1) main stage screen and screens at (2) other off main stage event areas in the exhibit. We managed changes during installation and rehearsals to ensure that the technical team had all information and time to cue media.

For the budget, this exhibit had very strong identity and a bold form with minimal exhibitry that delivered the impact and message. Lighting budget was not cut in order to create and maintain a high level of drama to showcase the aircraft.

The user is the commercial helicopter audience in the oil and search and rescue industries. The design allowed interactive exploration of visitors’ interests in the Customer Support Zone, desired access to all helicopters and live events that gave the audience the most current information developments from Sikorsky.

Sikorsky has been known for its mission of safety and service in rescue missions since its inception. This greater good is never lost on us in designing this exhibit for the last (7) years. There is a unique spirit in Sikorsky’s culture and legacy that we have attempted to express through the design. Most dramatically is the participation of Sergei Sikorsky the founder’s son and celebrating that rescue mission in his legacy in staging design of his presentations with the addition of his book signing events that draw loyal customers from afar – using bold graphics, lighting effects and focus for this important unifying event.