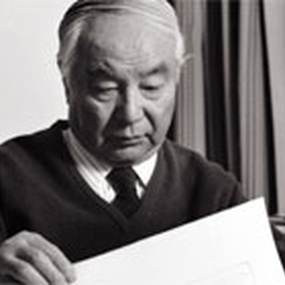 (1915 - 1997) Yusaku Kamekura studied principles of constructivism at the Institute of New Architecture and Industrial Arts, Tokyo, a private institute established and run by Renshichiro Kawakita with the aim of introducing Bauhaus design theories in Japan. He graduated in 1935, and then three years later joined the Nippon Kobo design studio (now Publishing on Design Inc.). For over a decade from 1937 he worked as art director on a number of Japanese magazines, including Nippon and Commerce Japan. In 1951 he participated in the establishment of the Japan Advertising Arts Club, which secured social recognition for the profession of graphic designer. In 1955 he took part in the Graphic ‘55 exhibition, together with Hiromu Hara, Paul Rand and others. Yusaku received an award from the Japan Advertising Arts Club in 1956 for a poster calling for peaceful use of atomic power. He co-founded the Nippon Design Centre in 1960 with Ikko Tanaka and as its director succeeded in bringing together graphic designers and industry at a period when Japanese business was deeply influenced by Western ideas. He designed posters, books, magazines, corporate symbols, logos, street signs and packaging. His work is distinguished by its dynamic composition, technical expertise and visual inventiveness, making full use of photography, color and geometric elements. Outside Japan, his best-known designs are his posters for the 1964 Tokyo Olympic Games and for Expo ‘70 in Osaka. Yusaku is credited with inventing the term “corporate identity graphics” to describe the “visual excellence” he sought to promote. In 1978 he became chairman of the newly founded Japan Graphic Designers Association, which publishes lavishly illustrated books on the work of Japanese graphic designers. For his exhibition “The Universe of Curved and Straight Lines: Designs by Yusaku Kamekura” he received the 25th Mainichi Arts Award in 1983. A successful teacher, lecturer and writer, he has won many awards for his designs, both in Japan and abroad, and his work is in many public collections.