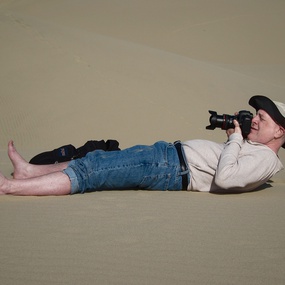 My work is Nudes. Frequently abstract, often formal, sometimes whimsical, and occasionally political. Not obscured, coy, demure, or reserved, but direct, frank, forthright, and unambiguously nude. I used to work exclusively in black and white, often with a very limited palette. My black and white images have won various awards and are in a number of private collections. Recently, I began experimenting with color. It’s quite an adventure as I am color blind and can’t reliably distinguish reds and greens. But most people aren’t green and with the advantage that digital photographs represent colors numerically, I’m doing ok. At least I think I am. My nudes are mostly of women and they are full, frank, and complete, some would say explicit. The frankness of my work is in counterpoint to the generally repressed view of female nudity in art. That seems like a surprising statement given that female nudity is ubiquitous. But it’s a curious nudity; like ancient Greek sculptures, most of the women depicted in art have no genitals, plenty of breasts and butts, but few vulvas. It’s as if they aren’t real women, but some sort of fantasy creature. I prefer to show real women. I may be doing something right; most of my customers are women. My most overtly political project is Portrait of America, a celebration of diversity, which I started shooting when George the Younger was president and it seemed that racial and ethnic intolerance was rising. Then America elected a black man as president and the project became less important as intolerance ebbed. But intolerance has come back with a vengeance and I’m finishing Portrait of America and preparing it for a show. America needs its celebration of diversity.