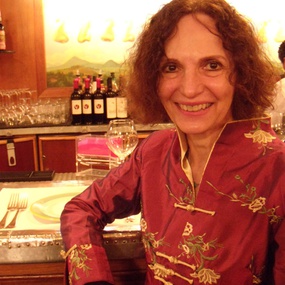 Teresa Fasolino lives and works in her Gramercy Park studio in New York City with her husband, sculptor Jordan Steckel, and their two rabbits, Antoine and Albert. The studio is adjacent to the School of Visual Arts, her alma mater, where she presently teaches courses in Illustration, and the History of Illustration. Teresa Fasolino has worked for most of the major magazines, publishers, and advertising agencies, evolving and developing her particular and recognizable style of illustrative painting. In addition to working in the print media, she has worked with architects and space designers, creating paintings for restaurants at the World Trade Center, and an 8-foot mural of “Famous Italian Noses” for the Trattoria Dell’Arte restaurant in New York City.

Her paintings have been exhibited at major art galleries, including “Hothouse Contemporary Floras” at the New York Academy of Sciences,” “ 200 Years of American Illustration” at the New York Historical Society, “Art for Survival” for the United Nations Environmental Program, “Pushing the Envelope,” “The Art of the Postage Stamp,” “Picturing Health,” and “Women in Illustration; Contemporary Visions and Voices” at the Norman Rockwell Museum and “Everything I Do Always Comes Back to Me” at SVA’s Visual Arts Gallery. Her work is included in the permanent collection of the Society of Illustrators, The Smithsonian, and the Baseball Hall of Fame at Cooperstown. Her work is in the collections of Nabisco and Grand Union as well as private collections. She is also a member of the first Illustrators Advisory Board of the Norman Rockwell Museum and teaches a course in Oil Painting at Fit in NYC. For the last decade, her interest in racehorses and their safe retirement after the track have led to a series of sporting paintings and equine portraits including exhibiting at the Spa Fine Arts Gallery Saratoga Springs New York.