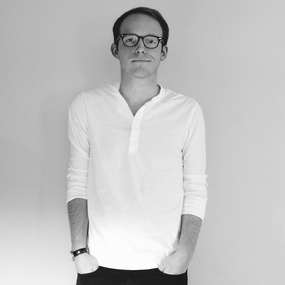 A multidisciplinary designer and illustrator living in Atlanta, Russell has collaborated with brands like Coca-Cola, Neenah Paper, Porsche, HarperCollins, and Tesla, and served as designer and illustrator for Kid President’s Guide To Being Awesome (written by Brad Montague and Robby Novak), which made the New York Times bestseller list in February 2015. Currently, he is the branding designer for Dixon Rye, consulting art director for Serenbe, designer for several agency partners and new brands, and a Visual Design instructor at General Assembly's Atlanta campus in Ponce City Market. In 2014, he illustrated Brilliant!, a children's book about adoption and hope, written by Matt Burgess.

Russell pursues a clean and sophisticated yet playful and human aesthetic.

New York Times: On February 22, 2015, Kid President’s Guide To Being Awesome, written by Brad Montague and Robby Novak, made the New York Times Best-Seller List, Children’s Middle-Grade. It remained on the Best-Seller List for five consecutive weeks. Role: Designer and Illustrator. (Art Director: Kristi Montague. Creative Director: SoulPancake.) Command X participant and finalist, 2015 AIGA Conference: In October 2015, I was one of seven young, up-and-coming designers chosen from around the nation to participate in Command X – a live, head-to-head design competition held at the 2015 AIGA Conference in New Orleans where the audience voted on each designer's work and presentation every day throughout the conference – and finished as a finalist in the last round.