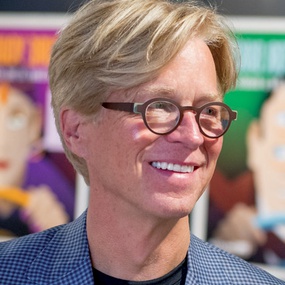 Rex Peteet is the co-founder of Sibley/Peteet Design Dallas and the founder of the firm’s second office, Sibley/Peteet Design Austin, established in 1982 and 1994, respectively. In 2010 Rex formed his own practice, Studio/Peteet Design, and merged it with the Sherry Matthews Group, a long time creative collaborator, friend, and client. Rex now works out of the agency’s Colorado Springs/Denver office. Over a career spanning 30+ years Rex and the SPD offices have worked for a wide range of clients, including packaging commissions for Milton-Bradley; promotional campaigns for International Paper, James River, and Weyerhauser; and branding for Brinker International’s Chili’s and Macaroni Grill restaurants. In addition, SPD has created identity and branding work for Fortune 500 companies, including Mary Kay Cosmetics, Haggar Apparel, Temple-Inland, and institutions such as the American Heart Association, Texas Tech University, and Medair. In 2005 Rex was the recipient of the Dallas Society of Visual Communication’s highest award, The Golden Egg, for career achievement. In 2015 Rex was honored with the AIGA Fellow award. In 2016 Rex was invited to exhibit his work in a one man show at Texas A&M Dallas VisCom Gallery. Rex’s work has been included in the permanent collection of the Library of Congress and most recently New York’s Poster House Museum. In addition, Rex is a founding member of AIGA Texas and sat on the advisory board of AIGA Austin for almost a decade. Rex lives with his wife Vanessa at the foot of Colorado’s Pikes Peak, where they run the trails and climb the 14ers every chance they get.