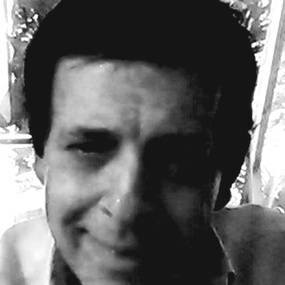 Oswaldo Miranda, known as Miran, is an art director, designer, illustrator and cartoonist. Editor of the magazine "Gráfica", an internationally recognized publication. He has been a member of TDC, ADC and SPD- Society of Publication Designers from 1977 to 1999. Also he has been a member of the AGI - Alliance Graphique Internationale ( 1994-2001 ). Abdicated of the last, after the death of its godfather Saul Bass that indicated it in the institution. As a cartoonist was published in Playboy magazine, Pardon ( ALE ), O Pasquim, Ovelha Negra., Humor Journal of the Diário do Paraná and A Raposa. He published two individual books of cartoons: "Miran. Um Rapaz de Fino Traço and "Good Luck" ( OfficinaDaVinci ) also included in the "Brazilian Anthology of Humor" ( L& PM ), "The New Humor of the Pasquim" ( Codecri ) and in the book "Caricature- the Graphic Image of Humor" by Joaquim Fonseca ( Arts & Crafts ) among others. The book monographic "Miran, 20 years of Graphic Design" was published in 1988. Miran received more than 450 awards, 75% are international. Among the prizes received are "Gold Medals" and "Silver Medals" by the São Paulo Creation Club-CCSP. He also received the "Silver Pencil" award at the Buenos Aires Design Biennial, awarded by the international jury and CAYC- ( ARG ). "Silver Medal" and "Award of Merit" at the Society of Publication Designers -SPD-15 / 16th Annual and numerous "Award of Excellence" at CA Design Annual, TDC, ADC Annual - Art Directors Club (NY), SI-Society of Illustrators of New York and "Bronze Medal" in Design Biennial of BRNO. It has been published in portfolio articles at Idea, Novum, Graphis and UL&C. He is registered in many memorable books of the history of the design like "The World of Graphic Design" (Verlag Hermann Schmidt), "Typographic Communication Today" (MIT Press), "Who, Who in Graphic Design" (Benteli-Wer Verlag) "First Choice '2 - AGI" ( Graphic-Sha ), "Magazines Inside and Out" ( PBC-Library of Applied Design ), "Diseño Gráfico Latinoamericano" ( Kodansha-Dai-Ichi ), "Typo-When, Who, How" ( Könemann Verlag ), "The Magazine in Brazil" ( Editora Abril ) and the recent already anthological "AGI-Graphic Design Since 1950" ( Thames & Hudson ). He exhibited in Germany, Argentina, Brazil, France, Japan and Sweden. His works are included in the collections of the Cooper-Hewitt Museum - NY, George Pompidou Center - Paris.

"25 Gold medals and 35 Silver medals" in the São Paulo Creation Club-CCSP, "Silver Pencil" award at the Buenos Aires Design Biennial, awarded by international judges. "Silver Medal" ( in illustration category ), 2 "Silver Award" ( in Story Presentation ) and 5 "Award of Merit" ( in Newsprint publications category ) and 1 "Award of Merit" ( in a New Publication category ) by the magazine "ETA" a children's publication at the Society of Publication Designers- SPD-New York - '15th annual and dozens "Award of Excellence" at CA Design Annual, CA Art Annual, TDC - Type Directors Club Annual and in the ADC- Art Directors Club Annual (NY ) with "Award of Merit" in the 66th, 67th,70th and 74th annual show with a "Distinctive Merit" ( 9th International show ) for "O-zone" campaign. Awards ( include "Bronze Medal" ) in the Biennial-BRNO 1978, 1982, 1984 and 1996. "Awards of excellence" in the Society of Illustrators of New York - 22th, 23th, Annual show and many awards of merit in "Typography annuals" -TDC-Type Directors Club of New York beginning with the first consecutive books "Typography Annual" #1,'2,'3,'4,'5,'6,'7,'8, and '14th and special inclusion in the "Typography'16". Of course, many awards in the "Creativity Annual" books and Show ( NY ). Also in the 70's, many pieces published in the most diverse categories on "Modern Publicity" ( GB ) annual books.

"Typography Master" in the book "Graphis Typography'2" - The awards and inclusion in the occasion of my contributions, were not like the current ones.

First brazilian designer and illustrator awarded in TDC, ADC and SPD all in New York, Article-Portfolio in magazines like Graphis #210 ( 1980 ) presented by Stanley Mason, NovumGebrauchsgraphic ( 4/1981 ), Idea magazine #174 ( 1982 ) and again in NovumGebrauchsgraphic ( 4/1985 ), to have large article portfolio at "U&LC " and presentation signed by Herb Lubalin ( U&LC Vol. Seven, Number Four/1981 ), sponsored and presented to be a member on AGI- Alliance Graphique Internationale by Saul Bass in 1994, individual exhibition at Galerie von Oertzen - Frankfurt/Main ( 1985 ), inclusion in the book "The World of Graphic Design" published by Verlag Hermann Scmidt Mainz in 1997, presented by Prof. Olaf Leu, special article-portfolio ( 25 pages ) in "NewGraphic" magazine Vol. 23 - China ( 2010 ), inclusion in the book "AGI- Graphic Design Since 1950" ( 2007 ), inclusion in the exhibition: "L' Image Des Mots" at the Centre George Pompidou, Paris-France,1985 ( with my design works include in the museum collection ) and more inclusion of my design pieces in the Deutsches Plakatmuseum, Essen ( 1998 ), the large selection of my work in the "World of Graphic Design Now '5 - Editorial" ( Kodansha, Tokio/JPN ), large number of pieces selected in the "Typographic Design" edited by David Brier ( 1993 ), first South American selected to participate in the "Letterheads: A Collection from Around the World" edited by Takenobu Igarashi ( 1987 ) also in 2012 in the book "TDC Celebrate 65" - Sixty-Fifth Anniversary, taking the page 55 ( side by side to prominent colleagues ), are some examples.