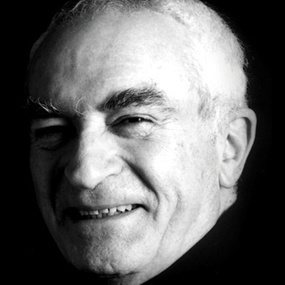 Massimo Vignelli, born in Milan, studied architecture in Milan and Venice. He came to the United States from 1957 to 1960 on fellowships from Towle Silversmiths in Massachusetts and the Institute of Design, Illinois Institute of Technology, Chicago. In 1960, with Lella Vignelli, he established the Vignelli Office of Design and Architecture in Milan. In 1965, Massimo became co-founder and design director of Unimark International Corporation. With Lella, he established the offices of Vignelli Associates in 1971, and Vignelli Designs in 1978. His work includes graphic and corporate identity programs, publication designs, architectural graphics, and exhibition, interior, furniture, and consumer product designs for many leading American and European companies and institutions.

"I like design to be semantically correct, syntactically consistent, and pragmatically understandable. I like it to be visually elegant, and above all timeless." - Massimo Vignelli

Mr. Vignelli studied art and architecture at the Politecnico di Milano in Milan, Italy, and later studied in Venice at the Universita di Architetturà.

Mr. Vignelli has taught and lectured on design in the major cities and universities in the United States and abroad. For the past ten years he has taught a summer course at the Harvard University Graduate School of Design. He is a past president of the Alliance Graphique Internationale (AGI) and the American Institute of Graphic Arts (AIGA) and the vice president of The Architectural League.