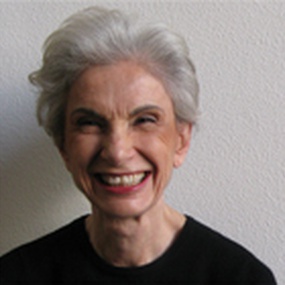 Lella Vignelli was born in Udine, Italy. She received a degree from the School of Architecture, University of Venice, and became a registered architect in Milan in 1962. In 1958, she received a tuition fellowship as a special student at the School of Architecture, Massachusetts Institute of Technology, Cambridge. In 1959, Ms. Vignelli joined Skidmore, Owings & Merrill, Chicago, as designer in the interiors department. The following year, with Massimo Vignelli, she established the Vignelli Office of Design and Architecture in Milan. In 1965, she became head of the interiors department for Unimark International Corporation in Milan and in New York (1966). In 1971, the Vignellis established Vignelli Associates, where Lella Vignelli was initially Executive Vice President, and is now Chief Executive Officer. Seven years later, they formed Vignelli Designs, a company dedicated to product and furniture design, of which she is President.

Lella and her husband won the AIGA Medal In 1982.

She studied at the School of Architecture, University of Venice, and became a registered architect in 1962 in Milan.

She is a frequent speaker and juror for national and international design organizations. She is the American Institute of Graphic Arts (AIGA), the International Furnishings and Designer Association (IFDA), a member of the Industrial Designers Society of America (IDSA) and the Decorators Club of New York.