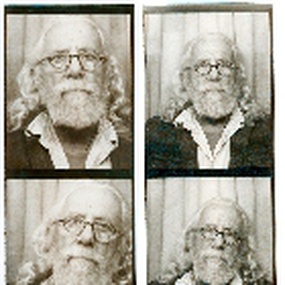 John Running has lived in Flagstaff, Arizona for the past forty nine years. He has been making photographs for advertising, design and editorial clients for over forty years. He specializes in photographing people either on location or in the studio. His photographs stand out because they have a style that is personally creative and graphically strong. Give him 1/125th of a second and he will give you so much more. Originally from Buffalo, New York Running studied earth sciences at the New Mexico School of Mines and then spent four years with the United States Marine Corps, where he served in the Mediterranean, Caribbean and West Indies. Afterward he studied for a Degree in Anthropology at Northern Arizona University in Flagstaff, Arizona. He started freelancing in 1970, and has a full working studio, in a historic building in Historic Downtown Flagstaff Arizona John Running is a different breed of photographer. He is a rare photographer who approaches his subject person to person with the openness and respect that encourages true human exchange. John doesn’t create images as mirrors of himself; he allows subjects to retain their own identities. His subjects evolve from acquaintances to friends as John records moments of their lives with full consent. In an era of stylization and flash, John’s pictures are serene and unmannered, bestowing dignity and respect on each subject portrayed. By giving of his own humanity, John allows his subjects to sustain the portrait while communicating their humanity to us. Many encounters with photographers leave the subject feeling wrought, used and resentful. John leaves them feeling befriended. Instead of stealing souls – as some cultures believe photographers do – John enriches them by contributing part of his own. Photo assignments have taken him to Italy, Germany, France, the Netherlands, Spain, Italy, Scotland, Jordan, the West Bank and the Gaza Strip, and South America. His clients include Eastman Kodak, Polaroid, Nikon, Ilford, Coors Beer, Lee Jeans, US. West, Sterling Commerce and Canyon Records. He has also published seven books including Honor Dance, Pictures for Solomon, Dancer and Halo of the Sun.

I specialize in photographing people, portraits, On location or in the studio. Corporate chiefs and Indian Chiefs.

John Running has received awards from Nikon, Ilford, Photography Magazines including GRAPHIS and his work is being archived at Northern Arizona University's Special Collections Library.

John Running is a "Master Photographer". His experience from over forty years gives hime the ability to look, then see and then

I Row boats down the Colorado River through the Grand Canyon.