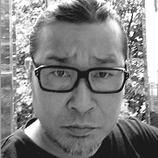 Born in 1964, Jisuke Matsuda founded Atelier Jisuke in 2010. Influenced by the Bauhaus at the age of 18, he taught himself design and persisted in spite of repeated frustrations. In 2011, he devoted himself to poster production. Since then, he has participated in many of the world's poster competitions, including the Graphis Poster Annual. His design philosophy is to view the relationships among line, space, and form as similar to human relationships.