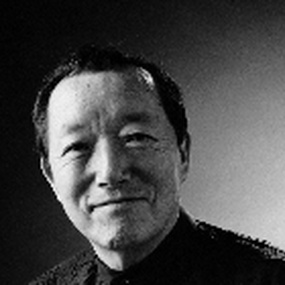 (1930 – 2002) Ikko Tanaka was a graphic designer whose fusion of Japanese tradition and the International Style contributed a modern sensibility to Japanese poster and publication design. When Ikko began working in the late 1950’s, contemporary Japanese designers were trying to balance respect for the past with the new commercially driven industrial society. Ikko succeeded in marrying past and present in graphic compositions that were strong and clean, colorful and playful and precise. He borrowed the simple shapes and patterns of ancient arts and incorporated them into designs that were definitely of his time and place. One of his best-known posters, conceived in 1981 for the dance troupe Nihon Buyo Performance and reused for various purposes, features an abstract version of a geisha. Rather than a classic realistic rendering, Ikko created the head and shoulders out of stark geometric forms on a grid: squares and rectangles make up the hair and face. It is typical of Japanese simplicity, but innovative in its angularity. Ikko further bridged a professional gap between the many experimental Japanese designers and those who devoted themselves to the service of corporations. In addition to his many posters and booklets for cultural organizations, he created logos, package designs and annual reports for Hanae Mori, Issey Miyake and Mazda. Ikko was born in 1930 in Nara, Japan, where as a child he studied art. He moved to Kyoto and became involved in modern drama and joined the Atelier-za theatrical study group. There he became acquainted with Kabuki and Hokusai's 19th-century wood block prints. In 1963 he established a design studio in Tokyo. By the 1970's he was one of the leaders of the commercial art world as a graphic designer, art director and editor of a series of books on Japanese culture. In his books Ikko devoted as much energy to materials and production as to design. In 1994 he was inducted into the New York Art Directors Club Hall of Fame. He died in 2002 at the age of 71.