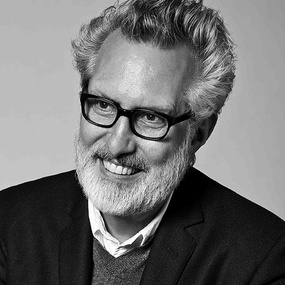 Woodward has worked for the past sixteen years as GQ’s Design Director (2001-present), having previously served a similar tenure at Rolling Stone (1987-2001). He has taught Graphic Design at Parson’s School of Design, conducted workshops at Art Center and The International Center of Photography, lectured world-wide and juried more competitions than he’d care to count. Notable exhibitions of his work were presented in NY and Japan. He has designed memorable art and photo books over the arc of his career for all the major publishers, including Abrams, Assouline, Bullfinch, Little Brown, Random House, and Rizzoli. Woodward and photographer Mark Seliger formed a directing partnership, and together directed music videos for Lenny Kravitz, Natalie Merchant, Joan Osborne, and Shawn Colvin, among others––winning a Clio for Courtney Love & Hole’s ‘Violet.’ They developed the signature look for Gap’s first ever television campaign, and over a two-year run directed a string of commercials starring LL Cool J, Lena Horne, Aerosmith, Run DMC, Luscious Jackson (and others)—shot by legendary cinematographer, Frederick Elmes—and named ‘The Best Commercial Campaign of the Year’ by The New York Times. (1992—2002) Long-time designers have left his team to become Design Directors at New York, Esquire, W, Dwell, Entertainment Weekly, Bloomberg Pursuits, Traveler, Fortune, ESPN, More, Outside, Bon Appetit, Glamour, Golf Digest, Martha Stewart Living, and The New Republic.

“Though we all know there are a million ways to do anything, the work that lasts will always look like it was the only way to do it.”

Rolling Stone’s ‘Generation Next’ special issue was awarded the Society of Publication Designers ‘Best of Show’—the first and only year it was given. (1994) He has been honored with lifetime achievement awards from The Type Directors Club and The Society of Illustrators. (1997/2006) At the end of his first full year, GQ won SPD’s ‘Magazine of the Year’ for Woodward’s redesign. (2002) He was inducted into The Art Directors Hall of Fame, the youngest inductee in the organization’s then 87-year history. (1996) At the institute’s first ever ‘Design Legends Gala’, he was awarded his profession’s highest honor, the AIGA Medal, in recognition of his distinguished achievements and contributions to the field. (2004) He was named the most influential magazine designer of the past 25 years by Fast Company. (2011)

His work has enjoyed a steady presence in all of the most respected design publications, including Graphis and Communication Arts. While working at Westward (the Sunday magazine of the now defunct Dallas Times Herald), Woodward designed an El Salvador portfolio of staff photographer Jay Dickson’s pictures that won the Pulitzer Prize for feature photography. (1982) Over the past 30 years his magazines have been National Magazine Award Finalists a total of 43 times in Design, Photography, and General Excellence (16 at RS, 27 at GQ); winning 10 Ellies (5 at RS, 5 at GQ); including back-to-back Design wins in 2011 and 2012. This year, its first as a re-imagined quarterly, GQStyle was a General Excellence Finalist in ASME’s National Magazine Awards. (2016) GQ was a Finalist for ‘SPD’s ‘Magazine of the Year’ for 11 consecutive years, and was awarded the gold medal a total of 4 times during that run. In addition, GQ has been a ‘Brand of the Year’ Finalist five years in a row—every year the category has existed.

‘Going Over Home,’ a one-man show of his photographs, was exhibited at 401 Gallery in Manhattan. The photos—originally taken on assignment in 1986 for a two-part article in The Atlantic Monthly by Nicolas Lemann—sought to trace the African American migration pattern in 1960s America from the small southern town of Canton, Mississippi to the Chicago’s South Side. (2008)

He studied graphic design for a year at Memphis State, having transferred there from Mississippi State—where he had studied practically everything else. Largely self-taught, he learned his craft while coming up at several city and regional magazines, including Texas Monthly.

“Woodward and his talented staff have set a new standard for what editorial design can be, in what must be one of the longer hot streaks in magazine design history. Surveying his work, one is struck not just by its formal beauty and appropriateness, but by the sheer virtuosity of its design responses.” — Michael Bierut “Woodward’s career can be traced to the lineage that begins with Alexey Brodovitch and continues through Henry Wolf, both of whom expressed admiration for innovation grounded in tradition.” — Steven Heller “I guess we all make mistakes, thinking that our way is the only way to go. I was guilty of this where it concerned my work as an art director. Along came Fred Woodward with Rolling Stone. That was when I realized there was something new that was good.” — Henry Wolf “The invention and high energy that he brought to the job in the beginning has never flagged. One might truthfully say that Rolling Stone is better now than it has ever been.” — Milton Glaser “Fred is truly a visionary in the field of magazine art direction. He’s a creative force whose energy, skill, and talents continue to amaze and astonish me.” — Jann Wenner “Fred has not only nurtured an entire generation of up-and-coming designers, he’s also always been an editor, in the truest sense of the word. He hasn’t just made GQ a better-looking magazine, he’s made it a better magazine, period.” — Adam Rappoport “Fred Woodward has been such an incredible force in the field of design and art direction that it is hard to imagine where our industry would be had he not existed.” — Anita Kunz “There’s no doubt that Fred is the best magazine art director in the country, or even the Western world.” — Roger Black “In my estimation, Fred Woodward is one of the best magazine art directors of all time.” — Paul Davis