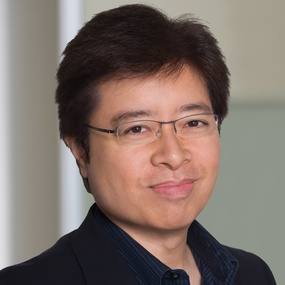 Earl Gee is Partner and Creative Director, with Fani Chung, of Gee + Chung Design, the award-winning multidisciplinary brand communications firm they founded in San Francisco in 1990. The firm creates intelligent, innovative, and compelling design solutions which provide strategic value to clients. Earl has built an international reputation for creating successful branding, print, packaging, environmental, and interactive programs for many of Silicon Valley’s most influential companies including Apple, Applied Materials, IBM, Oracle, National Semiconductor, Sun, and Symantec, enjoying the conceptual challenge of making complex technology understandable, meaningful, and memorable to audiences. Notable projects included the Apple educational training brochure and software packaging, Applied Materials Technical Seminar Series at SEMICON West tradeshow graphics and collateral, National Semiconductor PowerWise and SolarMagic brands, Oracle Information Highway book, Sun Microsystems worldwide operations brand, and Symantec software packaging and annual report. He has also been responsible for the creative direction of the Bay Area Air Quality Management District branding program, Chronicle Books tradeshow and Star Wars Chronicles book, Greenleaf Medical poster and brochure, San Francisco Art Commission Market Street Art in Transit brand, and ArtCenter College of Design Alumni Council, DOT Launch, and Design Accelerator brands. Earl began his career in 1983 as a designer at Landor Associates in San Francisco, creating identity programs for Fortune 500 companies. Notable projects included the Axel Johnson Industries (Sweden) brand, RCA Columbia Pictures MusicVision brand, Atari packaging, City and County of San Francisco annual report, and Art Directors Club medal-winning Trauma Foundation poster series. In 1984 Earl became a senior designer at Mark Anderson Design in Palo Alto, where he created award-winning design programs for a wide range of clients. Notable projects included the Herman Miller corporate showroom and collateral, Oakland Museum “Graphic Art of Charles Schulz” exhibition catalog and collateral, PG&E “Dimensions” brand and collateral, Datacopy annual report and brochure, and Z Typography posters and delivery vehicle. Earl was named in Graphic Design USA’s 50th Anniversary Survey as one of the 50 “Most Influential Graphic Designers Working Today,” one of its “People to Watch in 2010,” and was one of only 50 U.S. graphic designers selected for the international edition of Who’s Who in Graphic Design. He has served on a U.N.-sponsored design delegation touring China, lectured at leading universities and design organizations across the country, and served as a frequent juror for major design competitions including Communication Arts, Creativity, Spark, Critique, STEP, Publish, and Exhibitor. He has served on the board of the San Francisco chapter of AIGA, the professional association for design, as membership chair and was honored as a prestigious AIGA San Francisco Fellow in 2015 for his significant contribution to raising the standards of excellence in practice and conduct within his design community and AIGA chapter.   Under Earl’s creative direction, Gee + Chung Design has won multiple gold and silver awards from virtually every major design competition including Graphis, AIGA, Communication Arts, Print, I.D., HOW, STEP, the One Show, Art Directors Club, Type Directors Club, Society of Typographic Arts, Society of Publication Designers, and Society for Environmental Graphic Design. His work has been exhibited internationally and is in the permanent collections of the U.S. Library of Congress, AIGA Archives, and ArtCenter College of Design Archives.

“Use a unique point of view: your client’s.” By creating a unique positioning for our clients, our design solutions are unique for them alone, resulting in a different approach for each client. “Understand the past to design the future.” Only by recognizing what has been already done can we identify new opportunities for design innovation, differentiation, and distinction. “Create design that engages the mind.” The most effective designs get people to think, invite viewer participation, and establish an emotional connection with their audience. “Craft a compelling and evocative story.” The most memorable designs incorporate different levels of meaning, enabling our audience to discover something new every time. “Create an iconic, universal, and timeless solution.” The most enduring designs represent the best of their kind, are universally understood, and withstand the test of time. “Focus on creating client value, not visuals.” Every design decision we make should further our client’s mission, build their brand, and create enduring value for their company. “Design is not only about results, but relationships.” We are dedicated to making the creative journey with our clients as enjoyable, productive, and rewarding as the outcome.

Earl has been a member of the San Francisco chapter of AIGA, the professional association for design, since 1984. He served on the board of AIGA San Francisco as membership chair from 2010 to 2012, increasing membership from 1,200 members in 2010 to nearly 1,800 members in 2012, establishing AIGA SF as the second largest chapter in the nation. In 2015 he was honored with the prestigious AIGA SF Fellow Award.