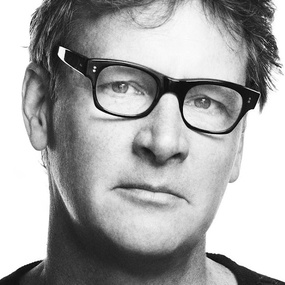 Craig Cutler is a conceptual photographer who turns ideas into images and images into stories, always looking for a new way to tell them. Evolving. Creating Concepts. Directing visions. Surrounding himself with great people. These are the priorities that drive Craig Cutler’s work. Almost as soon as a client expresses an idea, Craig begins sketching, giving shape to abstractions. He re-imagines and reworks his vision many times before actualizing it in print and video. Through this process, he imbues both his commercial and personal photographs with an internal motion; even his signature stripped-down portraits hint at the many currents running under every surface. The artist is in command of cutting-edge technology, using it when it allows for true innovation, as in his personal project CC52. Yet he recognizes that technology cannot save a weak concept, and stays focused on the heart of his work ideas. Michael Paterson, Creative Director at Ogilvy & Mather, says Cutler’s work pushes the boundaries of commercial photography into the art world. Soon after Craig began his career in 1987, his conceptual approach combined with his rigorous planning and ease at collaboration brought major clients into his studio in New York City, including Bombay Gin and Mercedes-Benz. Over the years, many other major players have retained Craig to create award-winning campaigns including IBM, HP, Chase, Exxon, Microsoft, Samsung, Armstrong, Starbucks and eBay. Cutler also participates in myriad exhibitions, notably at the Carnegie Museum of Pittsburgh. Asked to explain his success, he says simply, I like the process everything that leads up to the eventual image. Craig’s belief in the process of creation instructs his life, not just his work. He is currently restoring a 1963 356 Porsche as well as a 1972 2002 BMW, although he recognizes that neither will be finished in his lifetime. Craig does not stop moving in his spare time, either. In 2012, for fun, he ran the Marathon du Medoc in France.