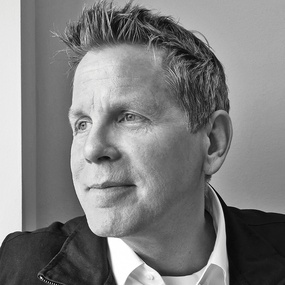 Charles S. Anderson is a design entrepreneur and creative director who, over the past 35 years, has successfully combined the sometimes opposing elements of art and commerce. Early in his career, Anderson was an influential designer in the postmodern movement, and rejected slick corporate design in favor of a more human, personal aesthetic that utilized vernacular images and uncoated paper. Many of the printed artifacts designed by CSA from that period were produced for the French Paper Company. CSA Design helped create a new design approach by merging elements of the past and present, resulting in a modern design aesthetic that continues to this day. Throughout his career, Anderson has championed the idea of design as a product rather than just a service to corporations, and in doing so has helped change the profession by inspiring a generation of designers to produce their own products. Anderson was influenced by his early exposure to pop culture comic illustrations, contrasted by his years at The Minneapolis College of Art and Design studying under his mentor and first employer, Peter Seitz, who was educated at the New Bauhaus under Otl Aicher and at Yale under Paul Rand. Anderson was the first designer recruited to join the Duffy Design Group, where he later became a partner. In 1989 Anderson formed Charles S. Anderson Design Company. Anderson believes that great design is about making something that adds richness to people's lives; something inspiring, memorable, funny, abrasive, ironic, elegant, ugly, human-anything but uninteresting. He sees design evolving into an art form, rich in cultural vocabulary and personal expression, an approach based on a design philosophy, that first acknowledges where we come from, and uses that understanding to create a new path to the future. Anderson views graphic design as a product, rather than just a service, and also as a viable art form in it's own right that has moved beyond it’s origins as solely a vehicle for corporate communication.

Commercial Art is a better description of our work than Graphic Design, because we create art for commerce. Art is the aesthetic, human, cultural part of design that makes it interesting and compelling. Our goal is to create work that’s both timely and timeless, inspired by the entire history of modern design. We believe that the recipe for good design begins with a heaping dose of give a shit topped off by hard work, skill and craft, with a dash of humor and a sprinkle of compassion and humility. (Talent is also helpful.) We believe that strategy is important, but we find that it works best when joined with artistic intuition, good ideas, and attention-getting art. We believe that a logo's most valuable asset is the reputation of the company that it represents, and that the most compelling aspect of a company's brand is the truth. We believe that our job as designers is not just to create a brand or deliver a message, but to give that brand or message a tangible and inherent artistic value that connects on a visceral, as well as visual, level.

Charles S. Anderson Design Company specializes in creating brand identities, in addition to analog, digital, and interactive products, and is among the profession’s most influential design firms. In addition to their client work, CSA Design is unique in creating an extensive archive of licensable artwork, and has expanded the definition of design. Inspired by the history of design and illustration, CSA Images is a leading design resource for the creation and preservation of print design in the digital realm.

CSA Design has received honors and awards, including The American Institute of Graphic Arts Medal, the highest honor for exceptional achievement in the field of design; The Society of Typographic Arts Honorary Lifetime Membership Award; The Minneapolis College of Art and Design Outstanding Alumni Achievement Award; The University College Designers Association Honorary Lifetime Membership; and membership in Alliance Graphique International (past member). CSA Design has also been awarded top honors in nearly every major design competition, including multiple gold pencils from The One Show, multiple gold and silver awards from the New York Art Directors Club, and multiple awards from the Communication Arts Design Annual, Graphis, Print, and others.

"Charles Anderson is a formalist, stylist, and entrepreneur who over the past thirty years—one generation—has made invaluable contributions to design and has produced design that represents the highest values of art and commerce. Moreover, he’s spawned a generation of strong designers. One can see his influence on designers who wed the past and present into contemporary stylistic manifestations. He has a personality and character to his work that is unique to him. If we measure our AIGA lifetime achievement medalists by the breadth of their shoulders, I think many stand on his without breaking his back."