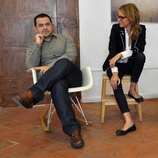 Atlas Atlas is an award winning design agency with over 40 years of international experience and knowledge. Based in Palma de Mallorca (Spain), they work for local, national and international clients from across the globe. Established in 2013, Atlas is directed by two partners — Astrid Stavro and Pablo Martín — and were later joined by Rafa Roses as a Senior Associate. They have chosen to keep the studio relatively small and are currently a team of ten designers supported by a studio manager. Each of their clients work directly with one of the partners and/or Senior Asscociate. This allows them to overview every project personally with passion and personal commitment, offering hands-on solutions for a select range of clients. The underlying principles at Atlas are clarity, simplicity and commitment to ﬁnding unique, tailor-made results for every project in a conscious effort to avoid repetition and formulaic responses. Astrid Stavro (Founding Partner & Creative Director) The daugther of a publisher and a printer, Astrid Stavro has ink running through her veins since her birth in 1972 (Trieste, Italy). As a natural born 'blue-blood' designer, she initially explored the printed word at college through philosophy and literature. She went on to study the expression of the printed word through Graphic Design, graduating with a First Class Certificate from Central Saint Martins College of Art & Design and with Distinction from The Royal College of Art in London. Stavro then moved to Barcelona where she founded and directed the award-winning Astrid Stavro Studio for ten years. She specializes in concept driven art direction and editorial design. Stavro has an international reputation for ideas based, thoughtful designs executed with exquisite typographic sensibility and attention to craft. Her approach is rigorous, letting the content speak for itself and avoiding frivolous or superficial solutions. She lectures extensively on design related subjects worldwide and has taught editorial design in various colleges. Her work has been widely published and exhibited and she is a frequent Jury Member in design competitions worldwide including twice at D&AD, one of them as Foreman in Book Design. Stavro has written numerous articles for some of the top international design Journals and is currently the Design Director and Editor at large of Elephant magazine. Pablo Martín (Founding Partner & Creative Director) Pablo Martín was born in Barcelona (Spain) in 1964. He studied graphic design in EINA — where he eventually became a teacher in typography and editorial design for more than 15 years. Martín worked for Mario Eskenazi Associates between 1985 and 1989. He later joined Vignelli Associates in New York. On his return in 1993, he founded the eponymous studio Grafica alongside Fernando Gutiérrez, who left the company in 2000 to become a partner at Pentagram UK. Grafica was responsible for the design of Matador magazine, El País de las Tentaciones, the mythical campaigns for the shoe manufacturer Camper, lamp producer Metalarte and the redesign of La Vanguardia and all it’s weekly supplements. Between 1993 and 2013, Grafica also worked as a consultancy for clients such as Airbus Industrie, Bticino, Canal Sur, Grupo Prisa, Phaidon Press, Barcelona City Council and ICEX, amongst many others. In 2014 Martín won the Spanish National Design Award in the Professional Design Category, recongnizing an outstanding lifetime achivement in graphic design. Awarded by the Ministry of Economy and Innovation, it is the most prestigious Spanish design award and was handed in person by the King of Spain, Felipe VI.

Both Astrid Stavro and Pablo Martín are members of AGI (Alliance Graphique Internationale), the world's most prestigious design association. Other memberships include D&AD, AIGA (Design Leaders), ISTD, The Typographic Circle, SPD, TDC and ADG-FAD. They lecture and give workshops on design across the globe and are frequent Jury members in the most prestigious award competitions and universities worldwide. Stavro is currently a member of the board of ADG-FAD (the Spanish Association of Graphic Designers) and former Secretary of the Spanish chapter of AGI for 4 years. Martín is the current President of AGI Spain, former President of the Graphic Communication Foundation and former member of the ADG-FAD board as well as the Art Directors Club of Europe.