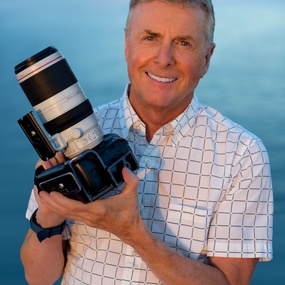 Art Wolfe's career has spanned five decades, a remarkable testament to the durability and demand for his images, his expertise, and his passionate advocacy for the environment and indigenous culture. During that time he has worked on every continent, in hundreds of locations, and on a dazzling array of projects.

Wolfe is the proud recipient of the Nature's Best Photographer of the Year Award, the North American Nature Photography Association’s Lifetime Achievement Award and the Photographic Society of America’s Progress Medal for his contribution to the advancement of the art and science of photography; he has been awarded with a coveted Alfred Eisenstaedt Magazine Photography Award. The National Audubon Society recognized Wolfe’s work in support of the national wildlife refuge system with its first-ever Rachel Carson Award. In 1999 he was named to the UW Alumni Association’s magazine list of 100 “most famous, fascinating and influential” alumni of the 20th century. His books and TV show have also garnered numerous awards from the Independent Book Publishers Association, Applied Arts, PubWest, and others. His TV show "Art Wolfe's Travels to the Edge" won five Tellys for outstanding achievement.

Human Canvas selected for Graphis Photography Annual 2014 The Living Wild selected for the Graphis Photo Annual 2002 Graphis recognizes "Light on the Land" and "Migrations" as two of the top 100 books published internationally in the 1990s.

Over 100 published works, television shows, the advancement of photography as a unique medium capable of bringing awareness and preservation to our environment

Wolfe graduated from the University of Washington with Bachelor's degrees in fine arts and art education in 1975, where he studied under professors such as Jacob Lawrence.

Wolfe's goal has always been to win support for conservation issues by “focusing on what’s beautiful on the Earth.”