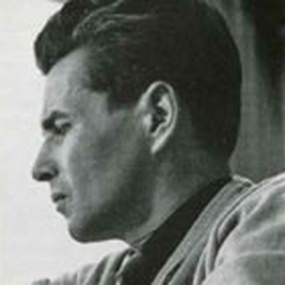 (1914 – 1996) Born in Rapperswill, Switzerland in 1914, Josef Müller-Brockmann was one of the leading pioneers of the Swiss Modernism — a graphic method utilizing a grid-based design that eliminates needless artistic expression. Unlike much of today’s graphic design, Müller-Brockmann’s work reflected an ethos rooted in minimalism. It was understated and didactic, but it was also beautiful and iconic. Indeed, throughout his career he was justly regarded as one of the most talented and resourceful advertising and design artists in Switzerland. And he could do it all, designing concert and exhibition posters, brochures, typefaces, dinnerware and even stage design. In 1954’s Graphis Magazine, Issue 53, he was asked about which of these activities were his favorite and offered no definitive answer. He liked them all and viewed himself as a problem solver. Müller-Brockmann began his career as an apprentice to the design and advertising consultant Walter Diggelman. In 1936 he established his own design studio in Zurich. By the 1950s he was established as the leading theorist of the Swiss Style and practiced the method to much acclaim. For example, his \\'Musica viva\\' poster series for the Zurich Tonhalle drew on his belief that people learn from personal life experience. To that end he was able to create a visual correlative to the harmonies of the music. Müller-Brockmann was the founder and co-editor of Neue Grafik magazine, which spread the principles of Swiss design internationally. He was also involved in educating the next generation of graphic designers and taught at the Kunstgewerbeschule in Zurich and the Hochschule für Gestaltung at Ulm. He is the author of The Graphic Artist and his Design Problems (1961) and History of Visual Communication (1981). He has contributed to many symposiums and has held one-man exhibitions in Zurich, Bern, Hamburg, Munich, Stuttgart, Berlin, Paris, New York, Chicago, Tokyo, Osaka, Caracas and Zagreb. In 1987 the State of Zurich awarded him a gold medal for his cultural contribution. The work of Müller-Brockmann is legendary and he is best remembered for his commercial work for IBM, Geigy, Olivetti, Rosenthal and the Swiss Railway. He kept working, travelling and exhibiting his work until he died in 1996.