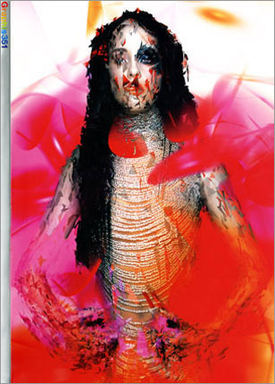 24 Me Company: The garden of digital delights by Hugh Aldersey-Williams

What's real and what's virtual? What's 'design' and what's 'photography'? The London-based image makers of Me Company studio will elude answering these questions. Instead, they will manipulate, merge, and mingle photography, art, science, and truth into a breathtaking private garden.

Swiss designer Ralph Schraivogel signs "a craftsman contract" in poster design, reinventing the canvas into a new medium. Searching inspiration in Bach, jazz improv and M.C. Escher, his "hand made" imagery is built on the dialectical play between free and restricted elements, typographic form, and the texture of photography.

A bobble head hula skirted doll atop the dashboard. A red and yellow billboard. Removable stickers in a magazine insert. A shirt with zip-off sleeves for tanning during driving. A memorable slogan "Let's motor." MINI, more than a culture, has become a design cult. Graphis' business and advertising story gets deep into the process of the Mini brand's reinvention, development, and cloning, telling you how the smallest care in America has become the most award-winning name ever heard in design and marketing circles.

"I'm interested in graphic design as art," Ed Fella says. Take a look: the California-based educator is a fountain of talent, information, ideas, opinions, and observations that illustrate his thoughts through lines. Letter forms, linear shapes, and colors recall spontaneous Surrealist collages--unpredictable, at times absurd, rarely coherent, but always mind-blowing. He transcends cultural clichés and redefines the art of the doodle.

The Beirut-born architect celebrates contradictions: life and death, past and future, remembrance and amnesia. This special essay introduces Khoury's buildings as confrontational creations that engage viewers in a dialogue they would rather not be a part of. Grounded in academic architectural discourse, Khoury perceives his work as anti-intellectual. Driven by emotions and playing with the values of Middle Eastern entertainment culture, Khoury creates memorable places of power.

102 Rocco Piscatello: A study in simplicity and contrasts by Ina Saltz

Piscatello's designs are simple but never simplistic, timely yet timeless. A true reductionist, he makes the ordinary extraordinary, using symmetry, contrast, tension, and harmony. While Piscatello believes that society is searching for refinement, he's committed to showcasing elegance in every project he touches. With sincere passion and Swiss-like precision, he aspires to a better design for life.

120 Guido Scarabottolo: Behind the eyes Interview by Vanessa Fogel

Finding that "something" that's inside your head--more or less behind the eyes--is much more important than any art technique you could ever acquire at school. So sounds Scarabottolo's genuine lesson in simplicity. The Italian artist makes a point in demonstrating endless curiosity and reflects on his responsibility of influencing society through his images. As a successful illustrator and respected editorial designer, Scarabottolo "keeps his foot in two shoes."

132 The Art of Adolf Wölfli Reviewed by Lyle Rexer